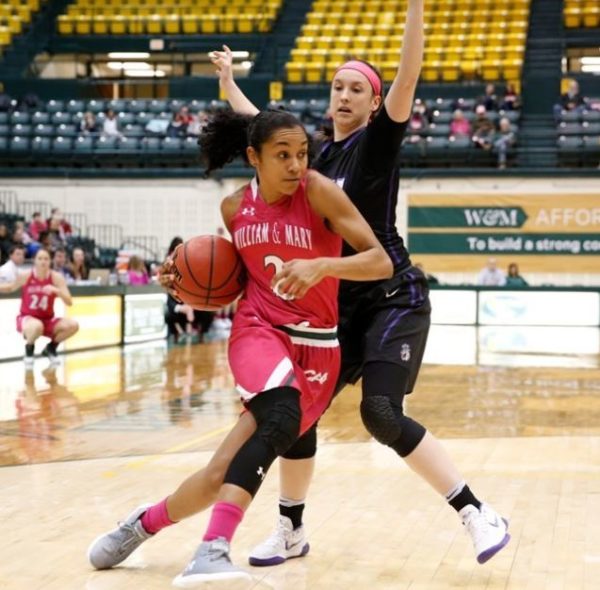 William and Mary had its two-game win streak snapped by Colonial Athletic Association leader James Madison Friday night in an 86-41 drubbing, but the Tribe recovered Sunday with a 75-63 road victory over Towson.

Facing a team like James Madison which had yet to lose in conference play, the College (15-7, 6-5 CAA) held the Dukes (14-8, 10-1 CAA) to 16 points on 37.5 percent shooting in the first quarter. On the other end of the court, however, the Tribe struggled to put points on the board, missing seven of its first eight shots and tallying just 11 points in the opening 10 minutes. Offense proved a struggle all night against the swarming James Madison defense, the College shooting just 25 percent from the field Friday night.

“James Madison plays excellent defense, and they rebound the ball extremely well,” head coach Ed Swanson said. “We couldn’t get in rhythm at all, we couldn’t get anything inside … and when we did, they did a good job doubling and stripping [the ball].”

The Dukes began to pull away as the second quarter began, opening the period on a 12-2 run before Swanson called a 30-second timeout. Out of the timeout, James Madison rattled off another 9-0 run, Swanson calling another timeout to try and stop the bleeding.

By the end of the first half, the Tribe’s deficit had ballooned to 22, the College unable to respond with any scoring runs of its own. James Madison was in cruise control, outshooting, out-rebounding and outworking the hapless Tribe.

“They just beat us up in all facets right from the start of the game,” Swanson said. “They knocked us back on our heels from the get-go, and then we didn’t respond. Their physicality really bothered us on the perimeter, underneath … offensively our shots weren’t falling … and it affected our defense.”

Things got no better for the College in the second half, with the Dukes opening the third quarter with another 9-0 run. James Madison continued to pile it on, shooting over 57 percent from the field in the second half. The Tribe did not help its cause with 13 second-half turnovers, which the Dukes converted into 19 points.

The result well decided before the final buzzer, James Madison closed out a lopsided 86-41 win with little fanfare in the fourth quarter. Four Dukes finished in double figures, led by guard Lexie Barrier with 19. Junior guard Bianca Boggs and senior guard Jenna Green tallied 14 and 12 points for the College, respectively, responsible for 26 of the Tribe’s 41 points.

“We need balance, we need scoring from different positions,” Swanson said. “I didn’t think we stayed particularly in character tonight in terms of doing things we do well first … We need to share the basketball, we’re a high assist team … We didn’t have many assists tonight that led to baskets.”

Unlike Friday night’s blowout loss to James Madison, the Tribe got off to a hot start against Towson (8-14, 3-8) Sunday afternoon. After the Tigers jumped out to a quick 7-0 lead, the College outscored Towson 18-7 the rest of the period, including a 13-0 run to close the first quarter.

The Tribe offense continued to fire on all cylinders in the second quarter, the College scoring 23 points in the period, and headed to the locker room with a 41-31 lead. The Tribe shot over 55 percent from the field in the first half, knocking down five three pointers. Boggs, Green and sophomore guard Nari Garner all scored 12 points in the opening 20 minutes, Garner doing all her damage from beyond the arc with four threes.

Turnovers, however, continued to plague the Tribe as they did against James Madison. The College committed 10 turnovers in the first half Sunday, leading to 14 Towson points, nearly half its halftime total.

The Tribe’s shooting cooled down in the second half, the College knocking down just below 38 percent of its second-half field goal attempts. The second half was also marred by sloppy play, the Tribe and the Tigers combining to commit 11 turnovers apiece.

Towson began to dominate the boards in the second half, grabbing 19 offensive rebounds over the final 20 minutes. However, the Tigers could not find a way to consistently put the ball in the basket, shooting just 27.5 percent in the second half.

With Towson unable to make a definitive run in the second half, the Tribe maintained the lead after going ahead in the first quarter and triumphed 75-63, marking the College’s third win out of its last four games. Green and Boggs once again led the Tribe in scoring with 22 and 21 points, respectively, and Towson guard and forward Nukiya Mayo paced the Tigers with 19 points.

The Tribe returns to action in a road matchup with Delaware next Friday. Tip-off is scheduled for 7 p.m.