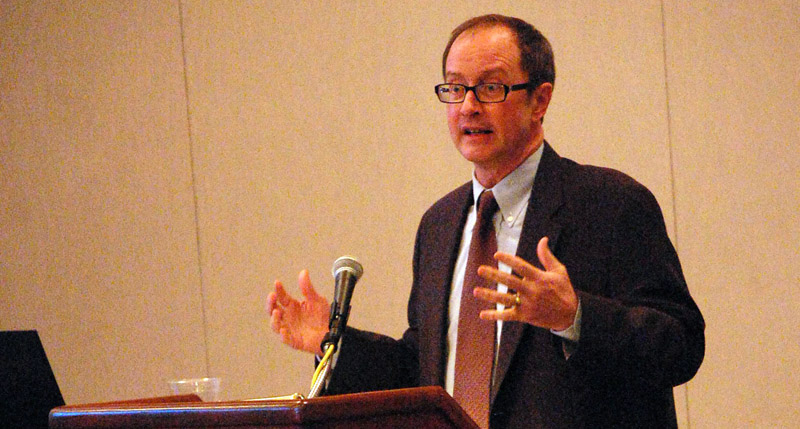 The College of William and Mary community met Dan Conway, a candidate for the position of dean of Arts and Sciences, Tuesday in the ongoing search for a new dean.

Conway’s long career in academia includes most recently serving as head of the philosophy department at Texas A&M University. After completing his undergraduate studies in philosophy and economics at Tulane University in 1979, Conway earned his doctorate degree in philosophy from the University of California San Diego in 1985, going on to teach at Stanford University, Harvard University and Pennsylvania State University.

“The uncertainty that clouds the future presents an opportunity to remind the various stakeholders of the university, including its critics and its skeptics, that education has never been a simple matter of career preparation and credentialization,” Conway said. “[Students] tend to succeed because the education they have received has prepared them to survey their options, to follow their dreams, to channel their passions and to choose a life of commitment and engagement.”

In his presentation, Conway addressed the six challenges put forth under the College’s recent strategic plan with a comprehensive response. He also emphasized his commitment to fighting for the arts and sciences on all fronts.

“If invited to lead the faculty of Arts and Sciences, I would take it as my responsibility to defend the value of tenure-protected basic research and academic freedom,” Conway said. “Having battled a highly politicized disinformation campaign in the state of Texas, I believe I’ve learned a few things about how best to defend the value of education to an increasingly-skeptical and increasingly-politicized citizen.”

Among some of Conway’s more ambitious goals, 100 percent student participation in subsidized study-abroad programs and 100 percent student involvement in alumni-backed internships stood out. Conway noted such goals would require an intensification of current fundraising and development efforts by the next dean.

According to Chancellor Professor of Physics Gene Tracy, who is currently serving as interim dean, the position requires not just administrative ability but also people skills.

“You need to listen well … you need to have patience … you need to realize that you can’t solve all problems and you can solve some, and you have to be able to prioritize,” Tracy said. “Bright, talented, passionate people oftentimes disagree about things. Most of the time you can still work together constructively, sometimes that becomes more of a challenge.”

Although the forum lacked a student presence, since nearly all of the forum’s attendees were faculty members, the dean of Arts and Sciences along with the support staff plays an integral role in student affairs.

“The people in this office, for example, often don’t interact with the students. They interact with chairs, program directors, some of the faculty…but they know the mission of this place is education and research, and that all affects the students,” Tracy said. “People choose to work at a place like this because they believe in the mission.”