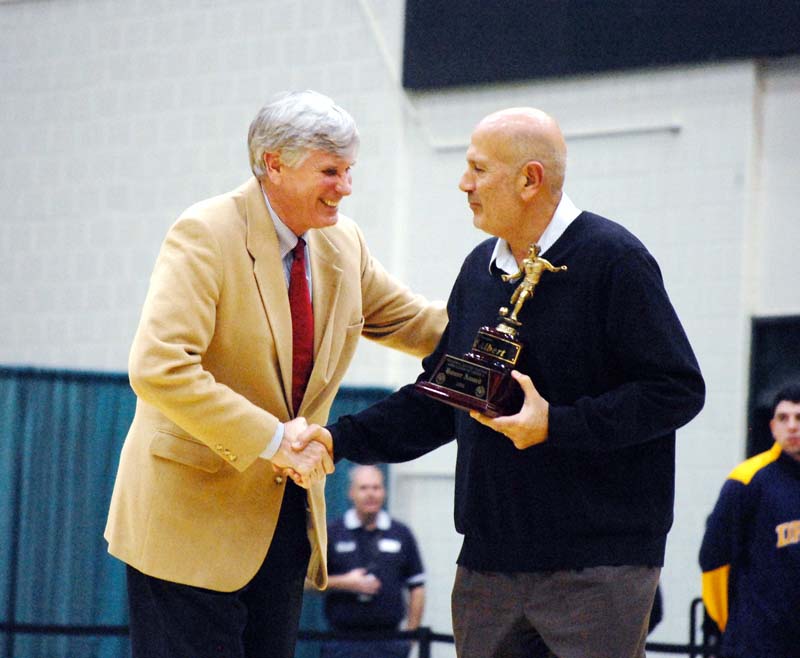 The Honor Award, a recognition coveted among soccer coaches around the country, is presented by the National Soccer Coaches Association of America to one recipient each year. Former College of William and Mary men’s soccer coach Al Albert ’69, now the Associate Director of Athletics, was the 2011 recipient of the Honor Award at the Jan. 13 event in Kansas City, Mo.

“If you look at his biography over the years, he hasn’t just been an icon on campus,” Ray Cieplik, member of the NSCAA and creator of the organization’s charitable Foundations Committee, said. “He has established himself as a knowledgeable person both locally and regionally in Virginia through his many youth developmental programs, helping the philanthropic arm so that young boys and girls can play soccer despite their socioeconomic status.”

The committee that selects the candidates each year has a list of hundreds of eligible members. The coaches must have been part of the association for at least 20 years, devoted much of their careers to promote the sport of soccer and put years of meritorious service into the soccer community at all levels along with the NSCAA.

“I was mostly surprised and a little emotional,” Albert said. “I have been a member for 40 years and started going to the dinners early on and saw some of the greatest soccer coaches of all time receive it and it’s unbelievable to be receiving the same award as they did. It’s a really big deal, and I really didn’t see it coming.”

While Albert was head coach at the College, he had 29 consecutive winning seasons — 26 in a row with 10 or more wins. He coached numerous alumni that went on to have professional soccer careers, and one player, Jon Stewart ’84, became a television icon.

Albert has a special interest in the philanthropic side of soccer. In recent years, after head coach Chris Norris took over the College team in 2003, he has been more involved in trying to make it a mainstream sport in the United States. It has long been an upper-middle-class sport due to expensive recreation fees and travel team dues, which leave a large proportion of children and adults in the population without access to the sport. This differs in most international communities, where socioeconomic level usually does not prevent anyone from playing soccer.

Albert’s work in various organizations has not only touched the lives of people in the College community but also the lives of people around the world. He has coached in the Maccabiah games, an international Jewish athletic competition, and helped to establish the Urban Soccer Collaborative, a youth development initiative. Albert has also served as the NSCAA president and led many philanthropic organizations to aid coaches and children in underprivileged communities.

“He is a humble man and not a self-promoter,” Cieplik said. “He really lets his actions speak for him — as a communicator, when rallying people to causes, or when becoming involved in organizations that join together for the good of the soccer community.”

“You have a lot of coaches that deal with the x’s and o’s of the game, but Al transcends that,” volunteer assistant coach Tom Duffy said. “He looks at each individual player, and then the team as a whole. Through the NSCAA, Al has really provided an umbrella for other regional groups to become a larger and more active part of the soccer community.”

This enthusiasm and love for the game has served not only to inspire the players, but his coworkers as well.

“He is a great leader and a great mentor. He is a down-to-earth person, somebody you can talk to about things— pick his brain and ask his help choosing directions or developing coaching philosophies,” assistant head coach Charles Connelly said. “He’s great with the kids and in coaching, and he cares much more about the team than he does himself. It was only a matter of time before he received this tremendous award.”