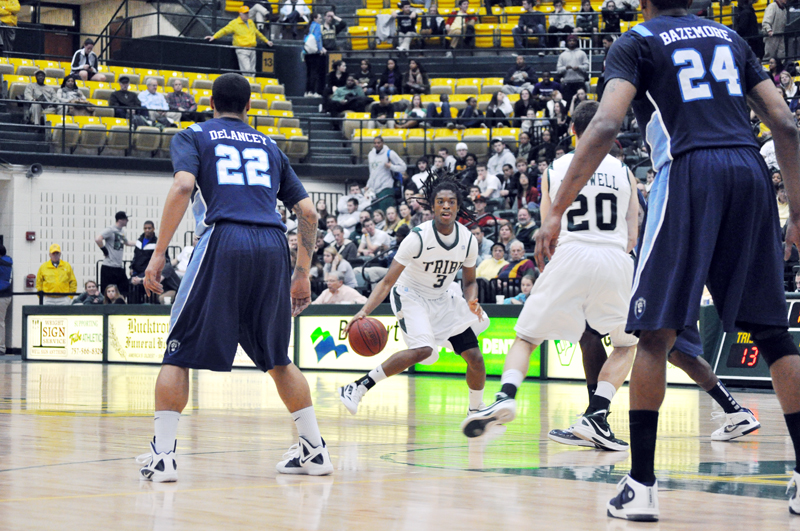 After perhaps the best week of its season William and Mary had its momentum abruptly cut off in a 73-65 loss at Virginia Military Institute Saturday.

Despite outscoring the Keydets 20-8 through the first nine minutes and nine seconds of the game, and four Tribe players scoring in double-figures, a VMI run late in the first half was too much for the College (5-24) to recover from.

Coming off a resounding win over Northeastern and a two-point loss to CAA-leading Drexel, senior forward Quinn McDowell — who finished with a team-high 15 points, five rebounds and five assists — was disappointed in the team’s lack of focus.

“It’s pretty disappointing,” he said. “For the last two games [coach Tony Shaver] had been pretty excited about the way we were playing and for the first time all year it felt like we really had something going. We were playing really well together as a team and figuring out what it means to play hard all the time, and we didn’t do that. We didn’t have the focus that we needed today.”

A three from senior forward Quinn McDowell gave the College its biggest lead, 20-8, with 10:51 left in the half, and the Tribe looked poised to roll through the Big South opponent.

But things started to turn when the Keydets began to exhibit their athleticism in the paint. With the College up 24-13, freshman guard Marcus Thornton had his layup blocked by VMI guard Jarid Watson, turning into an easy fast-break bucket by guard Keith Gabriel. Sophomore guard Brandon Britt tried to respond with a baseline floater but missed everything, and VMI guard Michael Sparks knocked down a three-ball on the ensuing possession. Suddenly, the Tribe’s lead was down to six with 8:18 to play in the first.

Rather than keeping composed and weathering the Keydets’ run, the College grew sloppy, and on the next possession senior guard Kendrix Brown had the ball ripped away from him at the top of the key by VMI forward Ron Burks, who took it the other way, drew the foul from Brown, hit the layup and sunk the free throw for a three-point play.

“We talked a lot before this game that this would be a game of runs,” Shaver said. “When you score the ball the way they do, a 10-point lead doesn’t mean anything. … When they made that run we looked a bit like deer in the headlights, not keeping our composure and that allowed their 10-point run to become a 20-point run.”

VMI took a 39-30 lead into halftime, but the College fought back. A layup from junior guard Matt Rum cut the deficit to one with 14:11 remaining, and a few minutes later McDowell put the Tribe up one with a layup of his own. But it wouldn’t last, and a 5-0 run from the Keydets put the College in a hole from which it wouldn’t escape.

Neither team shot the ball particularly well, as the Tribe connected on just 37.9 percent of its field goal attempts and VMI shot just 39.3 percent. But the College was plagued by miserable three-point shooting in the second half, going 0 for 10 from beyond the arc in the final 20 minutes, 4 of 22 on the day.

“I thought we had great looks in the second half and — myself included — we weren’t knocking them down,” McDowell said.

“They’re very athletic,” Shaver said. “They’re not big, but they’re athletic and I was surprised at the number of blocked shots, I really was.”

Sophomore forward Tim Rusthoven was a bright spot, logging a double-double with 14 points on 5 of 8 shooting and pulling down 10 rebounds. But freshman guard Marcus Thornton — typically one of the College’s offensive sparkplugs — turned in perhaps his worst performance in the green and gold, going 0 for 6 from the floor and turning the ball over three times in a scoreless game.

The Tribe faced a scary moment late in the game when trying to mount a comeback. After a jumper from Britt cut VMI’s lead to four with 1:15 to go, the sophomore came up with a steal on the ensuing VMI inbound, drove to the basket and got his shot blocked by VMI’s Quinton Upshur. There was contact on the play and Britt went to the floor underneath the VMI basket writhing in pain and grabbing his left knee. After a few minutes he was helped to the bench and replaced by Thornton. Britt left with 14 points on 5 of 18 shooting. Shaver said he didn’t know how serious the injury was.

The College will be back in action when it hosts Hofstra Wednesday.