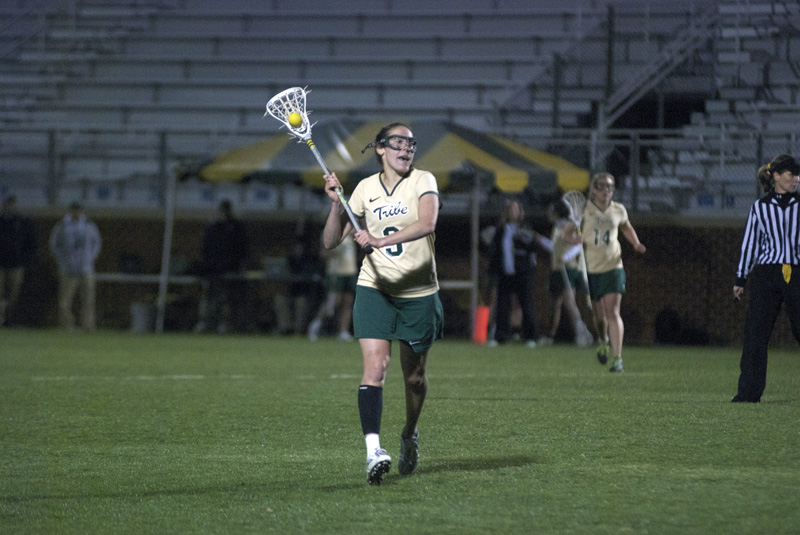 William and Mary saw its two-game win streak snapped as the Tribe lost to No. 1 Northwestern in Illinois, 19-7. The undefeated Wildcats controlled the game from start to finish, never allowing the Tribe to take a lead.

Northwestern (6-0) opened the scoring with a two-goal salvo in the opening four minutes and 46 seconds, getting unassisted scores from Taylor Thornton and Jessica Russo.

Graduate attacker Maggie Anderson responded for the College (2-4) to bring the game within one at the 24:09 mark, finding the back of the cage off sophomore midfielder Katie Stillwell’s assist.

That would be as close as the Tribe would get all day, as Northwestern then went on a 9-2 run to finish the half with a comfortable 11-3 lead. Sophomore attacker Taelor Salmon and junior attacker Krystin Mackrides scored for the College but Thornton and Russo each added two more goals, and the Wildcats’ Shannon Smith also contributed two scores before the halftime whistle.

Kelly Rich, Alyssa Leonard and Kara Mupo all netted one apiece as well to round out a huge first-half offensive effort for the Wildcats.

Coming out of the break, Northwestern ripped off another long run, scoring seven unanswered goals to extend the lead to 18-3.

Mupo and Rich each added their second goals of the match while Erin Fitzgerald found the back of the net twice, and Beatrice Conley, Brooks Lawler and Ali Cassera all chipped in one goal apiece. Cassera’s goal at the 4:51 mark topped off the Wildcat’s scoring at 19 goals.

The Tribe was held scoreless from halftime until  7:09 remained in the game, when freshman attacker Kaleigh Noon scored an unassisted goal.

From Noon’s goal until the final whistle the College outscored the Northwestern 4-1, but could not cut into the Wildcats’ large lead. Sophomore attacker Jena Dougherty scored an unassisted goal and Noon netted her second unassisted goal of the day. With six seconds remaining, freshman attacker Ellen Shaffrey scored off freshman attacker Amanda Johnson’s assist to close the scoring for the College.

Northwestern led every offensive statistical category, holding an 18-11 advantage in draw controls and a 17-14 lead in ground balls. The Wildcats also went 5 of 12 off free-position shots, while the Tribe failed to garner a single free-position opportunity all game. Freshman goalie Lucy Ferguson made seven saves in net for the Tribe.

Aside from failing to produce offensively, the Tribe had difficulty with the Wildcats’ style of play, accumulating 17 fouls in the first half and 16 fouls in the second half. Senior defender Denise Lenihan rounded out the physical play with a yellow card at the 26:17 mark in the first half.

Saturday wasn’t the first game of the season in which the Tribe took on a nationally high-ranked team. The College opened its season against Duke — which, at the time, was ranked No. 5 in the nation — and lost before falling to No. 2 Maryland on the road.

The season won’t get much easier anytime soon. The College’s next two opponents are ranked in the top 10. The team’s next game will be against No. 8 University of Virginia at home Wednesday. After that, the Tribe will stay in Williamsburg to host No. 5 Florida.