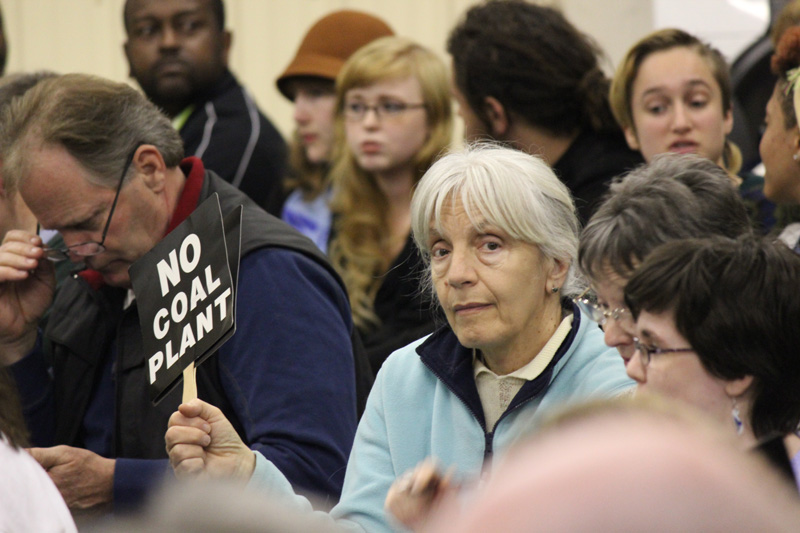 The prospect of the largest coal plant in the state of Virginia being situated a ferry’s ride away from Williamsburg has led some town residents and College of William and Mary students to speak out at town council podiums in disapproval.

Their concerns were disregarded, however, when the Dendron Town Council members voted unanimously March 5 in favor of allowing the Old Dominion Electric Cooperative to build the coal plant.

Despite strong opposition from area residents, the town council approved two measures previously recommended by the Surry Zoning Commission that laid the groundwork for the coal plant’s construction. The first measure called for Dendron, a small town located across the James River from Williamsburg in Surry County, to be re-zoned as a commercial and industrial space. The second measure recommended a conditional−use permit for the coal plant. Both were approved by the seven-person town council a week later.

This approval dealt a serious blow to the College’s Student Environmental Action Coalition, which has been campaigning in opposition to the coal plant for two years.

Jaclyn Carroll ’13, who has been working closely with SEAC on the Surry Coal Plant Campaign, has seen evidence of local opposition since the beginning of her involvement.

“On one level, there is massive opposition to this project locally,” Carroll said. “When you go to a hearing and you see so many people speak in opposition to a project and you see the town council unanimously vote for it, you wonder why.”

“The majority of people at all of the hearings, including what I have seen myself, have been opposed to it, so the planning commission and town council are just blatantly ignoring the people,” SEAC member Sharon Hertzel ’14 said. “It is a disregard for what the people want.”

The Surry County Planning Commission reviewed and recommended the proposed coal plant project on behalf of the town of Dendron.

“Surry County supported the town of Dendron with our planning commission review of the project on behalf of the town,” Director of Planning and Community Development Ronda Mack said. “The local decision-making is complete, so now there are a number of environmental and other permitting activities that occur at the state level that have to be approved before the project can move toward construction.”

ODEC began the construction process in 2008, but encountered a number of obstacles. For almost two years, a decrease in demand for energy slowed the pace of the project. In addition, ODEC was waiting for the release of new EPA standards for coal emissions.

When the project restarted in 2010, ODEC sought approval from the town council, but when the council vote was held without announcement at the preceding meeting — in violation of regulations — a local lawyer sued ODEC. The council decision was vacated in December and the process had to begin from scratch.

“They announced at the meeting before that they would not vote at the next meeting, just that it would be open for public comment, and then they voted,” Hertzel said.

The hearings last week put the fate of the coal plant back into the hands of local politicians for the second time, and SEAC attempted to redouble its efforts to sway the council.

Last semester, SEAC began a petition on campus against the coal plant and collected 200 signatures against the project.

SEAC hopes to draft a letter of concern directly from the College itself.

“The ideal goal would be for the College to write a letter of concern about it, but a huge part of petitioning is getting the word out to students,” Hertzel said.

According to ODEC, the plant will omit 3,000 tons of sulfur dioxide, more than 3,000 tons of nitrogen oxide, 44 pounds of mercury, and 11.74 metric tons of carbon dioxide every year. Critics of the coal plant point to these numbers as evidence that the coal plant is more detrimental than beneficial to the surrounding communities.

“It is going to have a detrimental impact on our environment and on the health of the people who live in it, both in Surry County and all of the downwind areas — of which we are one,” Hertzel said.

In addition to their environmental concerns, some residents argue that the coal plant will be useless to the community, since ODEC is a cooperative and energy produced at the plant will not go to the people living in or around Dendron.

“It is going to be built in an economically disadvantaged community,” Hertzel said. “The energy that is going to be created there isn’t even going to that community. In addition to taking advantage of the community, they have already proven to be a bad corporate neighbor.”

Some locals worry that the jobs ODEC has promised to create will not materialize.

“I think that there have been a lot of promises that ODEC has made and then not put on paper, about jobs and about tax revenue and about peoples’ property values going up, but they have not established [these] on paper in any of their processes,” Carroll said. “The town council hasn’t pushed for them.”