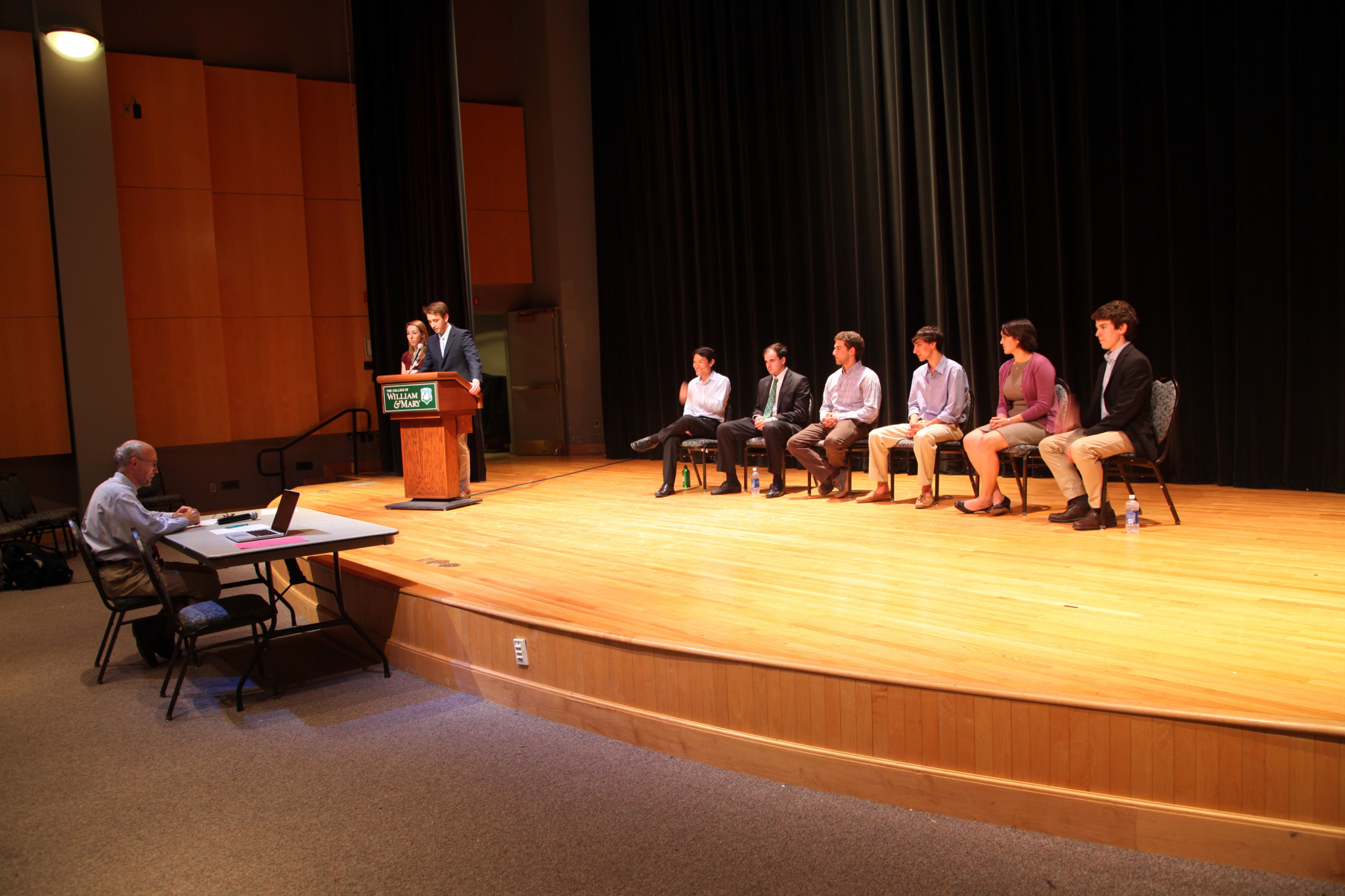 Six Student Assembly presidential candidates sat before a small crowd of their peers Sunday night. One by one, they stepped forward and attempted to tackle the disillusionment that they all claimed the organization faces.

The candidates included Andrew Canakis ’13, David Alpert ’13, Grace Colby ’13, Curt Mills ’13, Noah Kim ’13 and Dallen McNerney ’14. Each of the vice presidential candidates attended as well, along with a crowd that filled roughly a third of the auditorium. Chancellor Professor of government Clay Clemens moderated the debate, which was hosted by the SA Election Commission.

Kim was the first to step up to the plate, emphasizing effectiveness, transparency and systemic reform.

“Between Sky’s strong new vision and my experience in the [student] body we offer a stronger new vision and more proven effectiveness than anyone else on the stage,” Kim said. “That’s why we are asking for your vote — in order to change the Student Assembly from the ground up.”

Alpert took the time to address his passion for improving mental health on campus and infusing the election with maturity.

“In light of recent events in the last couple of years we really have the opportunity to take this sort of teachable moment and really push William and Mary forward . . . The most important thing to me about this campaign is having a mature and adult conversation,” Alpert said. “Our website . . . is . . . a top 10 list of ideas that we [Alpert and Moore] think are actually achievable and measureable, and that is what we owe you as fellow adults — to talk about what we think is achievable and what you can expect from us.”

Where SA veterans emphasized their experience and past efforts to reform the governing body, Canakis embraced his outsider status with regard to the SA as precisely the reason why he wanted to run.

“I feel like the SA is very broad and people who come in as freshmen are inculcated into how it works,” Canakis said. “We’re outsiders: We want to shock the system, use it, and bring new ideas to it.”

Yet even the veterans desired to jolt the system on a policy level. McNerney explained his plan to do away with the top-down approach of the SA and make it more inclusive of student body desires.

“We looked at what the SA was doing, the approach it was taking, and decide that it wasn’t effective and wasn’t what the [SA] should be doing,” McNerney said. “Right now we have a top-down approach to the [SA]. People are elected, people get positions, and we feel like they don’t necessarily represent the ideas of students themselves; they’re very much the ideas, the initiatives, the agendas of individual people as opposed to the student body as a whole. So we’d like to promote a grassroots approach to the whole system.”

Instead of systemic reform, Colby emphasized a celebration of the uniqueness of the College community.

“[The College] is such a special place, and it’s filled with students who do incredible things,” Colby said. “We think the [SA] is all about attitude, it’s all about setting the tone at [the College] to make sure that everyone is recognized for the amazing things they do here, and we think we are definitely the people to send that message out across campus and get everyone involved.”

Colby’s desire to ensure that the SA sets the tone of the College campus and gets more groups involved in campus events stood in contrast to Mills’s agenda to overhaul the way the SA works.

“We are the only ticket that is running on fundamental change to how the SA does business ,” Mills said. “We’re going to rework the finance process, we’re going to reemphasize public affairs, we’re going to bring the campus together, and we’re going to save the [SA]. The [SA] right now  . . . has got serious problems with the way it’s doing business. You’ve got three people running for class senate in our class, you’ve got people not occupying positions left and right.”

Questions from the audience dealt with the SA’s recent negative attention pertaining to accusations of bribery and mismanagement of funds. Kim was grilled by Ishan Bardham ’13 for espousing his efforts to reform finance as a member of the SA while denouncing the widespread mismanagement of SA funds.

“I have really worked hard to implement finance reforms, as I’ve said, to make that spending more transparent and more accessible, but it needs to happen on an organization wide change,” Kim said. “Every single member of the Student Assembly needs to be held accountable. Unfortunately, as finance chair last year and senate chair this year . . . I haven’t been able to institute this systemic change that needs to happen.”

A law school student gave Alpert the upper hand by addressing his question directly to him in gratitude for Alpert reaching out to the graduate students. Explaining that Alpert had spoken at a Student Bar Association meeting earlier in the week, the law school student asked how Alpert would improve relations between the College’s undergraduate and graduate schools.

Alpert’s response emphasized that if elected, he would work to make sure graduate students would benefit from their activities fee in the best way possible.