Home Variety Ruined: Play makes a commentary on exploitation at the College 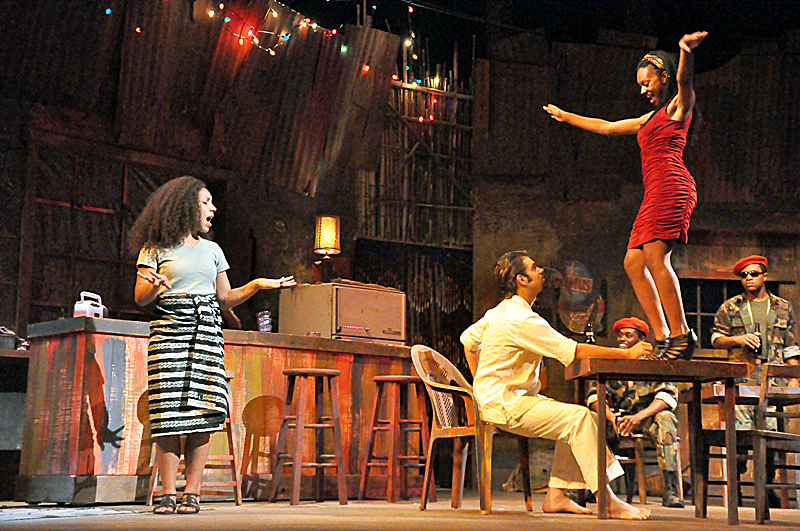 Unspeakable horrors are spoken with chilling regularity in “Ruined,” Lynn Nottage’s Pulitzer Prize-winning account of life in a Congolese brothel, and what’s most surprising about the repeated retellings of commonplace atrocities is the power each utterance contains. The crimes committed against these women are so sickening that there is no way for the mind to process them as anything but monstrous aberrations of common human decency, yet the characters have experienced it all. Family murdered? Children kidnapped? Your very womanhood “ruined?” Have another beer, my friend. The band plays on.

However, the raw, unflinching monologues of the victims in “Ruined” only make up a portion of the play’s shocking strength. By structuring the action in a traditional dramatic arc, Nottage removes any extraneous concerns about formality or experimentation and makes the focal point of the drama these women and their appalling treatment by men. We are eyewitnesses to the dissolution of any comfort that could be found in Mama Nadi’s (a mesmerizing Tamara Middleton ’14) pleasure palace, as the ravages of civil unrest find their way into the bar and take hold for good. The affiliation of the troops in Nadi’s brothel is of no consequence, as men from each side take turns one-upping each other for the most stomach-turning act of war when not abusing the girls offered. More than the Belgian chocolates Nadi enjoys or the uncut diamond she covets as an “insurance policy,” this is the legacy of colonialism: The unending pillaging of the Congolese people by their own countrymen. Artisia Green’s production is a taut, capable rendering of this awful reality and an especially worthy send-off for the theater, speech, and dance department’s 2011-2012 season.

Anchored by Middleton’s simultaneously warm and hard-hearted turn as Nadi, “Ruined” is at times lacking in empathy but all the better to drive home the struggles of the very real people the characters represent. The stories of women like Salima (Bria Brown-Farris ’15), taken from her home by soldiers who killed her infant child, are if anything sanitized disclosures of far worse wrongs. Brown-Farris is a dynamo of vengeful and righteous anger and becomes the tragic nexus of “Ruined,” more so than even Leah Beyer ’14’s Sophie, whose heinous abuse lends the play its title. Salima’s suffering is unfettered and emotional; Sophie hurts silently, masking her shame and revulsion behind her songs and education. The revelation of her torment is a quiet admission, one almost whispered for fear of giving her anguish ground in the battle for her sanity. It’s a set of performances that runs the gamut of reaction to the despicable, made better by a supporting cast dedicated and determined to provide context for the three main actresses.

If you’ve been counting the synonyms for “disgusting” I’ve used thus far, you’ve realized this is not a light evening at the theater. These graphic portrayals of the revolting day-to-day in the Congo barely scratch the surface of the truth the characters signify, but as a piece of theater that relates such cruelty in a barely-palatable manner for a mainstream audience, “Ruined” is a powerful work of art. Going to a play won’t bring back Salima’s daughter or fix the irreparable damage done to women like Sophie each day in the Congo, but it will, perhaps, convince us to do something for the people lucky enough to have survived, and try to prevent similar atrocities in the future.