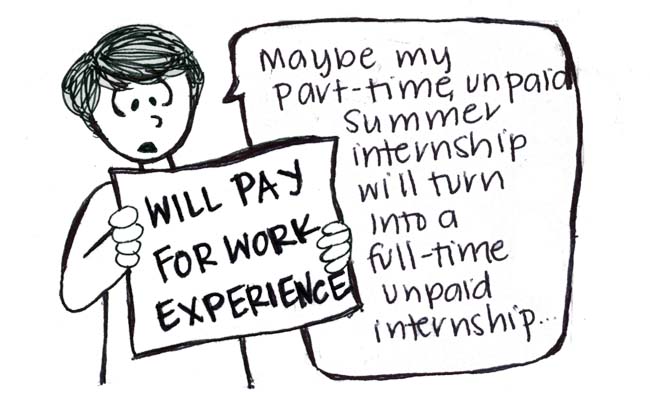 Most college students don’t find summer internships valuable in terms of real-world work experience, according to a recent poll by Northwestern Mutual. Results showed that 68 percent of summer interns were not completing the daily work that they envision doing in their long-term careers.

Because internships are generally unpaid and sometimes involve mindless or even demeaning tasks, they tend to get a bad rap. I’ve often heard interning compared to fraternity pledging. Okay, I can see it: They yield no immediate reward, drag on for weeks, and often involve scrubbing. But there are more than enough benefits to internships to make them worthwhile.

Here are the top four reasons that you should be glad you’ve scored one for next summer.

1. Resume boosting: Did you know that about half of recent college graduates are unemployed? Yikes. Competition for jobs is fierce, so — regardless of the difficulty of tasks performed — there are few things more satisfying to college students these days than adding a legitimate bulletpoint to their resumes. Another benefit is that it will open doors for you. Whether it’s a reference or a connection for a job after graduation, it helps.

2. Learning curve: When, in the first week of my internship, my boss asked me to perform a task involving Google Analytics (which I’d never heard of) and Excel (which I hadn’t used since fifth grade computer science class), I momentarily contemplated faking my own death and escaping forever. But I resolved to somehow figure it out. Also, all of the office windows were painted shut. I had to ask about a hundred questions, but I got the hang of it eventually. My boss, like all good bosses, recognized that the internship was as much for my benefit as for his. In fact, I have a feeling that he didn’t really need those data charts.

3. No salary to steal your enjoyment: When people are paid to do a task, they tend to reap less gratification from the activity itself because the money gives them all the satisfaction they need for performing it. With no monetary reward, we are forced — or rather able — to find enjoyment and gratification in the tasks themselves.

4. Built-in escape route: If, by the end of the summer, you’ve decided that this company is not for you, then remember to be grateful that the position is, by definition, temporary. Instead of complaining about the boring office where you wasted three months, be happy that you’ve learned a little more about which career path you don’t (and, by process of elimination, do) want to take. The bonus is that you don’t have to deal with the uncomfortable process of quitting.

So, there you go. Unpaid internships have their downsides, but they’re worth it in the end. You can remind yourself of that fact the next time you’re fixing a paper jam in the office copy machine.