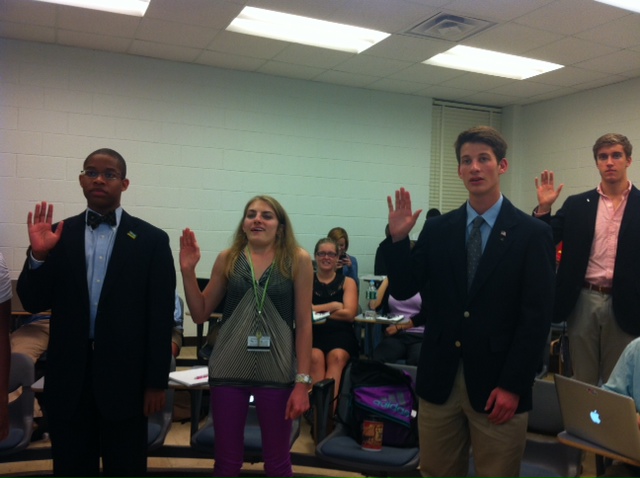 Elections Commission Chair T.J. O’Sullivan ’13 briefed the Student Assembly Tuesday on the successes and setbacks of the latest election.

“There were a fair number of write in candidates. I believe Cap’n Crunch did reasonably well,” said O’Sullivan. “It was actually pretty impressive in terms of voter turnout.”

He described the class of 2016 elections as especially contentious.

“There were a lot of freshmen running for the Student Assembly senate,” O’Sullivan said. “I was really impressed by the number of people interested in running in this election. Overall, the class of 2016 had around a 50 percent voter turnout.”

Despite the removal of two candidates from the ballot, sign-tearing complaints and conflicts with Extended Orientation, Student Assembly Vice President Melanie Levine ’14 thought the election in general proceeded relatively well.

“This was actually a very smooth election cycle compared to past elections,” Levine said.

Nine candidates were sanctioned in the SA presidential race last spring. O’Sullivan and Mills attributed the decrease in sanctions to a better enforcement of the rules rather than to changes in the rules.

“Our program is plagued by long wait times and a lot of inefficiencies,” Moran said. “We really want to improve our transparency. In conjunction with the Programming Club, we’re developing an app that will automatically manage routes, give directions and decrease wait time.”

The Act will provide Steer Clear with a data plan and tablets, technology that Moran hopes will help the program become more efficient.

The senate then discussed the Wall Street Journal and Economist Act, which will provide students with easier free access to the publications.

Madame Chair Kendall Lorenzen ’15 outlined another aspect of the ongoing “What Can the SA Do for You?” campaign. Senators will now table during high traffic hours in order to better understand issues important to the student body.

Levine went on to voice her support of the SA’s new policy regarding Homecoming grant applications. This year, grants are available to a wider variety of student organizations. The deadline to apply is Friday at five PM.

“It’s really exciting that the Student Assembly has decided to allocate grants to everyone this year, not just Greek organizations,” Levine said. “Hopefully we’ll soon be getting some great requests for awesome events.”

The senate also welcomed newly elected undergraduate officers and senators to their inauguration. The freshman class senators opened the meeting with their rendition of the Alma Mater.

At the meeting’s conclusion, Chairman of the Review Board Scott Hardy J.D. ’13, swore in the new undergraduate senators and officers.