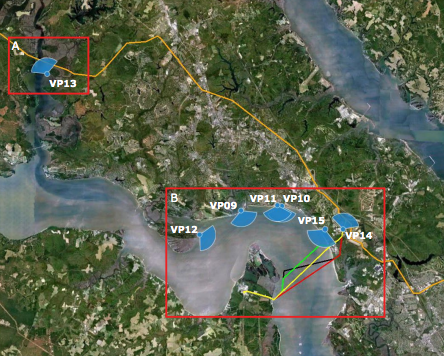 The College of William and Mary, along with Preservation Virginia and the Colonial Williamsburg Foundation, co-authored a letter of protest to the Virginia State Corporation Commission Oct. 10. The letter expresses disapproval of a proposed Dominion Power transmission line that would run across the James River from Surrey to Skiffes Creek.

Bearing the signature of College President W. Taylor Reveley III, the letter cited concerns that the proposed 500kV transmission line installation would compromise the purity of the Historic Triangle and threaten the touristic well-being of the Jamestown-Yorktown-Williamsburg region.

“Our concern is modern intrusions such as the power line,” Malon said. “Its scale and obvious incongruity in an historical view shed would … compromise an essential component of why people come to visit the Williamsburg area.”

Malon noted that the visibility of the transmission line within the historic region would seriously undermine the tourist’s aesthetic experience.

“What must also be preserved is the integrity of the area and its ability to transport visitors’ minds back in time to the historical events that happened in this place,” Malon said.

Preservation Virginia, along with the College and Colonial Williamsburg, are in the process of applying to designate the Historic Triangle as an UNESCO World Heritage site.  The letter expresses serious concern that the installation of this transmission line could jeopardize accreditation.

All three parties involved in the letter are invested in this economic system, and the letter expresses that the installation of the power line could have serious ramifications on the economy.

Brian Whitson, Associate Vice President of Communication and University Relations at the College, noted that the College has a very important stake in the issue.

“As an important cultural and educational partner, [the College] fully agrees that the beauty and historical significance of this stretch of the James River should be protected,” Whitson said. “Ensuring that the greater Williamsburg area remains a vibrant tourism destination is to the benefit of all of us in the Historic Triangle, including William  and Mary.”

The issue also presents an environmental concern for the College Student Environmental Action Coalition, or SEAC.

“It just sets a bad precedent for altering a landscape from its original condition,” Rosemary McDermott ’15 said.  “If anything, it could lead to a domino effect.”

A public hearing concerning the installation of the power line was held by the State Corporation Commission on Oct. 24 in Williamsburg and will continue in Richmond on Jan. 10.  If approved, construction would begin in late 2013.