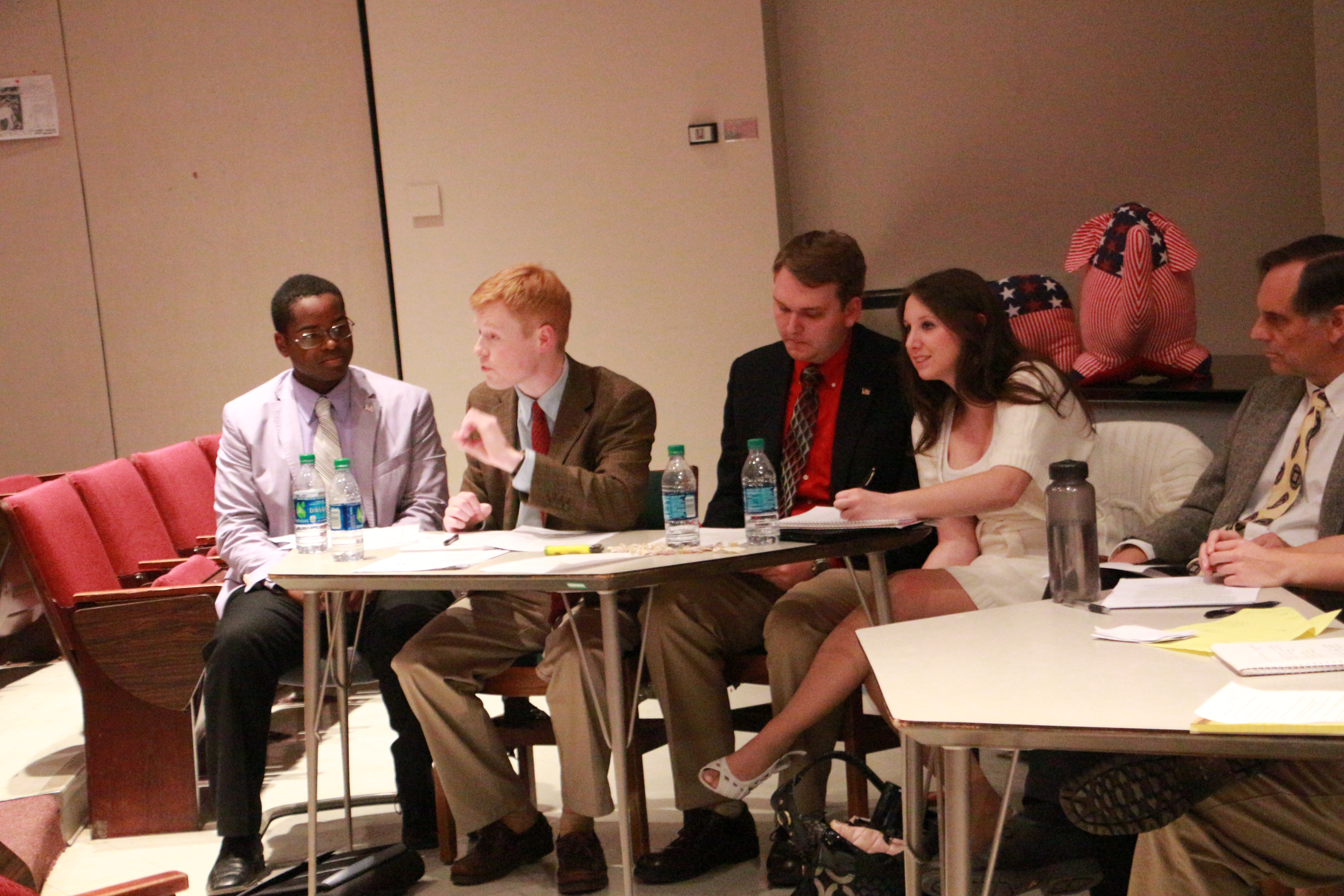 A troubling economy, increasing college tuition rates and foreign policy were at the forefront of the Young Democrats and College Republicans debate Nov. 1.

The groups faced off in a debate in teams of four with government professor John Gilmour moderating the discussion Thursday night.

At the start of the debate, the Young Democrats were confronted with the question of what President Barack Obama should do differently if re-elected.

“The biggest problem facing our economy right now is the lack of jobs,” Michael Payne ’15 said. “In order to approach this problem, what we have to do is continue to invest heavily in infrastructure, invest in education, and invest in things that will make our labor force more skilled, more productive and more able to compete in the global economy.”

The Democratic side expressed concerns that if presidential candidate Gov. Mitt Romney were elected, the economy would suffer.

“Representative Ryan’s proposed budget in Congress cuts many of these areas we are investing in such as education and infrastructure,” Elise Orlick ’15 said. “They are going to have a long-term detrimental effect on the economy and would stop this job creation.”

The College Republicans stated that there is a distorted view of Obama’s work on job creation.

“Economic growth, there is no such thing anymore in this economy,” David Branton ’13 said. “The unemployment rate just recently went under 8 percent, and these private sector jobs that he talks about is actually a distortion. Sure, there is a large quantity of jobs out there, but they are not of quality.”

Branton stated that there has been minimal progress during the Obama administration.

“All you are doing is reiterating the failed policies of the past four years,” Branton said. “Ask yourself, are you better off now? The answer is no.”

Both sides emphasized the issue of rising college tuition rates.

“Under the Obama administration, the cost of college education has risen by 25 percent, and student debt has reached a record of $1 trillion,” John Gunnison ’13 said. “One of the reasons that the cost of college has gotten so high is because President Obama has cut private lenders out of the federal loan market. The entire concept behind this theory is that banks are evil and they do terrible things and we don’t want them anywhere near our children.”

As a member of the College Republicans’ side, Gunnison argued that Romney’s methods in reducing the costs of college were very successful in the past.

“As the governor of Massachusetts, Governor Romney has proven a commitment to decreasing the cost of higher education,” Gunnison said. “He started an initiative called the John and Abigail Adams scholarship, which offered four years of tuition free scholarships to people in the top 25 percent of high school graduates.”

In their rebuttal, the Young Democrats argued that Romney raised college tuition during his time in Massachusetts.

They also called into question other Republican claims.

“I just want to make one point fact-checking the other side,” Zachary Woodward ’14 said. “[Gunnison] mentioned the John and Abigail Adams scholarship. I am from Massachusetts and I was a recipient of that scholarship and it amounts to just about $300 a year; it does not pay the entire tuition, so it should not be a model.”

“President Obama has doubled the size of Pell grants while increasing their accessibility as well as creating the American opportunity tax credit which provides up to $10,000 per student over the course of four years for attending college,” Orlick said.

The groups also disagreed on the topic of foreign policy, specifically the issue of the Middle East.

“We cannot override the actions of a democratic people,” Young Democrats member Jakob Stalnaker ’16 said. “We can’t just go into a country because we don’t like their leader. That being said, we are most concerned with American interests abroad and we will always do whatever is necessary to defend those. It’s about smart foreign policy, not just immediately creating a war. The fact of the matter is, we don’t want another Iraq.”

The College Republicans used the debate techniques of Vice President Joe Biden in their rebuttal.

“I think that those last three minutes were the biggest piece of hogwash, or malarkey, that I have ever heard,” Gunnison said. “The problem here is this concept of these liberal regimes; elections do not equal liberalism. If we expect that countries in the Middle East can become democracies overnight, that represents a fundamental misunderstanding of what liberalism actually means.”

During their closing arguments, the College Republicans emphasized the problems that the current economy poses to college students.

“We need reform, and that has not happened under the Obama administration,” Marcell Crawford ’16 said. “We, as college students, really need to focus on our education and our jobs, and these jobs are simply not available for us.”

The Young Democrats focused on Obama’s successes  over the last four years for their closing arguments.

“The first bill that he ever signed into law was the Lilly Ledbetter Fair Pay Act,” Woodward said. “Obamacare was the first large scale comprehensive attempt at universal health care. He has ended the two most extensive and costly wars that the United States has been in in recent history. He brought Osama bin Laden to justice. In the next four years, he has developed a comprehensive plan to continue on the path to success.”