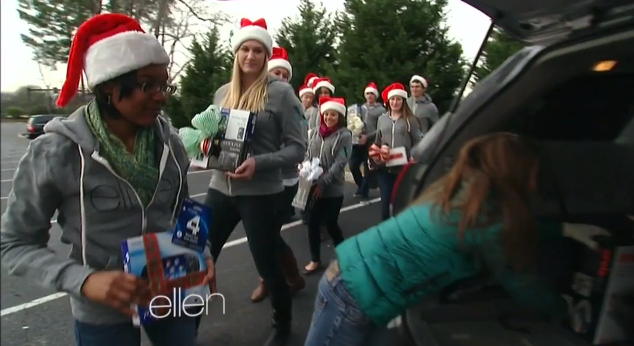 The College of William and Mary is home to students with diverse interests: It houses tomorrow’s teachers, politicians, doctors and lawyers, among others. Recently, however, some members of the Tribe traded in their books and laptops for a new title: elves. Ten students from the College joined forces with The Ellen DeGeneres Show to help distribute more than $30,000 in gifts to the Pierce family of Hampton, Va.

Each holiday season, The Ellen DeGeneres Show puts on a program titled “12 Days of Giveaways,” where DeGeneres gives away 12 prizes to members of the studio audience throughout the month of December. At the end of the program, the show picks a family that they think is deserving of all of the gifts and surprises them with the 12 presents and a visit from members of the show’s cast and crew. This year’s chosen family, the Pierce family, includes Dominique Pierce, her husband Jonathan, and their four young children, all under the age of five.

“The family has gone through a lot of things,” Sidney Brooks ’15, who was involved as an elf, said. “Both the mom and dad are social workers; they have four kids. They had a hard time during the holidays and they were all sick as well.”

In need of some help, the show’s associate producer contacted the Office of University Relations at the College and asked if any students would be available to help deliver the gifts for the show. While many students had already left for the winter holidays, several remained and volunteered to help distribute the surprise gifts to the family. Students who were interested filled out an application with their name, major and class year, and submitted photos of themselves for consideration to the show. Of those who applied, 10 students were chosen. The segment was shot Jan. 3, and it aired Jan. 7.

“I was over the moon [when I found out],” Candace Garnes ’13, a participant in the surprise, said. “I’ve been watching Ellen probably for like eight or nine years now, so I was really excited.”

Upon learning of their selection, the students met up Jan. 3 at 5 p.m. at the Embassy Suites Hotel in Hampton to get started. After receiving Ellen sweatshirts and Santa hats to wear during the surprise, students met with the show’s on-air correspondent, Jeannie Klisiewicz, to begin shooting.

Students helped to load the gifts into a van and then piled in to wait outside the Pierces’ apartment while Klisiewicz knocked on their front door. DeGeneres then called the family while Klisiewicz and the students prepared to enter the apartment for the surprise. They spent over seven hours capturing scenes that showed the students packing up the van with a multitude of gifts, waiting outside for their signal and surprising the family.

“We staked out for an hour or so in front of their apartment, off to the side,” Brooks said. “Then they did something where Ellen called them and talked to them while Jeannie was at the door in place ready to go in, and then from there we just piled in all the gifts — $30,000 worth.”

On DeGeneres’ cue, Klisiewicz knocked and entered, taking the family completely by surprise. The group of elves entered their apartment one by one as DeGeneres spoke with Dominique Pierce on the phone about what the Pierces were about to receive. The family gasped in awe and sat shocked as the students piled gifts — including a 42-inch television, gift cards ranging from $200 to $2,000, a range of electronics and a trip to Jamaica — at their feet.

“It was exciting seeing the family’s faces and how surprised they were,” Emily Correal ’13, another participant, said. “It was definitely one of the most rewarding things I have ever done. Even though I wasn’t the one personally paying for the gifts, it still felt like we were helping out. Seeing the joy, especially on the little kids’ faces, was so great.”

Although the students did not get to meet DeGeneres, they still took away a great deal from the experience.

“I think it was a really great experience,” Brooks said. “Just to see something really special like that, and seeing people helping — that meant a lot for me to be a part of that and watch it happen and just to see that you can be rewarded for doing good things.”

Students also noted the importance of giving back to the community, which they experienced through their work with the show.

“Always remember to give back,” Garnes said. “Even if it is a way that is small, always just try to find some way to contribute and give back.”