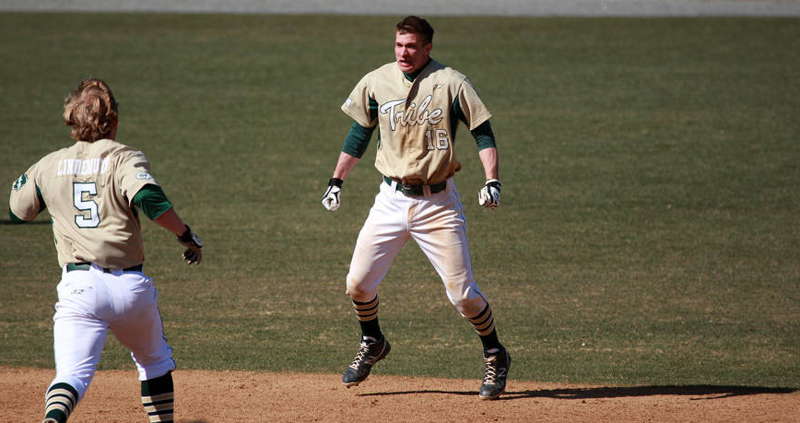 While most of the student body tanned or napped spring break away, William and Mary baseball (10-5) capped off a busy week, taking two of three from Rutgers (3-9) at Plumeri Park.

The Tribe’s series against Rutgers marks the best start to a season for the College in five years. As pitching coach last year, now head coach Jamie Pinzino led the pitching staff to a 3.06 ERA. Pinzino’s impact on the pitching staff carried over to this year, with the rotation turning in a 3.98 ERA so far this season. Due to the Scarlet Knights’ talented hurlers, Pinzino’s pitchers’ performances were pivotal to the team’s series win.

Starting senior pitchers Brett Koehler (2-1) and John Farrell (3-0), alongside sophomore Jason Inghram (1-2), got the Tribe going in the right direction. In their respective starts, each gave up just two earned runs through at least six innings of work.

However, the form of the College’s pitching staff was not limited to the starting pitchers. Junior relief pitcher John Sheehan (1-1) and freshman relief pitcher Mitchell Aker (1-0) came on strong in late innings to earn their first wins of the season Friday and Sunday, respectively.

Saturday’s loss was the exception. As the game went into extra innings, Sheehan gave up two runs in the top of the tenth, allowing the Scarlet Knights to equalize the series with a 5-3 win before Sunday’s rubber match.

Freshman pinch-hitter and offensive catalyst Jonathan Sarty, while only having 6 at-bats all season, served as a prime factor in each of the Tribe’s wins against Rutgers. Sarty, pinch-hitting for senior outfielder Derek Lowe, came on in the eighth inning of Friday’s game and drove in the decisive run with a single to center field.

On Sunday, Sarty entered in the ninth inning for Lowe again and notched another hit that brought in senior infielder Ryan Williams from second base to tie the game. Then, senior infielder Kevin Nutter swatted the ball to left field, giving Sarty time to make it to the plate  and end the game.

Both teams’ pitching staffs kept Friday’s game close, as they did in each game of the series. The Tribe’s two-run outburst against Rutgers relief pitcher Rob Corsi (0-3) in the eighth inning proved to be the deciding factor in the College’s 4-3 win. Aker earned his third save of the season and the Tribe win by retiring each Scarlet Knights batter in the top of the ninth inning.

Saturday’s matchup went the opposite way for the Tribe, with the Scarlet Knights claiming a decisive two-run advantage in the tenth inning. However, the Tribe came back from a one-run deficit with two outs in the ninth inning to keep the game close. Sarty, in yet another pinch-hit situation, smacked a single through the left side of the infield to give freshman catcher Ryan Hissey, who was on third, an easy run to tie the game and force extra innings.

In the top of the tenth inning, Sheehan, having thrown one and a third innings of scoreless baseball, loaded the bases with one out before Pinzino pulled him in favor of Mitchell. After recording the second out on a fielder’s choice, Mitchell walked in the go-ahead run and gave up another run to put the Tribe offense in another do-or-die hole. But, the College couldn’t rally, and the game ended with a 5-3 loss.

In Sunday’s game, the College used yet another two-run outburst in a late inning to break through a 3-2 deficit, scoring two runs in the bottom of the ninth to steal the game and the series. After Sarty’s game-tying RBI single, Nutter belted Rutgers pitcher Nathaniel Roe’s fastball into wide-open space in the outfield, creating just enough time for Sarty to sprint around the bases and slide to the plate before being mobbed by his teammates.

The Tribe will host Liberty tonight.