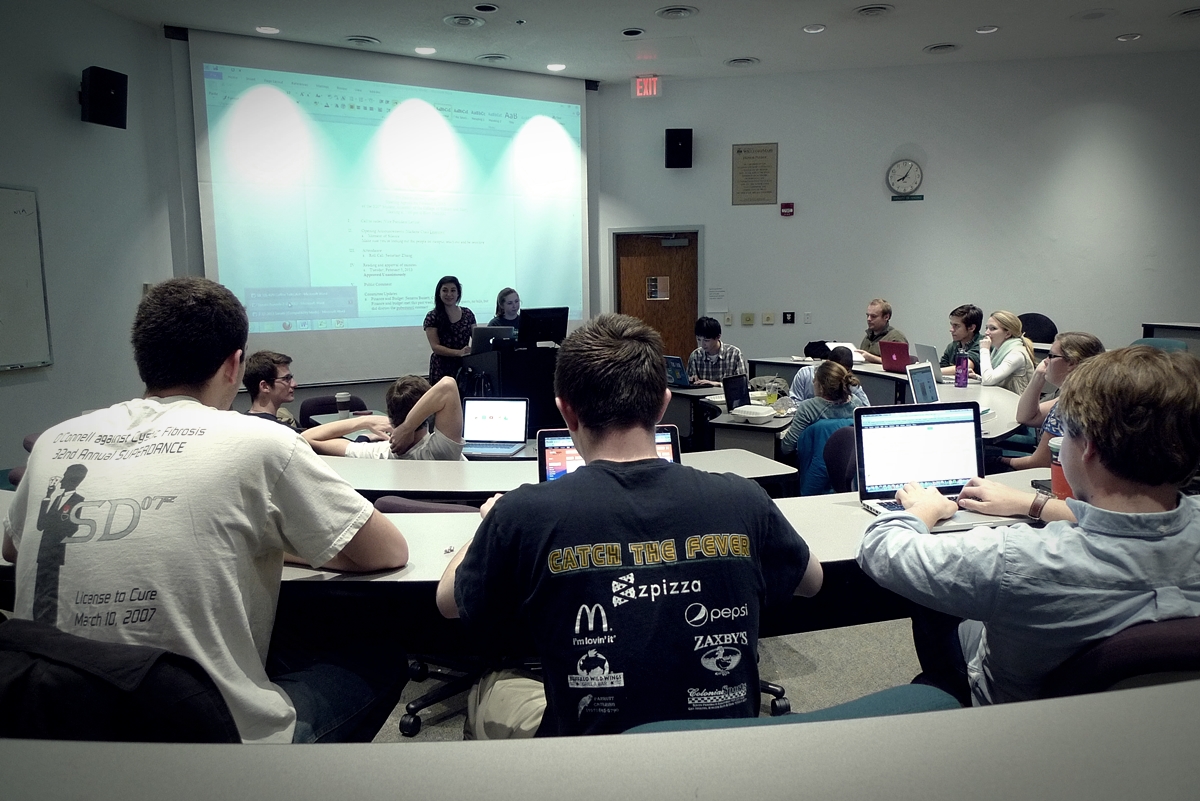 The Student Assembly senate passed the Code Revisions Begin Act, discussed attendance issues and spoke on a number of ongoing programs, in their last meeting before spring break Tuesday, Feb. 26.

“Basically, the historian will be someone that the senate would have to elect, either within senate or out of senate—it could be a regular student,” Madame Chair Kendall Lorenzen ’15 said. “They will be charged with keeping records of everything that happens within the senate and making sure those records are added to the archives at [Earl Gregg] Swem [Library]. The CTO, or archivist, is charged with making sure that electronic versions are available to all students.”

After passing the bill, the senate changed the SA constitution to replace the title “archivist” with “CTO.”

According to the Virginia Open Meetings Act, notice of all public meetings—including the senate meetings each week­—must be posted at least 48 hours in advance. The CTO will, among other duties, be charged with posting meeting times on the SA website.

The Joint Facilitation Committee has always been included in the SA code, but was not enforced in recent years. The committee, as outlined by the act, will be comprised of three executive members, three senators and two members of the undergraduate council. The committee will direct the CTO and organize all meeting times among other duties.

To continue their review of the SA code, the SA Code Revision Committee will meet Tuesday, March 12 after the 7:00 p.m. senate meeting. Two executive representatives, four senators and four members of the undergraduate council will discuss the potential merge of the undergraduate council and the senate in a separate meeting Wednesday, March 13 at 5 p.m. Both are open to the public.

“I feel like meeting after meeting, a half a dozen people are missing,” Ackerman said. “I was told that whether or not you’re excused, you’re limited to three.”

Secretary Jimmy Zhang ’15 will continue to excuse people, but after three absences, senators must stand in front of the senate to explain their reasons for missing meetings as outlined by the SA code. As of now, this policy has not been enforced this year.

The executive is discussing ways the SA can get involved in Admitted Students Day with the Admissions Office. Additionally, the Executive branch is working with sexual health organizations on campus to organize a Sexperts event to inform students of sexual health opportunities.

The senate described the state of a number of ongoing programs and initiatives. SA representatives will meet with Tribe Rides coordinators to check on the state of the program’s funding, advertisements to sign up for coffee talks will be available soon, and senators are continuing to look for ways to obtain copies of The Wall Street Journal and other  periodicals for students.

“We can’t negotiate directly with the buyers so we can confirm the prices ourselves; we have to do everything through [the administration],” Sen. Ishan Bardhan ’13 said. “You know, we had our meeting two weeks ago after waiting three or four months … and now we’re waiting for them to confirm the prices they gave us and that could take—who knows. It’s pretty frustrating. It should not be this complicated.”