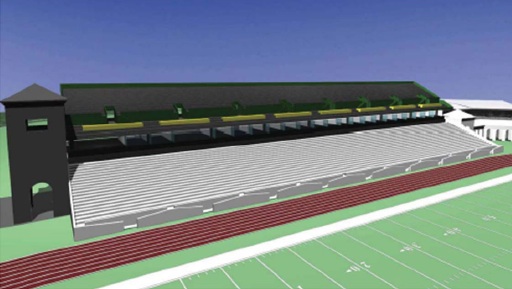 The College of William and Mary is currently in the exploratory stage of a project that would renovate and expand Zable Stadium, according to the Pre-Proposal Conference for Architect-Engineer Services.

A presentation titled “Renovation of an Addition to Zable Stadium” details the plan to construct a press box/luxury-suite level above the West stands.  The presentation also suggests adding 3,300 seats above the press box/luxury-suite level. The proposal includes plans to refurbish the current East stands press box and renovate or refurbish the entire West stands area.

No price tag on the project is mentioned, but Senior Assistant Athletic Director of Public Relations Pete Clawson said it would not be as high as the $35 million mentioned in a recent Virginia Gazette article.

“It’s no understatement to say it’s very early in this process,” Clawson said. “But it’s a strong statement that we’re moving in a positive direction on this.”

Aside from the more major additions, the project calls for the construction of an elevator and more handrails, as well as upgrading a number of stadium-wide systems, including the PA system, emergency power generation system and lightning protection system.

Director of University Relations Brian Whitson said the price would depend on the College’s ability to raise private funding for the project.

“Zable Stadium has long since passed its 70th anniversary,” Whitson wrote in an email. “Though historic and beautiful, it badly needs repairs. W&M is exploring options and costs. Decisions about what to do will hinge on the availability of private funds. No state funds may be used for athletic facilities.”

The project would piggy-back off plans already developed in a 2006 Zable Stadium Feasibility study. The project led to the construction of the Jimmye Laycock Football Center and added football practice fields to campus, which were completed in 2008.

As for a timetable, College officials say the project is in the very early stages. A schedule in the presentation lists tentative dates of March 1, 2013, for the selection of an architect and engineer, March 15 for fee negotiations, and March 22 to award the contract. It says construction should start December 2014, immediately following the completion of the football team’s 2014 season.