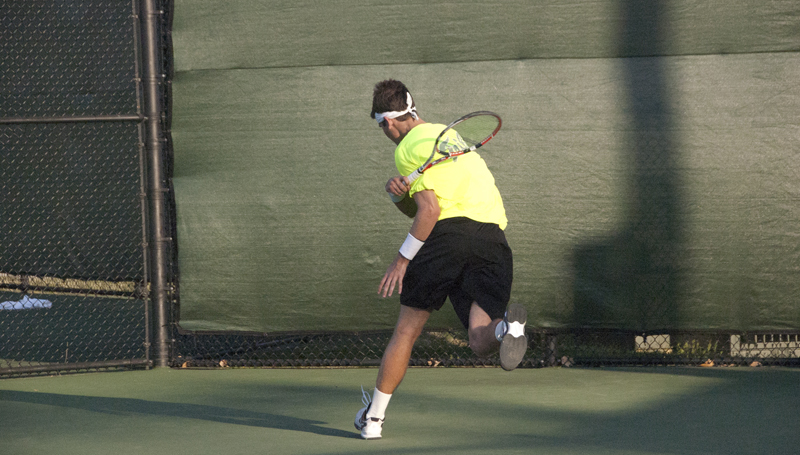 William and Mary took to the courts over the weekend in the Colonial Athletic Association championships. While the Tribe advanced to the final, it could not bring home the championship, falling 4-0 to UNCW.

With the 4-3 win over the Dukes, the Tribe was able to advance to the final. Junior John Banks clinched the championship berth with a three-set victory at the No. 5 slot.

Opening the match with wins at the top two doubles spots, the Tribe quickly established an early 1-0 lead. Junior Ben Guthrie and Banks quickly took an 8-2 decision over Greg Vladimirksy and Hugo Ramadier at the No. 2 slot. Senior Anton Andersson and sophomore Aaron Chaffee followed to clinch a victory at the No. 1 position, the duo’s 10th win in the No. 1 doubles slot.

In singles, the College continued to quickly gather points. Guthrie took the initial point of singles, posting a 6-1, 6-1 drubbing of Vladmirsky. Junior Ben Hoogland then took a 7-5, 6-1 victory in the No. 4 position against Rob Stirling. It was Hoogland’s 17th match win of the season.

Although the Dukes would win two more matches to bring the score to 3-2, Bank’s victory in the No. 5 slot eventually sealed the match. The game was Bank’s eighth straight victory, with his 21 total wins leading the team for the season.

After defeating the Dukes in the semifinal, the College was set to face UNCW in the final on Sunday.

Unfortunately, the Tribe’s streak of good play would end as the Seahawks (18-4, 3-0 CAA) quickly defeated the Tribe 4-0, reaching four match wins before all six single matches could conclude.

The squad, ranked No. 54 in the nation, quickly took the doubles point behind its strength in the top two spots. Kosta Blank and Chris Cooprider, ranked No. 28 nationally, dispatched the College’s first-team All-CAA pair Andersson and Chaffe 8-3. At the No. 2 slot, Rafael Aita and Sam Williams, ranked No. 54 nationally for the Seahawks, defeated Banks and Guthrie to the tune of an 8-1 defeat.

With an early and decisive 1-0 lead, the Seahawks went into singles and quickly captured more victories. Cooprider defeated sophomore Will Juggins 6-3, 6-1 in the No. 2 spot, giving the Seahawks a 2-0 lead.

Blank continued his good play from doubles and dispatched Hoogland 6-3, 6-1 in the No. 4 slot. Zach Hublitz almost finished simultaneously with his teammate Blank, winning a 6-3, 6-2 tilt against Freshman Scott Huang. Huang’s loss sealed the fate of the Tribe.

The lone positive for the Tribe during the final was Banks.

Despite watching most of his teammates lose in the courts near him, Bank’s determination did not wane, and he continued on pace to put the Tribe on the board.

In the No. 5 slot, Banks won his first set 6-3 and was leading his second set 4-2 against Kaue Pereira. However, the match was called off as the Seahawks had already reached their match-deciding fourth point before Banks could put the College on the board.

The loss denies the College an automatic bid to the National Collegiate Athletic Association regionals. The squad will hope for an at-large bid; otherwise, the season will end.