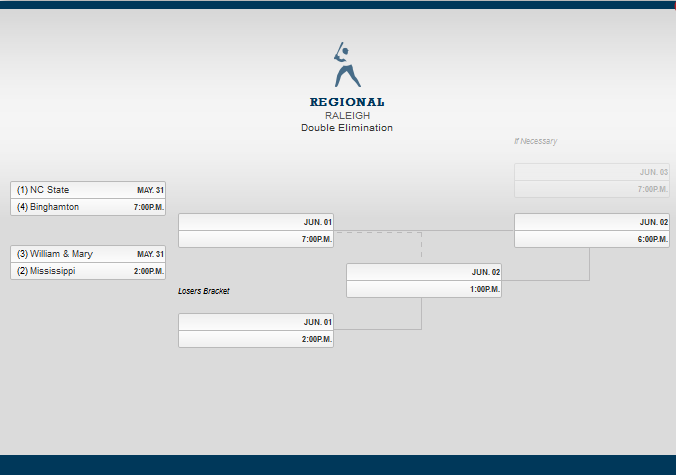 William and Mary received its first at-large bid from the National Collegiate Athletic Association in school history on Memorial Day, punching the team’s ticket to the Raleigh Regional. As the team took to Twitter, the celebratory responses were euphoric and simple. Sophomore first baseman Michael Katz may have put it best:

Never been so amped in my life! Got that at large bid!!! We dancin! Headed to the tourney!!!! #regionals #rolltribe

and the Major League Fan Cave even got involved, sending:

Time to get back to work… #TribeBall

It’s been the ability to balance celebration with a workmanlike attitude that’s helped the College (37-22, 17-10 CAA) find success. The program’s 37 wins tie the program’s all-time mark for victories set in a season, last seen in 2007. For the first time since 1938, the College had a pitcher — senior John Farrell — win 10 games, which ultimately helped the team win its first-ever at-large bid.

If it’s head coach Jamie Pinzino at the wheel of the “bus,” he doesn’t see the need to slow down or stop.

“Obviously, we are really excited to have the chance to continue our season. I am extremely proud of every player in our program; they deserve this moment as they have bought into the program since day one,” Pinzino said to TribeAthletics.com. “This is a great step for William and Mary baseball and hopefully a sign of things to come in Williamsburg for years to come.”

The program’s third trip to the NCAA Championship marks the first at-large entry, having qualified in 1983 (East Coast Athletic Conference South) and 2001 (CAA) as conference champions with automatic bids. Sophomore left-handed pitcher Jason Inghram will lead the Tribe into its first matchup against Mississippi today at 2 p.m.

While Pinzino and his staff prepare for today’s match in the Raleigh Regional, The Flat Hat sports desk recaps the road to the regional — the Colonial Athletic Association Tournament.

Key statistic: 13 players hit by a pitch, ties NCAA record for most HBP in single game

Pitching took the backseat in a game that saw a tournament-record 45 hits as the Dukes and Tribe combined for 39 runs. Ultimately, Hissey’s two-out, walk-off single in the bottom of the ninth inning sealed the win for the College.

Farrell started the game for the Tribe, giving up three runs in as many innings. An 11-run third inning, which saw the College send 18 batters to the plate, helped take pressure off of Farrell as the Tribe leapt to a 12-3 lead through three innings. With the weather worsening, officials postponed the game overnight.

The following morning, James Madison punished the College’s bullpen, scoring seven runs in the fourth inning before tying the game at 12 apiece in the fifth inning. From the fifth to the ninth inning, both teams struggled to gain an advantage over the other. With the Tribe trailing 19-16 heading into the bottom of the ninth, junior second baseman Ryan Lindemuth drove in the tying runs. Hissey stepped up to the plate, knocking a single to centerfield for the 20-19 victory.

The win also marked an NCAA record, as 13 players were hit by a pitch. Pinging batters all game, the Tribe and Tigers are now dubious owners of an odd statistic.

Although Lindemuth continued to play well at the plate, notching four hits and three runs, the College’s offense couldn’t reproduce its production from earlier in the day against James Madison. Instead, Towson plated runs in every inning except the second and seventh, outgunning the Tribe for the 20-13 win.

Freshman Mitchell Aker, sophomore JT Castner, junior John Sheehan and freshman Joseph Gaouette each saw time on the bump for the College. However, as in the James Madison game that morning, the bullpen failed to shut down the opponent’s offense. The loss set up the Tribe for an elimination game against Northeastern. A win would advance the squad to the championship, while a loss would end the season.

Needing a win, Pinzino turned to his ace, and Farrell didn’t disappoint, allowing four runs on seven hits. Perhaps most importantly, Farrell lasted six innings, allowing the bullpen some much-needed rest. After Farrell left the game, Wainman closed out the game with three innings of no-hit baseball to ensure the 12-4 win and advancement to the title game.

Offensively, the Tribe continued to pound out hits. Every field player recorded a hit en-route to more than doubling Northeastern’s hit total. Knotted up at four apiece in the sixth inning, Lindemuth’s three-run blast to right field opened up the game. The College wouldn’t look back, advancing to the CAA Championship for the first time since 2001, when it won the conference.

Senior Brett Koehler took the mound for the College, allowing just three runs on 11 hits through eight innings. Trailing 3-2 heading into the ninth inning, the Tigers scored two runs off of Wainman. The College’s offense couldn’t find a spark in the ninth, as the season ended with a second-place finish in the conference. Any hope of playing in the NCAA Championship now rested in receiving an at-large bid from the NCAA selection committee.

Follow @FlatHatSports for the latest information during the College’s post-season run in the NCAA Championship. Check back with Flathatnews.com for coverage and analysis following the Raleigh Regional.