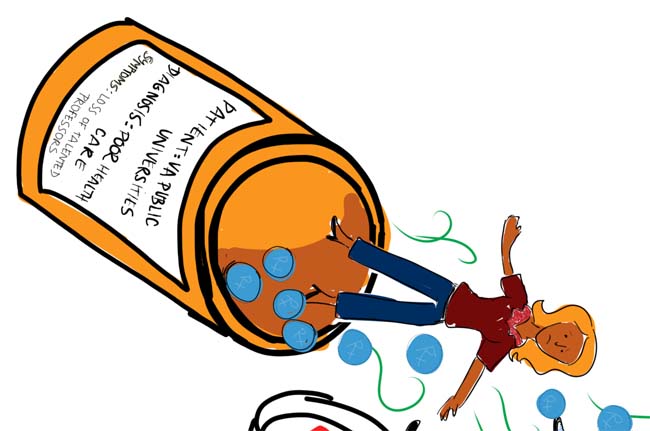 Miles behind 13 states and the District of Columbia, you refuse to acknowledge the legitimacy of same-sex marriage. When the federal government ruled gay couples must receive the same federal benefits as heterosexual couples in states recognizing gay marriage, you gleefully toasted that you do not, in fact, recognize gay marriage.

You cling to an antiquated set of political beliefs. You throw around words like “progressive,” but you trot out outspoken anti-gay rights Attorney General Ken Cuccinelli II, R-Va., like a prize sheep at one of your county fairs. You talk business and growth, and yet you use policies that encourage employees to flee from you.

Where do you draw the line, Virginia?

But, Virginia, when you refuse to offer health benefits to domestic partners of state employees, you openly discriminate against your population. You deny your people a right because of sexual orientation. You discriminate.

Explain how this is good business, Virginia.

With your neighbors offering federal domestic partner benefits to academics in same-sex partnerships and marriages, you offer nothing. Why should gay faculty and staff, struggling to find benefits for their partners, stay?

If you want to remain as one of the handful of states offering top-notch higher education, go back to the basics. Your policies drive away faculty and staff, the same faculty and staff that maintain your academic reputation and bring thousands of students to your borders.

Students attend your universities to receive a quality education and are willing to pay. Lose your faculty and staff, lose your students, and lose your money. You might not see this as a problem, Virginia, but your constituents do.

Former Rector of the Board of Visitors of the College of William and Mary Jeffrey Trammell ’73 lays it out for you. It’s simple:

“The best business practice, the best way to run the university today, is to extend same-sex health benefits,” Trammell said.

Change your policy and you will save your universities.

Under current policies, you undervalue your colleges. You, in the words of Trammell, harm your graduates’ chances of landing a job in businesses that value a good education. You’re hurting yourself.

As gay faculty and staff leave your borders, your colleges and universities weaken. Your graduates, as a result, weaken. You will produce class after class of students unprepared to compete in the global economy, beaten out of jobs by students whom your former faculty and staff taught in another state.

How many faculty and staff will flee your borders before you take action?

Without coverage for domestic partners, gay and lesbian faculty and staff are taking their intellect, skill and most importantly, their grants to other states or private companies that offer benefits. You face a serious problem — a “brain drain of gay academics,” to echo the Washington Post.

You did nothing, Virginia, after Governor Robert McDonnell, R-Va., came into office. On the surface, the issue seems deeply political. The Republican tag-team of McDonnell and Cuccinelli avoided the issue.

Peel back the layer of the problem, and you’ll see not extending domestic benefits isn’t just a political question. It’s an economic concern, a social concern and a problem for your state’s universities and colleges.

Poor business has no room on the state level. Get on track, Virginia, before the George Masons and the Virginia Techs and the William and Marys of your state lose all hope of equality in the academic world. You think you have a problem funding public education now — wait and see what monster you’ll create by withholding domestic benefits for an issue as mundane as sexual orientation.

Discrimination isn’t a word to be thrown around lightly. You’ve faced this charge before, 50 some odd years ago. Shockingly, or maybe not shockingly, you did nothing then. You’ve had a Civil War on your front porch. Change your policy before another type of civil war starts, in the courtroom, in the media and on your college campuses.

Since you move slowly and in small steps, Virginia, follow the precedent for extending benefits and avoid legalizing gay marriage. The University of Missouri recently enacted a more inclusive benefits package. They’re not sinking or falling apart as a result.

You watch your so-called ‘valued’ gay academics pack up and leave, headed for the greener pastures of your rival states.

You turn a blind eye to gay faculty and staff struggling to support their partners not covered by the state benefits system. You remain blind even when those faculty and staff leave the state, packing millions in grants with them.

You refuse to extend federal benefits because you don’t recognize gay marriage, even as you lose money and the value of your state institutions.

The solution is easy. Asking you to realize the solution is tough, but possible. Follow precedent and extend benefits to partners of gay and lesbian faculty and staff. You’ll retain your high quality academics and benefit from a more progressive society.