Home Variety Dancing with the Devil 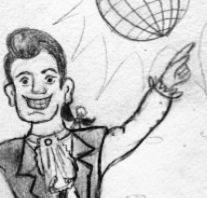 If the devil challenged you to a dance-off, would you accept?

An early 17th-century Virginian legend sought to explain the name of Dances Point, a strip of land extending into the Chickahominy River near the James River. Colonist Philip Lightfoot was surveying the land one day when he met the Devil himself, who claimed the land for himself — or so the story goes.

Unperturbed, Lightfoot offered to sell Satan the property but refused to relinquish his claim. Sensing Lightfoot’s vanity, the Devil proposed an interesting wager: a dance contest for Virginia.

“Lightfoot declared himself to be the best dancer in all of Virginia,” Colonial Williamsburg Foundation Research Historian and Associate of the Omohundro Institute for Early American History and Culture Dr. Taylor Stoermer said. “The devil said, ‘Well it’s on. We’ll have a dance-off.’”

Early colonists used this story to explain why a certain spot of land at Dances Point remains forever clear of trees and vegetation.

The Faustian danse macabre ends happily for Lightfoot. Impressed by his adversary’s moves, the Devil declared himself beaten and immediately withdrew his claim on the property.

To read more spooky stories, dance your way on over to our series of ghostly features.