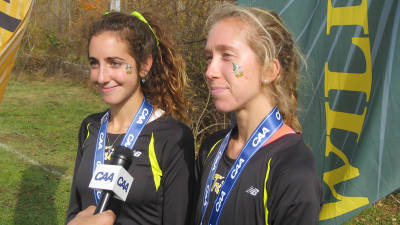 The ten-second gap between sophomore Emily Stites and the rest of the field at the Southeast Region Championships secured Stites’ place in William and Mary history in more ways than one.

Stites’ 19 minute, 57 second 6,000-meter run marked the first individual regional win in the women’s program history, while  also helping  the College secure a No. 2 finish, ensuring the Tribe would return to the National Collegiate Athletic Association Championships for the second consecutive year — another first in school history.

“When I finished the race, I thought ‘Did that really just happen?’ I had no intention going into the race of breaking a record or anything,” Stites said. “It was just a ‘go from point A to point B as fast as you can’ kind of thing. When I found out afterwards … that I had broken the record …  I was just like, ‘Oh, that’s just a cherry on top.’ It’s a nice surprise when you hear that.”

Stites’ time bettered that of Olympian and former Villanova runner Sheila Reid, who posted a 20:13 mark in 2009. Overall, the women’s program finished behind meet-favorite No. 11 Virginia by just 12 points.

“The women ran great. They came on really strong at the end. They gave U.Va. a challenge — it was on their course, they were the favorites,” Director of cross-country Stephen Walsh said. “I wouldn’t consider it a loss. I think we put some fear in them coming into nationals.”

Senior Elaina Balouris, stride for stride with Stites at the beginning of the race, finished sixth overall with a time of 20:12. Balouris finished half a second out from the top-5 runners. Sophomore Meghan McGovern and senior Michelle Britto rounded out the top-25 finishers, crossing the line 12th and 17th, respectively.

“We knew she was capable of doing that. [Balouris] ran a strong race; she pushed the pace a little bit too early,” Walsh said. “The one-two punch we have there, at the next level, is going to be very impressive.”

On the men’s side, senior Joshua Mercado paced the College with a 29:57 10,000-meter run, good for 29th overall. As a team, the Tribe finished sixth, upsetting three higher-ranked teams.

“The guys improved a lot, and we finished a lot higher than our ranking. That was huge,” Walsh said. “I think we had some very good performances with a very young team.”

The men’s program heads for the Intercollegiate Association of Amateur Athletes of America in New York, N.Y., Nov. 23. Stites will lead the women’s program to the NCAA Championships in Terre Haute, Ind. Nov. 23.

“Obviously, only being a sophomore, qualifying for nationals is a great tradition to establish,” Stites said. “I’m really excited for all the years to come.”

For Stites, the challenge entering the NCAA Championship is two-fold. As conditioning won’t add much value so late in the season, the emphasis shifts to shorter runs to ensure fresh legs. Mentally, however, the trick is to keep the meet in perspective.

“Mentally, I think it’s just to remember that this is the most fun meet of the season,” Stites said. “We’ve put in all the hard work, and this is where it gets to pay off.”

Waiting to confirm, but hearing Stites not only won meet, but also set course record. Standout sophomore adds another win to resume. @wmxctf

Stites lead the way (finished No. 1) as No. 19 @wmxctf advances to second @NCAA Championships in as many years. 12 points shy of No. 11 UVa.