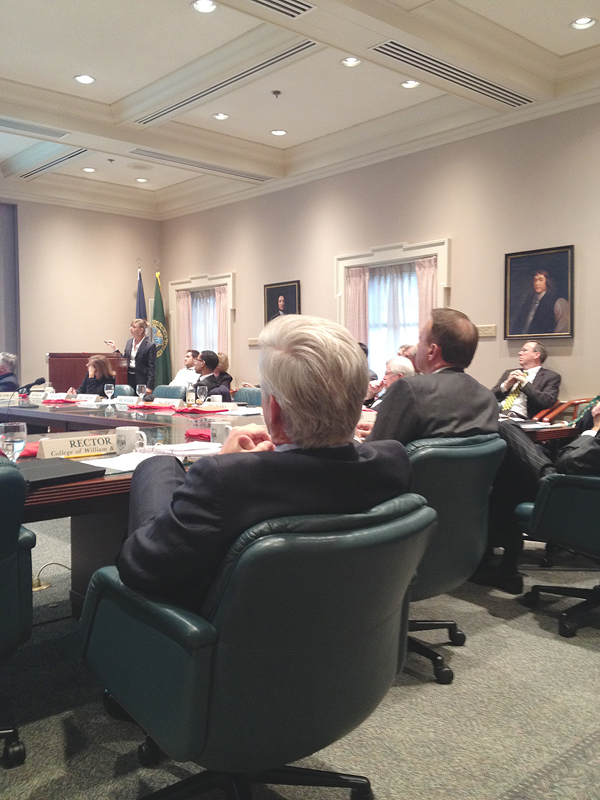 Friday’s early morning Board of Visitors meeting on strategic initiatives and new ventures discussed the College of William and Mary Promise and its implementation, a new business innovation project and early admission indications concerning the pool of applicants for the class of 2017.

The proposed business innovation includes a “blitz diagnostic” beginning in fall 2013 which will spend eight to 10 weeks determining and working on areas in the current business model which have the greatest promise in generating revenue. One proposed initiative includes promoting the William and Mary brand with new college apparel and products.

In January, Julie Summs ’92 will be hired as Director of Economic Development and Business Innovation to help lead the effort.

“This position is a catalyst that tries to stimulate activity around the university and the resources that we have … I think she’s going to do a great job and we’re delighted,” Vice President for Strategic Initiatives James Golden said.

The review process for the diagnostic initiative will happen in March 2014, approving areas with the most promise by April.

“The point of all of this is to use all of our resources to their optimal level … This is a multi-year, multi-prong exercise … We want our operations to reflect the quality of our academic excellence,” Provost Michael Halleran said.

Henry Broaddus, dean of admission and associate provost for enrollment, also updated the committee on admissions statistics for the class of 2017.

Broaddus said the regular-decision wave of applicant will show how Virginia families are responding to the William and Mary Promise.

“The real test of the William and Mary Promise … is going to be about yield this year,” Broaddus said. “Early decision can tell us something and certainly right now it can say it did not hurt us in-state in the early decision round and I think that’s very good news.”