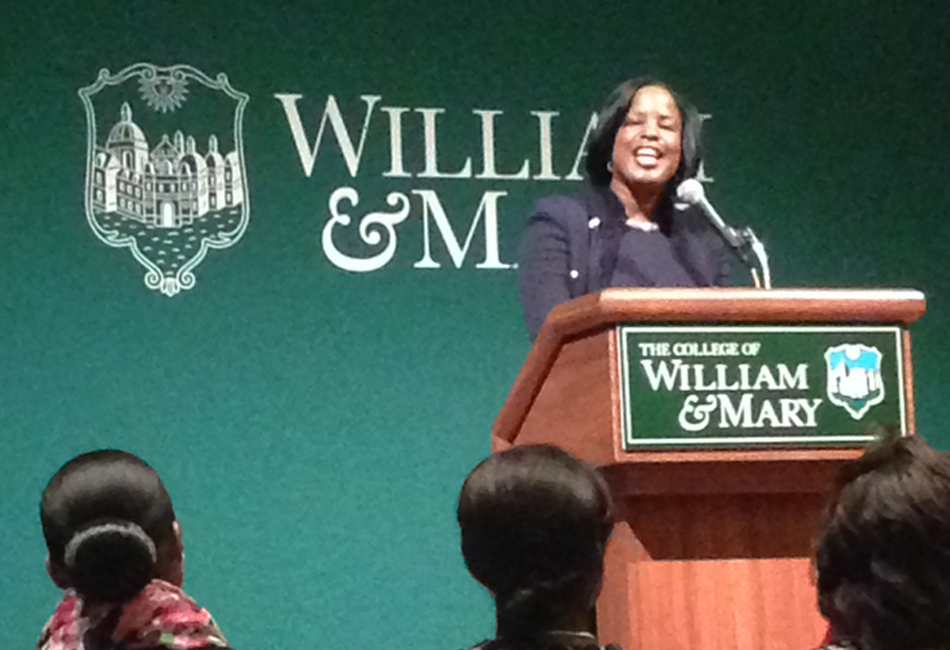 Dr. Martin Luther King, Jr. is one of just three Americans to have a national holiday named in his honor, Roslyn Brock, chairman of the National Board of Directors for the NAACP, said during her presentation commemorating King at the College of William and Mary.

“It is an honor that is bestowed upon a man of African descent to have the nation pause to honor him,” Brock said.

Brock’s speech was part of the Center for Student Diversity’s Annual Dr. Martin Luther King, Jr. Commemoration Program Thursday, Jan. 23. A supporter of rights for the individual and for the underserved, Brock focused her presentation more on social inequalities than on racial ones.

She especially emphasized the individual’s obligation to participate actively in society — specifically, to vote in every election and to respect others. Citing King, she criticized those who stay silent during times of social change.

For Felicia Bowins ’16, who attended the talk, Brock’s emphasis on the value of the individual is what stuck out the most.

“I liked what she said about how we need to see everyone because everyone matters, and in our society that is often forgotten,” Bowins said.

Referencing problems such as gun violence, homelessness, poverty, healthcare disparities, illiteracy, unemployment and racial profiling, Brock demonstrated to the audience that even though 50 years have passed since King made his famous “I Have a Dream” speech, the race-blind society he spoke of has yet to be achieved. She alluded to the 2012 shooting of Trayvon Martin as an example of the violence that persists today.

However, she balanced her statement by reminding the audience that inequality affects everyone, and that blacks in the United States are not the only ones who suffer. Furthermore, Brock stated that the new generation is actually less aware of race than the previous one, although this may have both positive and negative implications.

“Many of the new generations — they don’t have a problem with the race issue,” Brock said. “It’s some of us older folks who are still living and fighting old wars. I say that with a slight pin I have to put in it, because they may not see race because they don’t understand the phenomenon that created it. And so there needs to be an understanding and an awareness, but not a crutch that one wears on their shoulder as a badge of honor or a sense of victimization.”

Assistant Director for the Center of Student Diversity Margie Cook said she sees the role of race at the College on a regular basis. She agreed that while students may be becoming less aware of race, they are losing sight of the problems racial minorities continue to face.

“That’s a thing I think not everyone on campus necessarily understands — all of the context and all of the forces that impact people based on their race,” Cook said. “Even if they themselves are completely accepting or don’t have a prejudiced attitude, they may not understand what people of a certain racial identity are facing on a daily basis.”

In her answer to a question posed by an audience member about fair representation of both black and white history, Brock delivered her final message of the evening. She asserted the importance of affirming one’s personal history, regardless of the controversy that may surround it.

“The history of Virginia, with its slave and slave owners, is one that I think is a paradox; one that some would want to glorify — the days of the civil war and slavery — and [for] others, it’s a very painful experience,” Brock said. “Are you right because you are the slave owner or am I right because I am the slave? No, it is our common history that has produced and brought us to this place and it is that history that we have to honor as human beings in a society.”