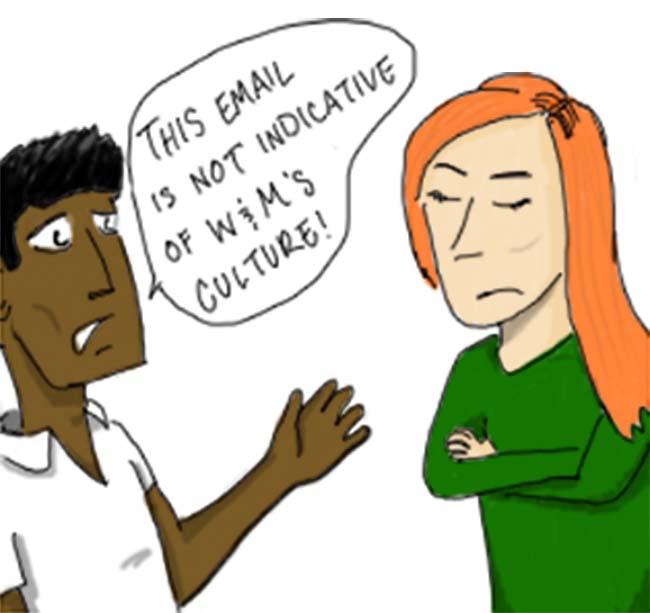 We’ve all read it. We’ve all seen the outraged statuses, blog posts and articles it provoked. Should the Sigma Chi email have been written? No. Is the community’s anger and insult legitimate? Yes. Does the email indicate that the College of William and Mary has an out-of-control rape culture? Absolutely not.

I could argue that it was only a joke — a very crude one; that men are also often sexually objectified by women; that if you actually read the email, there is nothing in it about forcing nonconsensual sex on a woman; that this email only indicates that 20-year-old men constantly think about sex and enjoy telling lewd jokes. But I won’t. I’m tired of arguing about this.

Instead, I would like to pose some questions to the College community, which, I should say, is the most accepting and respectful community I’ve ever encountered. My goal is to soften the rhetoric of a debate that has unjustifiably and unnecessarily consumed our campus. I’m sure this will elicit criticism from strangers and friends — even my girlfriend asked me not to publicly comment on the issue. However, this is how I feel, and I’m not ashamed of it.

What if a woman had written an email about her “Save the Penises” campaign? How would everyone’s reactions differ? My guess: People still would have found it bizarre, but also clever and funny. It would be forgotten in a day.

Why are we having this discussion about rape culture and misogyny now, rather than after a fellow student was raped in December? Are we only talking about this because of the high publicity and widespread social media attention that the email attracted?

How would this Sigma Chi member be treated if his name were released? Based on the intensity of many reactions, I legitimately would be afraid for his safety. He would surely feel enough condemnation and visceral hate to permanently leave the College. Are you willing to ostracize someone over this email? Do you think he already feels intense remorse for his actions?

How does the reaction to this email impact the protection of free speech? Is it important that the day this email was leaked, the cover article of The Flat Hat celebrated the College’s ranking among the best American universities for free-speech protection? If the author’s name were released, would the administration feel compelled to expel him to satisfy this bloodthirsty student body? Over something he wrote as a joke, probably drunk?

Please do not misinterpret me: I am strongly opposed to violence against women. Rape, of anybody, regardless of sex, is an awful thing. We as a society need to do more to prevent rape from occurring, especially changing our own individual perception of the opposite sex. But does this email encourage rape or indicate that the College, particularly the fraternity community, has a rape culture and is deeply misogynistic? No. So please, resist the urge to hyperbolize the situation.