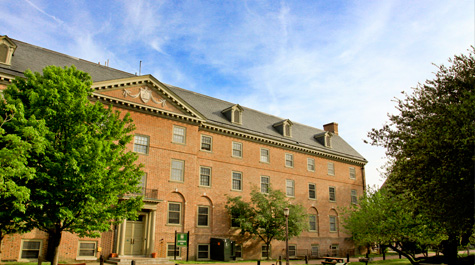 When students learned that Jefferson Hall custodian Shelly Givens was unable to continue working in the building due to an injury, they started a fundraising effort to remind other students of the wider College of William and Mary community.

“For New Years, I just texted Shelly out of the blue and just said, ‘Happy New Year! Hope everything’s going well,’” Kendall Lorenzen ’15, a resident assistant in Jefferson Hall for the 2012-13 academic year, said. “Then she texted me back and [she] let me know some of the things that had been happening. … She told me that she had been injured right before the start of the semester in Jefferson Hall, [that] she fell down some stairs and injured her leg and had been on bed rest for the rest of the semester.”

After speaking to Givens, Lorenzen learned that Givens had to move out of her home and was now living with her mother. Since the incident, Lorenzen said Givens has returned to her work in Jefferson Hall, but could still use financial aid to recover from her semester away from the College.

“She’s such an active part of Jefferson and to William and Mary in general and it just made me really sad to see any member of the Tribe suffer,” Lorenzen said.

After contacting last year’s Jefferson Hall Council President Seth Opoku-Yeboah ’16, Lorenzen said the pair began a campaign to raise money and show support for Givens. Through hall council visits, tabling at the Sadler Center and Facebook and email campaigns, the group has raised over $700 as of Monday.

“The employees — they mean a lot, they care about us. Even within Sadler or the Caf, these people are the nicest people you meet in College,” Opoku-Yeboah said. “I don’t think we should overlook them. … I think it’s good that we have these relationships so when they’re in trouble we can help them out because we do have these resources. We can do a lot of things; it’s just a matter of knowing.”

Alongside the financial support, Lorenzen and Opoku-Yeboah are encouraging students to make Givens cards.

“We thought that it was really important to show her that we supported her in a lot of different ways rather than just financially. … I think that really the important thing is that she knows that we care and that we stand behind her,” Lorenzen said.

Although Givens knows about the support campaign, Lorenzen and Opoku-Yeboah have yet to reveal the total amount raised in support for her.

“I am so thankful for the love and support of the students here at the college,” Givens said in an email.

The pair plans to present Givens with the cards and funds soon, potentially at the upcoming ice cream social event put on by the Jefferson and Barrett hall council on March 12.