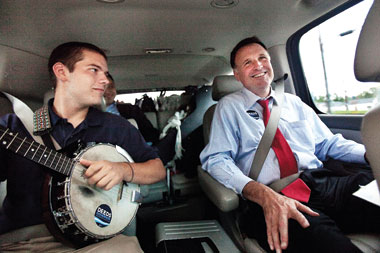 Director of the Behavioral Health and Developmental Services Division of the State Inspector General’s Office G. Douglas Bevelacqua has resigned his position amidst the investigation into Austin “Gus” Deeds’ November suicide.

In his resignation letter to Virginia Governor Terry McAuliffe, D-Va., Bevelacqua claimed that his report on the Deeds investigation had been censored, citing the removal of certain comments deemed too emotional. Furthermore, Bevelacqua claimed the release of the report was considerably delayed due to the Virginia State Police’s ongoing investigation into possible criminal activity.

“If I were responsible for publishing this report, it would have been issued weeks ago and it would have contained conclusions that were removed because they were considered speculative or too emotional,” Bevelacqua wrote in his resignation letter.

Woodbridge Professor of Law Michael Green said that working within Virginia law without spoiling a criminal investigation can be a fine line to navigate.

“It seems like it’s an area of discretion, because we’re not talking about refusing to turn over this document; we’re talking about delaying it,” Green said.

Among the concerns Bevelacqua cited in his letter of resignation was the lack of action from the Department of Behavioral Health and Developmental Services in response to a 2012 report Bevelacqua filed that made recommendations on improving the mental health services in  the state of Virginia.

“Had the DBHDS taken timely actions on these 2012 recommendations, it most likely would have produced a different outcome on November 18, 2013,” Bevelacqua wrote, referencing the Deeds tragedy.

“It seems that with some findings in the report … there were opportunities; there were open beds in at least two hospitals,” Griffin said. “There is the need for both more oversight of those who work in mental health services in the state, and for legislation that closes loopholes or that reinforces existing systems.”

As part of his 2012 report, Bevelacqua recommended the creation of a real-time registry that could substantially reduce the time required to find a bed for a patient in need. The registry was not yet operational in November, when it could have aided Gus Deeds, but it has since gone live.

Hours before his death, Gus had been released from emergency custody after the local Community Services Board could not find an available psychiatric bed in the area within the time period of six hours.

“The reality is beds will always be an issue,” Mental Health Services Coordinator for the College of William and Mary Christine Ferguson said in an email. “Most states have cut back on funding for state hospitals, and inpatient treatment is expensive.”

Ferguson described her experience in other states where there are resources in place to avoid hospitalizations, such as in-home and partial hospitalization programs for children and adolescents. These programs would allow clients to meet with providers on a regular basis for several months.

“I think [the registry is] a good start but it’s not going to solve the larger problem of chronic mental illness,” Ferguson said. “Inpatient is really the last course of action in treatment. It … is mainly utilized when immediate safety is a concern.”

The bill, whose proposal was approved Feb. 10, makes it so authorities can detain a mentally ill individual for up to 24 hours in emergency custody until a psychiatric bed can be found, extending the previous limit by 18 hours.