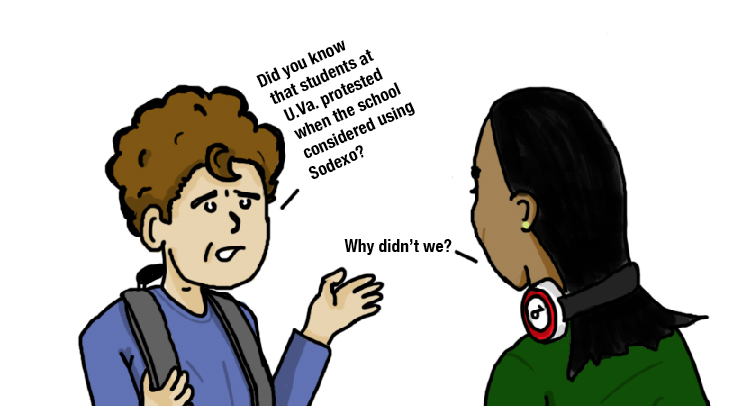 Last year, the College of William and Mary awarded Sodexo USA a ten-year contract. The Dining Services Committee made this decision while students at other colleges were protesting the corporation due to controversial labor designation changes.

After the Affordable Care Act stipulated that employers would need to provide health benefits to full-time workers who worked 30 hours a week, Sodexo reclassified its full-time worker status to an average of 30 hours a week over a 52-week period. Essentially, this change would allow Sodexo to deny health benefits to thousands of employees, previously considered full-time, who worked in dining halls that close for summer and winter breaks.

In the documents we obtained relating to the decision, no one mentioned the controversy. Also, the Dining Services Committee began considering options six months before Anna B. Martin announced the College intended to give Sodexo the contract. Where was the student input? Where was the opportunity for lively, passionate debate over worker fairness? The only student serving on the Dining Services Committee was current Student Assembly President Colin Danly ’15, and as far as we know, he was the only student involved in the process of awarding the contract. The Dining Services Committee should have included more students in the selection process and provided public forums for students and administrators to discuss dining proposals.

A dining contract isn’t just a business decision — it affects the livelihoods of hundreds of dedicated workers who serve us every day. Since the College requires every campus-residing student to be on the meal plan, any changes to dining services affect us all.

But the members of the administration aren’t the only ones at fault in the Sodexo selection process. One month after Martin emailed students about the intent to award the College’s contract to Sodexo, students at U.Va. involved in the Living Wages group on campus rose up in protest against the possibility of Sodexo at their campus. These protests occurred before the university even announced its new dining vendor — and later, the chief executive officer would state that Sodexo never provided a proposal and was not in consideration.

So how is it that a month earlier, when the College announced Sodexo would be our new dining vendor, the decision was met with near silence? Where were the protestors defending the dining service workers we care about and interact with every day?

Students should direct their passion for fairness toward campus dining. It’s worrisome that we did not show widespread skepticism earlier in the process. Students are at fault because they did not respond to the change, and we are at fault because we did not report on protests occurring at other universities. Though Sodexo has since reversed its controversial policy, the silence on campus following the original announcement is disconcerting.

But there are more questions regarding the selection of Sodexo, and The Flat Hat attempted to use documents we obtained through the FOIA to discover specifically why Sodexo was chosen. While the documents provide data related to each potential vendor, including our previous vendor, Aramark, they do not provide information on the College’s reasoning behind its decision. When we asked members of the administration to explain the reasons behind the decision, they gave only evasive answers.

The documents we obtained suggest that Sodexo was the most cost-effective option. Three of the seven Dining Service Committee members gave it a 30/30 aggregate score for cost effectiveness, which the committee used to make its decision.

Did Sodexo’s full-time reclassification make it the most cost-effective option? That remains unclear, and we will probably never know. Sodexo’s controversial reclassification policies were revised in June shortly after the College signed its contract with the dining provider. The Dining Services Committee needs to explain to students why it awarded Sodexo the contract. Further, students should demand greater involvement in deciding future contracts. Too many people are affected by these decisions to accept such a blatant lack of transparency.