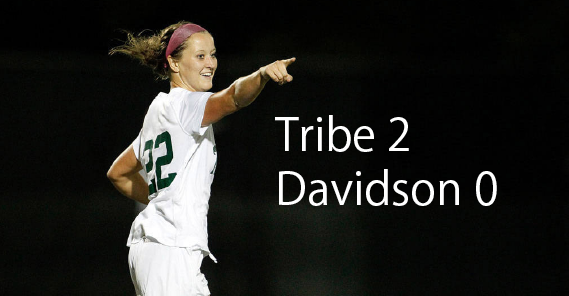 William and Mary head coach John Daly thought facing Davidson in Davidson, N.C. would be a challenge for the Tribe. His team made its 2-0 win look easy Thursday night.

“At home, [Davidson] going to be tough” Daly said in an interview prior to matchup. “They’re a good side and we need to be ready to play.”

The College (5-1-1) rose to the occasion in a dominating performance over the Wildcats (3-5-1), showering Davidson’s keeper with 20 total shots. The Tribe also fired 10 shots on goal in an outstanding offensive performance.

The Wildcats’ offense faltered under the College’s defensive pressure, only posting three shots in the entire contest. However, even that doesn’t tell the full story of the Tribe’s superior defensive play: not a single Davidson shot was on frame, sealing junior goalkeeper Caroline Casey’s third shutout of the season. Casey has shut out opponents in the last 205 minutes of play.

Not having scored since Sept. 7, the Wildcats opened the game determined to score with a pair of early shots, but the Tribe seized momentum soon after. In the 34th minute, freshman back Elysse Branton crossed the ball over to senior forward Emory Camper, who placed her shot in the left corner for the 1-0 lead. On the play, Camper tallied her second goal of the season, while Branton recorded her first point in her collegiate career.

Junior forward Samantha Cordum nearly scored late in the first half after breaking free for a shot, but the Wildcats’ keeper made the save. However, Cordum was not to be denied again in the 54th minute when she received a pass from freshman midfielder Rachel Moore. Cordum sent the ball to the far post on a shot from inside the box, pushing the College ahead to a 2-0 advantage. Davidson had no answer for the outstanding forward, as Cordum finished the game with six shots, 5 of which were on goal.

The Wildcats were fortunate to keep the Tribe’s lead at 2-0, as Cordum fired off another on-target shot shortly after her goal. Freshman Sami Grasso nearly notched her second goal of the season with a shot off of a corner kick at the 61st minute, but the ball didn’t quite cross the goaline before being cleared away by a Davidson defender. Grasso harangued the Davidson keeper with four shots.

The outcome was never in doubt, as the Tribe owned every statistical category, and is riding a three game winning streak. After the August 28th loss to Maryland, the College’s attack has been cruising in fifth gear, outshooting every opponent.

The Tribe will face Princeton at home (1-1-2) Sunday at 2 p.m. at Martin Family Stadium. This non-conference matchup is the last for the Tribe, as the team begins CAA play at home against Northeastern (4-2-2) the following Friday.