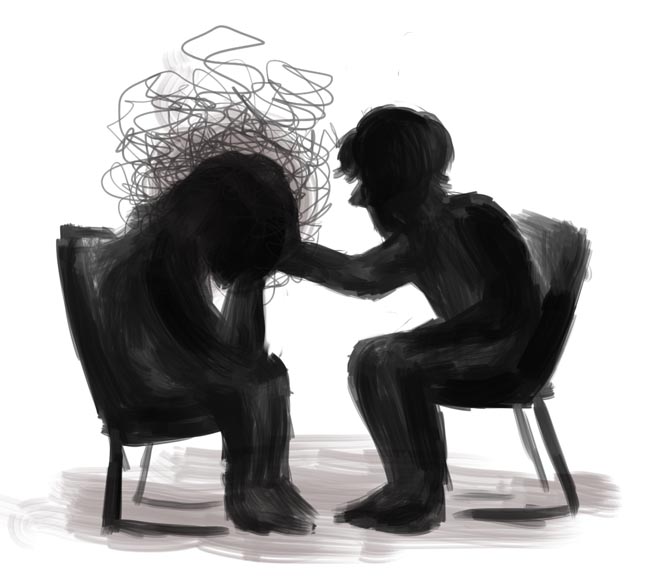 Peter Godshall and Troy Pelish were both members of the Class of 2015. Both committed suicide on campus, and their absences shape our legacy as a class.

We need to have an active discussion of mental health. Last week’s Mental Health Awareness Week showed the passion many students feel toward mental health; additionally, the week made strides to change perceptions of mental health on campus while increasing awareness of the services offered to students.

The men and women of the Counseling Center dedicate themselves to the treatment of mental health and their diligence has undoubtedly helped many of our classmates through trying times. However, structural shortcomings limit the Counseling Center’s ability to fulfill its mission.

Students’ testimonials and the official school statistics reveal an institution that is understaffed, under-experienced, tucked away in a dusty corner of a dusty building, and, ultimately, a comparatively low priority for the administration, even while it is one of the most essential aspects of our university.

During peak months, students usually need to wait around a week for an appointment. Of course, the urgency of the request helps determine how the center schedules its appointments, but the system is inadequate given the latent and often unobservable nature of mental illness.

With an appointment in hand, students must navigate through Blow Hall, where they enter the Counseling Center only to be met with a cramped pseudo-clinic. A lengthy process of forms and surveys asks students to self-diagnose, much like someone visiting a physician’s office for the first time. The dark, windowless reception area acutely reminds students just how far removed from the general populace they are. It’s no wonder students rethink the Center’s effectiveness after being discharged.

Students usually meet with “Psychology Interns” and “Advanced Practicum Trainees.” While these “interns” and “trainees” are likely knowledgeable and passionate practitioners, they are not licensed psychologists, and as such their work with students is practice toward getting their degree. Further, students report difficulty in scheduling a licensed practitioner, generally meeting with graduate students instead.

According to its website, the Counseling Center employs seven licensed clinical psychologists. However, whether because of a lack of funding or a need to offer hands-on experience in graduate programs, students don’t usually benefit from the expertise of a professional.

The Counseling Center officials often encourage students with serious mental issues to leave the school for off-campus resources, or to drop out entirely. While release from the high-pressure academic environment may help afflicted students — especially ones with severe cases — stories of official pressure to leave highlight an institution that is unequipped to treat serious mental problems and are emblematic of officials devoted to limiting liability.

The fiscal year 2014 budget reveals that the school projected to spend $4,100,000 on “Student Health and Counseling,” a category encompassing the Student Health Center and the Counseling Center. This figure represents 4.6 percent of Auxiliary Enterprise’s projected expenses ($89,600,000) and 4.5 percent of projected Auxiliary Enterprise revenue ($91,300,000), most of which comes out the board fee ($3,946) each student pays each semester. Taken in terms of the school’s entire operating budget, the projected amount spent on “Student Health and Counseling” makes up 1.1 percent. Furthermore, the “William and Mary Strategic Plan FY 2015-2019,” released in April, mentioned mental health concerns in just one sentence of the 23-page document.

Financial concerns aside, the Counseling Center’s physical limitations also call into question the College’s priorities. The Tucker and Tyler Hall renovations fall in line with its academically oriented brand. As it has for much of the College’s existence, academic success takes priority over nearly all other campus-wide initiatives. Look no further than the implementation of the third phase of the Integrated Science Center.

Student life enters the priorities equation somewhere after academic concerns. After a year’s delay, crews have gutted Chandler Hall for some much-needed reconstruction. The Williamsburg Hospitality House purchase signaled a move in the direction of higher-quality living options. Even the dining system underwent an overhaul, as the College agreed to terms with Sodexo to revitalize on-campus dining.

In the face of campus-wide construction and dining changes, the Counseling Center’s space remains unchanged with no foreseeable improvements.

Even following student deaths, the administration does little more than recognize a moment of silence at Convocation and host a vigil in the Wren Chapel. Student groups have been far more active. Students run Mental Health Awareness Week, organize HOPE-sponsored programs, and address mental health issues through club activities.

The administration has had its chances to become actively involved in the mental health discussion. A Counseling Center staff member attending and speaking a few words at Mental Health Awareness Week events does some good, but not nearly enough in the way of admitting the Center’s ineffectiveness in truly dealing with on-campus mental health issues.

Before an active, campus-wide discussion can take place, the College administration must acknowledge its failures. The administration’s emails detailing student deaths offer a sense of finality, an attempt to cover tragedy with platitudes. The administration remains silent to the point of hypocrisy. There is no conversation, no discussion — only deepest sympathies and a line about the Counseling Center’s availability.

Before constructive conversation can begin, the administration must acknowledge its implicit involvement in mental health issues. More can be done, more should be done, and the administration should begin with alleviating the Counseling Center of its structural shortcomings.

The Class of 2015 has lost two classmates to suicide and must begin holding the College’s administration accountable for the Counseling Center’s flaws. A discussion isn’t a final solution, but it holds potential for whole-scale change.