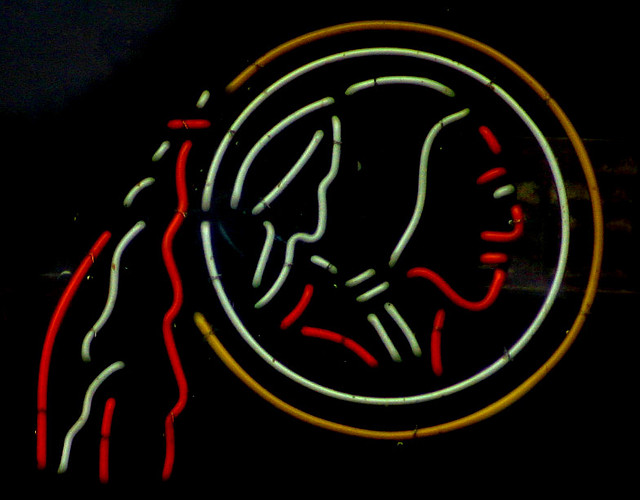 Can you think of a problem you have that, in theory, shouldn’t be a problem? It’s a “non-problem,” something that has an obvious solution, which, for whatever reason, you choose to ignore. Maybe you have an ant infestation because you won’t take out the trash. It happens, girl; go buy some Raid. Or maybe you’ve been exhausted all day because you stayed up until 4 a.m. watching Beyonce dance tutorials on YouTube. I totally get it — those are important goals. These non-problems plague our lives and, generally speaking, all logical people will follow the obvious solution and fix these problems, putting an end to their unnecessary suffering. The operative word here is “logical,” a quality the leaders of the National Football League and the Washington Redskins seem to lack.

I won’t pretend that I know much about the actual sport of football. I do know, however, that the business of football in America is a big deal and that the queen bee of this billion-dollar industry is the NFL. Like all other big businesses in our capitalist society, the NFL cares about two things above all else: its players’ safety and compensation. Silly rabbit, try again. Revenue and profits? Ding-ding! That’s pretty much all there is to it. Most companies make decisions with those two end goals in mind and the NFL is no different. That’s why it is shocking and confusing to me (and millions of other Americans) that the NFL continues to ignore the infamous issue of the Washington Redskins name. Yes, the NFL has taken several measures to “prove” that the name isn’t racist, but if the issue isn’t solved, it’s a good as being ignored. Here lies the NFL’s non-problem, because it has such a simple solution. Change the name. Why is this even a debate anymore? Why spend all the legal fees battling back and forth? Why have your brand’s name dragged through the mud, and those associated with it decried as racists? Change the name and admit you were wrong so we can move on to the next crisis.

How about the Washington Zoe Johnson’s? For the right price, my name could easily be up for franchise.

I mean, jeez Louise, NFL, what is the big deal? Is it that you can’t think of another name? How about the Washington Zoe Johnson’s? For the right price, my name could easily be up for franchise. How about the Washington [insert literally any other word besides one that is historically racist and derogatory]? Is the problem that it’s going to cost a lot of money to re-trademark a name, make all new promotional material, and train announcers not to say “Redskins?” That last one is probably the trickiest one out of all of these because it’s not like you don’t have the money, or the ability to borrow it. Look, if you need help figuring out how to borrow money from the government, again: Give me a call. I have a talent for this — just check my student loan debt. All jokes aside, the fact that the NFL is continuing to make huge profits off of that disgusting name is a real shame, especially when it’s a non-problem with an easy solution.

Why should we, as students of the College of William and Mary, care what the NFL does regarding this issue? Because like it or not, we are residents (or at least pseudo-residents) of Virginia, where the Washington Redskins headquarters is located. When you’re screaming “Go Redskins!” or decorating your room with a weird representation of a Tribal Chief, do you realize what you’re condoning? On more than one level, you are condoning the continual misrepresentation of a marginalized group. Sure, you can still be a fan of Washington’s team and love the game of football. I’m not saying you can’t. What I’m saying is that maybe we should step back and truly consider the words we say and the images we wear. Simple. Additionally, since mid-term elections are upon us, consider how Virginia’s candidates for Senate have reacted to this issue and whether you agree with that reaction.

The College knows all about this kind of problem. We used to be called the Indians, we had feathers all over the College’s paraphernalia, and we still do some sort of tomahawk dance with our arms when the football team scores a touchdown. However, we did what any logical institution does when faced with a non-problem — solved it! We changed our name and got rid of the feathers, and while the tomahawk dance is a part of that legacy, at least the leaders of our school had enough sense to put a formal end to the offensiveness. That’s a final score of William and Mary 1, Washington Redskins and the NFL 0.

Zoe Johnson is a Confusion Corner columnist and has considered changing her name to The Columnist Formerly Known as Zoe Johnson.