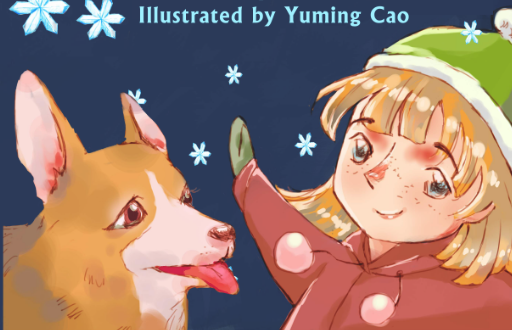 While having a job during college is not unusual, Yuming Cao ’17 is less than typical.

Last semester, Cao’s life drawing professor sent students in the class an email about an opportunity for an illustrating job with Freedom Forge Press. Cao took this opportunity and, over the summer, created the illustrations for “Cora Cassidy and the Craven Corgi,” written by Val Muller ’04. This children’s picture book is about a corgi that triumphs over her fears and finds freedom in the beauty and excitement of life.

“I have been drawing my whole life. Mostly in traditional styles, but also manga and anime,” Cao said, referring to two popular Japanese drawing styles.

Before this job, Cao had only worked with physical materials, usually preferring pen or pencil and colored pencil to create her drawings. However, this book required her to learn about digital art and how to create illustrations on a computer rather than on paper.

“Using digital art was hard but I felt accomplished to see my characters being liked by the publisher and by the writer,” Cao said.

Cao worked on the illustrations during the four months of summer break while she was at home in Beijing, using a tablet and stylus on a program called Painter to create her drawings before sending them via email to the publisher.

In addition to teaching herself how to create digital art, Cao had to collaborate with Muller and Freedom Forge Press from China. This proved somewhat difficult, Cao said, because she was unable to sit down with Muller to discuss the meaning of the story. Instead, Cao had to glean what she could from the text itself and from email conversations to make her drawings fit the personalities of the characters.

At first, Cao was nervous about sending in her illustrations because it was a big challenge for her to convey the events and meaning of the story through pictures. Cao said she thinks it is harder to illustrate books than to create a drawing from her own imagination, because her personal drawings can depict anything she wants, but her illustrations have to show the meaning of the text.

Cao worked on the illustrations during the four months of summer break while she was at home in Beijing.

“Everybody will imagine the story in a different way and sometimes I can’t come up with any ideas for drawings from the words,” Cao said.

However, after working for much of the summer on her illustrations, she said she feels her final product conveys the message of the story and the personality of Muller’s characters. Cao said she didn’t feel it was her best work, however.

“I’m not quite satisfied by what I’ve come up with but I think it was the best I could do when I was working on it,” Cao said.

To Cao, illustrating books is a way to continue learning about art in general and about her own abilities and preferences. She said the experience was good for exploring her options and varying ideas for what she wants to do in the future, but that illustrating isn’t her ultimate goal.

“I want to keep doing it — I like this job — but I think illustrating is going to be more of a hobby than a career for me,” Cao said.

She is currently planning to major in biology with a possible double major or a minor in studio art. She has thought about combining her passions for science and art by illustrating textbooks.

“My friend told me there is also ‘bio-art,’ where they use the fungus or microbes to do art,” she said.

She wants her love for art to remain a significant part of her life as she moves into the future. At present, she says illustrating books and taking art classes is the best way for her to actively develop her craft so that she can put it to further use in the upcoming years.

For the next book she illustrates, Cao said, “I would like to try another style of drawing because this [book’s] style is in my comfort zone. Maybe something less cute and with more mystery, like the Japanese style.”