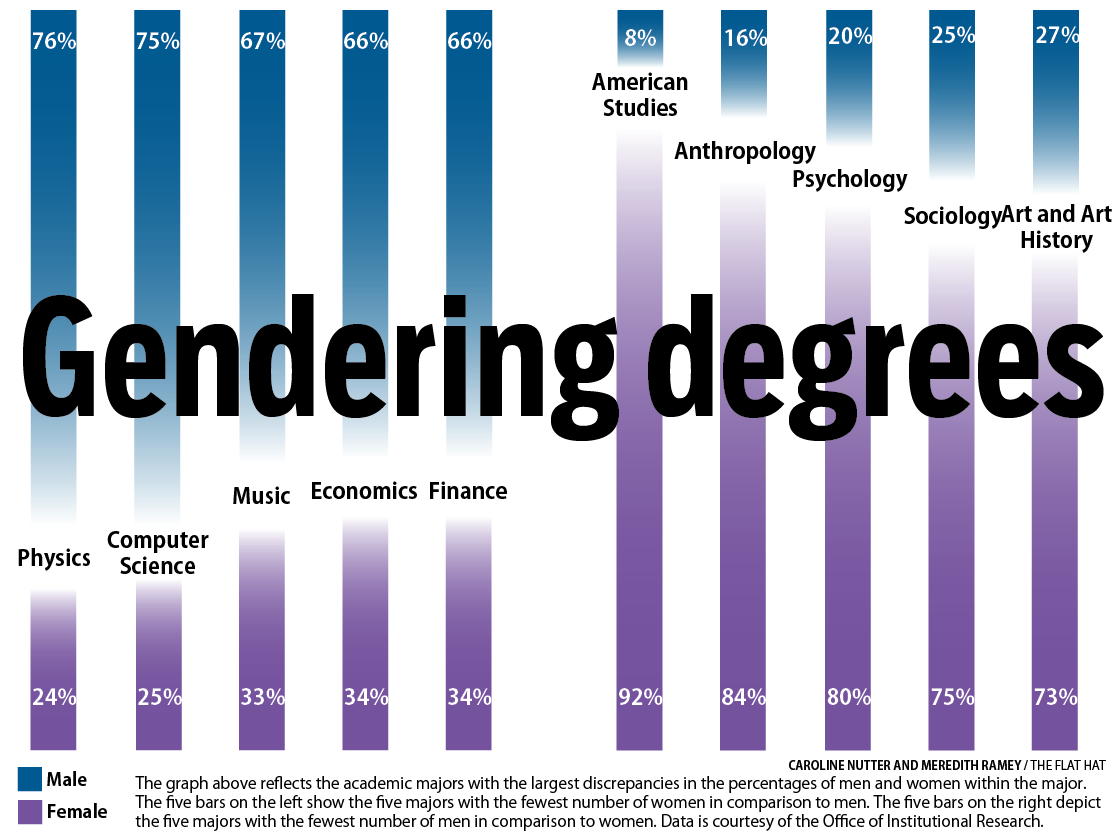 The majors that showed the most equal distribution among the genders were accounting, government, geology, international relations and public policy.

The most imbalanced majors were American studies, physics and computer science.

Many students may not be surprised by which genders tend to gravitate toward which academic fields. Derek Richardson ’18 said he believes there would be an imbalance.

“I don’t think there would be a balance,” he said. “I feel like some males tend to go one route and females go another. … I would guess that there are more men doing things at the business school or in sciences like physics, and perhaps more women doing English, theatre or film studies.”

“Actually, W&M has a much stronger representation of women in our undergraduate and graduate programs, higher than the national averages,” Smirni said in an email. “Ditto for women faculty in the program.”

Smirni spoke about the department’s efforts to be more inclusive toward women in a field that is typically very male-dominated.

“One of the efforts we make to increase participation of women in CS is to sponsor a group of undergraduate students to attend the ‘Grace Hopper conference for women in computing’ every year,” Smirni said in an email. “Students come back from Grace Hopper very excited, motivated, and sure that CS is the right major for them.”

Chancellor professor of physics David Armstrong shared a similar sentiment regarding the gender distribution in his department at the College.

“It is a well-known problem, and not just at W&M,” Armstrong said. “STEM fields do not have a proportionate representation of genders, and departments are very concerned about it.”

Armstrong said this affects the academic community, specifically at the College.

“First of all, there are additional challenges to young women entering these fields because they don’t see as many role models, which makes them think these fields are less inviting or appropriate, and this is limiting,” Armstrong said. “I think that’s the biggest effect on our community — women don’t ‘see’ themselves as often in faculty ranks, which discourages or dissuades them from entering a field.”

The College has a higher number of women majoring in STEM fields — around 25 percent — than the national average of 17.8 percent.

The College has a higher number of women majoring in STEM fields — around 25 percent — than the national average of 17.8 percent. However, a number of faculty and students have agreed that the College is not exempt from the problem of underrepresentation of females in these fields.

As far as the imbalance in the scientific community goes, Armstrong said there are a number of unproven hypotheses, one of which is discouragement toward females interested in STEM that begins at a young age.

“I think that at the elementary, middle and high school levels there is a conscious or unconscious gender bias in the teaching,” Armstrong said. “I think it is lessening significantly, but it still is the case.”