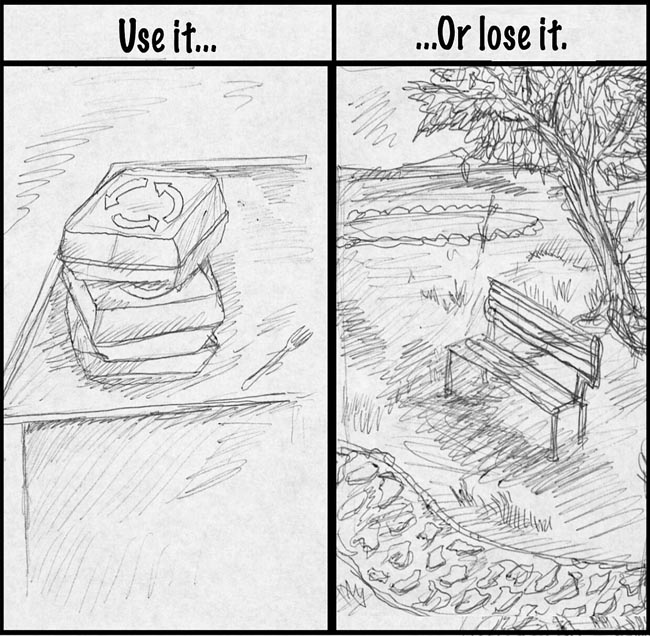 As far as universities go, the College of William and Mary is no slacker when it comes to promoting sustainable practices. We have abundant recycling bins, a campus herb garden and several student environmental groups covering a wide range of sustainability issues.

But how much good does a recycling bin really do if nobody is motivated to use it?

It’s not that students don’t care about the environment; it’s that they just aren’t motivated enough to make a lasting change. The main sustainability issue we struggle with as a campus is laziness.

Take, for example, the dining service’s new “Choose to Reuse” initiative. In order to cut down on the waste generated by the to-go containers, Sodexo USA has introduced the reusable to-go box. The green plastic containers are larger than their paper counterparts, allowing for more snack storage. They are sturdier, too, and won’t let your sloppy chili leak out through the bottom. And of course they are better for the environment. So why do I still see the paper boxes choking the trash cans on the Sadler terrace?

The main complaint I’ve heard is that it is inconvenient. To some, the boxes are just one more thing to remember, while disposable containers can be thrown away without a second thought. But that is exactly the problem. We aren’t thinking. A key word in the phrase “eco-conscious” is the word “conscious.” In order to effect change we have to make a concerted effort. In other words, we have to give a second thought.

It is true that many of the more obviously green options out there can require a serious lifestyle change, but I’m not asking you to purchase an electric car and install solar panels on your dorm roof. Making a point to find one of the various recycling bins on campus, even though it might be a few steps out of your way, or swapping out a disposable container for a reusable one, is about the lowest form of commitment one can make to go green. They even wash the boxes for you, and you don’t have to return them until the end of the semester. It is environmentalism tailor-made for busy (read: lazy) college students. It could not be easier.

And making a conscious effort to change is definitely worth it, because the health of our environment is one of the few causes that directly affect everyone, not just on this campus or in this country, but all over the globe. Environmentalism is not limited to environmental science majors. Every aspect of the human experience — from economics to Francophone studies — is dependent on us having a planet to live on for the foreseeable future. And if that isn’t sufficient motivation for you, then we have even bigger problems than I thought.