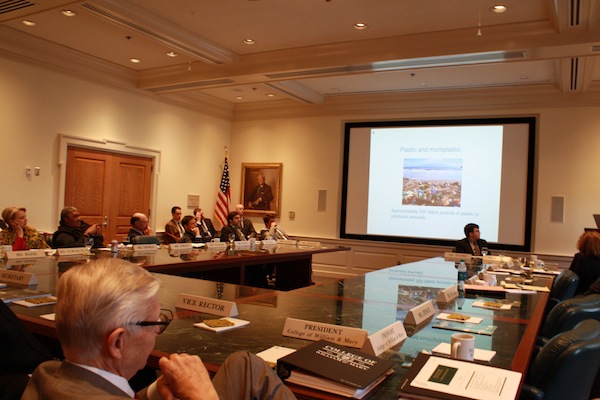 Secretary of the Board Thomas R. Frantz ’70, J.D. ’73, M.L.T. ’81 began the session with his results of the Virginia Beach Bio Task Force. Following Gov. Terry McAuliffe’s call to improve the bioscience industry of Virginia, Frantz and the task force sought ways to respond. Franz recommended attracting companies to the area that specialize in analytics and healthcare population management. In particular, he noted North Carolina as the example for the Virginia Beach region.

“We want this region focused on biomed, like greater Charlotte, and we want to focus on the four regions of biomedicine,” Franz said, referring to the opportunities for biomedical development in diabetes, cardiovascular disease, neuroscience and traumatic brain injury research.

Vice Provost for Research and Graduate/Professional Studies Dennis M. Manos then introduced translational research currently being conducted at the College. Although he emphasized the work’s economic benefits, he reassured the Board that the College’s true loyalties lie in educating its students.

“The development of the intellect is our real mission — the primary mission is not so much to make companies, but to keep our faculty and our students aggressively engaged,” Manos said. “We know we have an obligation to do economic development, and we have taken that role pretty seriously [at the College].”

According to McDevitt, one in six crab pots are abandoned annually in the Chesapeake Bay. These abandoned traps keep fishing despite their abandonment, depleting fisheries. Professors and inventors at the College have responded by developing patents for designs that would help prevent these traps from being abandoned.

“About one in four universities are net profitable from technology transfer operations,” McDevitt said. “William and Mary is one of them.”

The meeting concluded with an update from professor John P. Swaddle’s Institute for Integrative Bird Behavior Studies. Swaddle spoke of his work to interfere with bird communication in order to create safer skies for planes and birds alike.

“No one’s thought about jamming bird communication to solve this problem — they’ve only thought about scaring birds,” Swaddle said.

He also emphasized the interdisciplinary work he’s done with this research.

“The key thing here is that I was able to work with an engineer on this as a biologist. Then we were able to work with business and law students — that doesn’t happen at that many schools,” Swaddle said. “We don’t have departmental boundaries that we can’t cross.”