Home Latest News EU ambassador to US speaks at the College 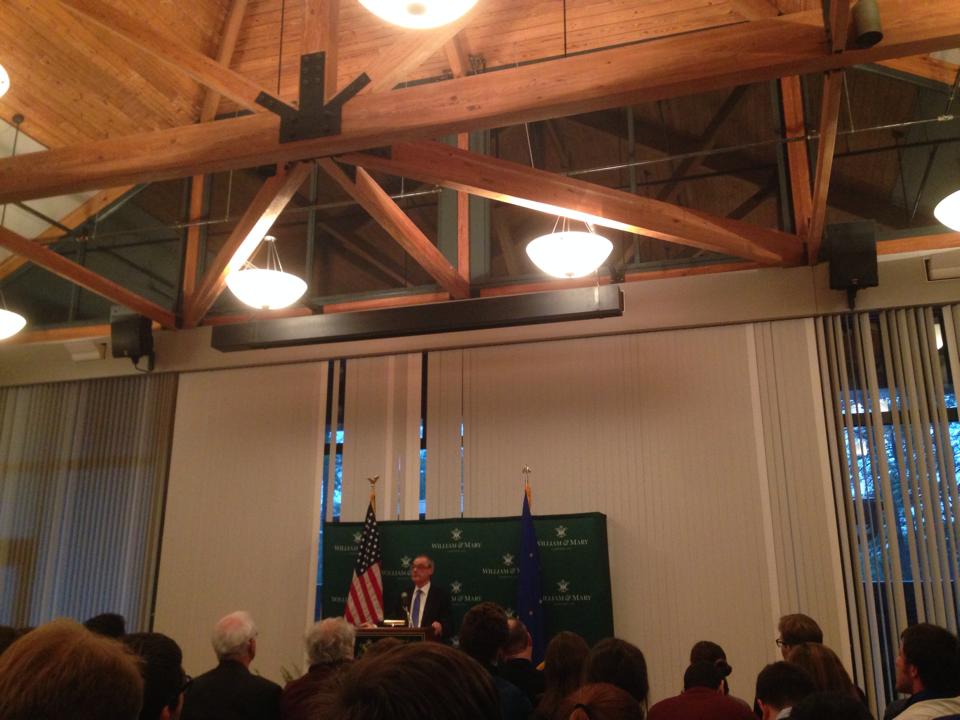 The TTIP agreement, introduced with the intent of fostering multilateral growth, has faced criticism for potentially increasing the role of corporate power at the cost of government regulation.

O’Sullivan was appointed to his position in November. He has worked at the EU for 35 years. O’Sullivan is originally from Ireland, and this trip to the College was his first trip out of Washington, D.C. during his time as Ambassador.

In the latter portion of the talk, O’Sullivan focused specifically on US-EU relations, discussing how the Atlantic Alliance and the transatlantic corridor are becoming increasingly important in due to globalization.

O’Sullivan described the TTIP as a next step for US-EU relations, which would reduce tariffs, lessen the cost of doing business and push for a higher global standard of production.

“This agreement is taking the relationship to a new level,” O’Sullivan said. “What’s not to be gained. … Free trade is unequivocally a creator of net wealth.”

On the topic of the TTIP, the ambassador stated that protectionist policies have no place in an increasingly connected global society.

“We don’t have the luxury or choice to shut ourselves off from world trade,” O’Sullivan said.

O’Sullivan also answered a number of audience questions centered on various issues, including the Ukrainian crisis, the Middle East and the Charlie Hebdo terrorist attacks in Paris. He addressed how EU membership affects national sovereignty, austerity measures in the Eurozone and Turkey’s bid for full membership in the EU.

Vice Provost for International Affairs and the Director of the Reves Center for International Studies Steve Hanson talked about how hosting speakers like O’Sullivan can increase the prestige and legitimacy of the College’s international relations program.

“It’s really important to have distinguished, important speakers,” Hanson said. “They can see our students in action and leave with a strong impression of our community.”

Hanson also mentioned how such VIP guests can help with networking.

“They remember we can stay in touch, and this means many more connections for our students and faculty to make use of,” Hanson said.

Student attendee Lydia House ’16 expressed her enthusiasm for and engagement in some parts of the talk, and her dissatisfaction with a few points.

“I liked it, I thought it was impressive to get a speaker of that standard,” House said. “Though it didn’t really show the views of individual countries and was very all-encompassing — it toed the line of the EU’s real views on the subject.”

House also said that she felt such speakers could spark the interest of any student at the College, and that background knowledge in the EU and government was helpful, but not necessary.

“We have a cool class called international political economy that deals with things like that,” House said. “A deeper knowledge would help, but a Wikipedia knowledge would be all you need to be set.”

“Considering how close we are to Washington, I think that would be great,” House said.