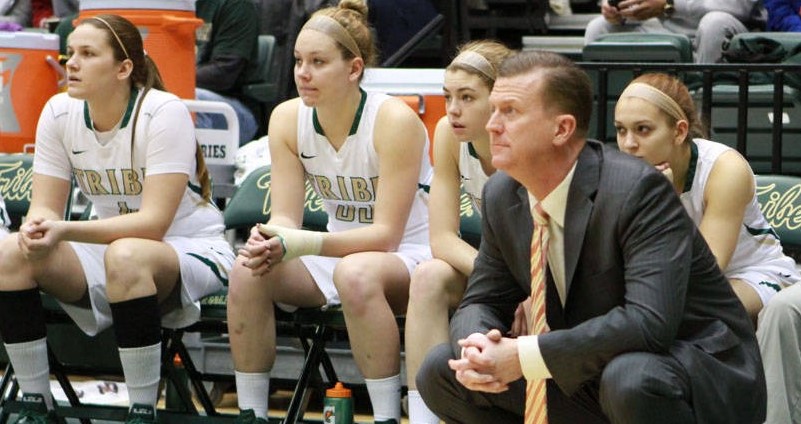 When sophomore guard Marlena Tremba hit nothing but net on consecutive three-pointers less than three minutes into the game, one got the sense this might be one of those games when things go right for William and Mary. After sophomore guard Latrice Hunter effortlessly dropped in a hook-shot with no angle, senior guard Jazmin Boone nearly notched a triple-double and freshman center Abby Rendle tied her career-high in points, it became clear to everyone in Kaplan Arena Wednesday that the College could not be refused victory. The Tribe (15-14, 9-9 CAA) played to perfection in a 68-56 win with authority over the Tigers of Towson (10-20, 6-12 CAA).

“Great overall win, great way to end the season with two straight home wins” head coach Ed Swanson said after the game. “I think the most impressive thing… we stared the conference  season off, the second time we lost to James Madison, we were 1-7 and we ended 9-9 [in Colonial Athletic Association games].It’s really a credit to the kids in this program at 1-7… fighting back the whole year and believed, and finishing the conference at 9-9. That’s one of the most impressive things I’ve seen in my coaching career.”

The victory meant far more to the Tribe than capping a three-game winning streak to end the regular season. With another tally in the W column, the 2014-2015 squad surpasses the 14-win seasons of 2007-2009 for the best season of basketball at the College since the 19-win season of 2006-2007. This is the best season under Swanson, who joined the Tribe in 2013.

The Tribe also secured a winning record, hardly a given with the 6-10 record and seven-game slide the Tribe faced on Jan. 15 of this year.

When asked about the significance of a winning season for the recently under-performing program, Swanson focused on the future, saying, “We hope it’s the beginning of many, many more.When we’re successful in the future, we can point back to this season.”

When we’re successful in the future, we can point back to this season.”

Right off the whistle, the Tribe attacked the rim from the perimeter. Tremba had the hot hand early with 8 points in just three minutes and 12 seconds. Boone continuously drove into the defense, and either made the layup or passed through the double-team to an open Rendle, who easily cashed in layups for the College en route to a career-high 18-point performance.

After initially trailing 17-8, the Tigers began to build some momentum midway through the first half, narrowing the deficit to 21-17 with 10:40 on the clock. However, a pair of Rendle blocks and forced turnovers by Boone insured the Tigers had reached the high-water mark. The College seized a double-digit lead that persisted for all but 34 seconds of the final 42 minutes of action en route to the 68-56 win.

Boone, who finished with 9 assists, 16 points, and 12 rebounds for a double-double, attributed the Tribe’s offensive success to a lack of turnovers.

“We have to take pride in our possessions… we’re comfortable in the system and finding open shots. Our defense has always been there for us and now the offense is catching on,” Boone said.

Swanson did not express concern about the less-challenging matchups to close the season.

“We have  to play 18 {conference} games… we play them when we play them and we learned early on from our mistakes in the conference,” he said

The Tribe led the entire forty minutes. The College has led in over 98 percent of total regulation time in the past three games.  However, Swanson still sees areas in need of improvement, particularly rebounds; one of the few areas Towson bested the Tribe with a 44-40 advantage.

With the victory, the Tribe secures the No. 6 seed for the CAA Conference Championship Tournament, with the first round game against No. 3-seeded Hofstra slated for 7:30 p.m. March 13.

After the dominant win and flipping a dismal season into a program highlight, the Tribe was in high spirits with momentum on their side entering the postseason. Perhaps nothing captures the excitement of the team better than Swanson’s confidence.

“Man, I wish the conference tournament was this weekend,” Swanson said.