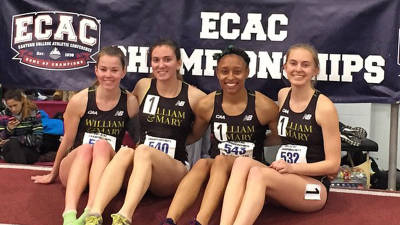 William and Mary traveled to Boston over the weekend to compete in the men’s and women’s conference championship meets. The men’s squad tied for 20th in the Intercollegiate Association of Amateur Athletes of America Championships, while the women took seventh in the Eastern Collegiate Athletic Conference Championships.

The College’s 11 male qualifiers started IC4A competition Friday as sophomore Alex Hedrick took on the first four events of the heptathlon. Entering the meet as the No. 11-seed, he ran a personal best in the 60-meter dash to finish fourth in seven-and-16-hundredths seconds. Hedrick jumped his second-best lifetime performance in the long jump for the second event with a score of 6.59 meters. Earning another personal record, Hedrick put the shot 11.01 meters.  Ending the day with a 1.76-meter high jump, Hedrick stood in eighth place after the first four heptathlon events.

Hedrick’s solid performance continued in the heptathlon Saturday with the 60-meter hurdles, pole vault, and 1,000-meter run events. He took 11th in the hurdles, finishing in a personal-best 8.97 seconds. In the pole vault, he took fifth place, clearing a height of 4.35 meters. In the final event, Hedrick ran the 1,000-meter run in 3:03.80, earning him 14th place. Hedrick broke the College individual record by 45 points, finishing with 4,778 for a ninth place finish overall in the heptathlon.

Another school record fell as junior Brian Waterfield threw 19.90 meters for second-place in the weight throw event, earning him his career-first All-East honor Saturday. Waterfield continued to perform well  with a second All-East distinction on Sunday as he put the shot for seventh-place with his season-best 16.32 meters in the event.

On the track, the Tribe had two finals qualifiers competing on Sunday.  Freshman Davion Hutt, who currently holds the school record in the 60-meter dash, sprinted into sixth-place at 6.91 seconds for All-East honors. The College’s last event was the 4×800-meter relay.  Featuring the team of freshman Dawson Connell, juniors Jomar Aryee and Ricky Cappetta, and sophomore Troy Sevachko at anchor, the Tribe finished in 7:40.80 for seventh-place, earning All-East distinction.

The men scored 15 total points, tying Rider, Lehigh, and Coppin State at 20th in the final standings, yet still 43 points behind first-place Monmouth.

The women’s squad achieved two other personal bests with junior Claire Tito and senior Heather Clagett. Tito broke her 800-meter lifetime record by 0.23 seconds, finishing in 2:10.97 in the preliminaries; however, the race was tight and Tito did not qualify for the finals by 0.21 seconds. Clagett cut 2.25 seconds off her personal-best in the mile run, finishing 15th in the preliminaries at 4:56.76, missing the finals by 3.16 seconds.

The Tribe continued its top-tier performance Sunday by winning the distance medley relay for the first time in College history for both indoor and outdoor track. The team consisted of Clagett on the 1,200-meter leg, junior Ashley Woodard on the 400-meters, Tito on the 800-meters, and McGovern anchoring in the mile. The team finished in 11:38.50, shaving 1.11 seconds off of the previous school record. The Tribe won definitively, with McGovern crossing the finish over nine seconds ahead of the competition.

The College’s last event of the ECAC Championships was the 3,000-meter run. Freshman Regan Rome finished third at a personal-best 9:30.65, earning her All-East honors as well as the distinction as the best performance by a freshman in Tribe history. Freshman Molly Breidenbaugh finished 11th in her personal-best 9:39.50.

The distance medley relay win vaulted the Tribe into seventh place after the final day of events, earning 36 points.  The College stood just 16 points out of first place behind ECAC champion University of Connecticut.

The conference meets wrap up the College’s indoor track and field season.  The Tribe returns in outdoor track March 20-21 to host the Tribe Invitational.