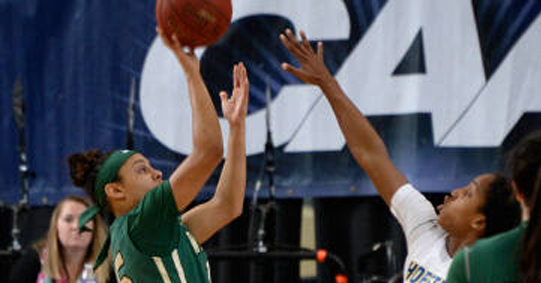 After wrapping up the regular season on a three-game win streak, William and Mary traveled to the Show Place Arena in Upper Marlboro, Md., hoping to win its first Colonial Athletic Association tournament game since 2008. The No. 6-seeded Tribe took on No. 3-seeded Hofstra Friday in the quarterfinals, falling 64-51 to end the College’s season.

The Tribe (15-15, 9-9 CAA) split its regular season series with Hofstra (20-12, 11-7 CAA), each winning their respective home matchup. At the neutral site of the CAA tournament, the Pride dominated most of the game.

In the first three minutes, the College took the lead 3-2; however, this would be the only Tribe lead of the contest. Hofstra capitalized on the College’s offensive miscues by forcing turnovers throughout the first half. With 15 minutes remaining in the half, the Pride led 9-5. After another five minutes, Hofstra held a 16-8 advantage, outmaneuvering the Tribe on both sides of the ball. Hofstra’s man-to-man coverage was tight; this not only forced turnovers but forced the College to take risky shots. The Pride especially focused on sophomore guard Marlena Tremba, face-guarding her to prevent her from making her trademark three-pointers.

“They were face-guarding me, and I’d say in the beginning of the game I anticipated that, so with my cuts I tried to make counter cuts instead of just waiting for the screen,” Tremba said.

The College fought back, embarking on a 10-3 run mid-way through the half.  The scoring surge dropped the Tribe’s deficit to a single point as the Pride led 19-18 with five minutes, 29 seconds to go in the first half. However, the College would never get any closer to taking back the lead for the remainder of the matchup.

Hofstra tore apart the Tribe defense with a 7-0 run into the final minute of the first half to take a commanding 29-20 lead. The College capitalized on a free throw and an impressive lay-up by senior forward Jazmen Boone off a Tremba steal, but Hofstra retained a 31-23 lead at half Coming out of the locker room, Hofstra caught the Tribe off guard with a 10-1 run over the first four minutes of the second half. Just under the 12-minute mark, the Pride led 48-28, a 20-point advantage and the largest difference of the game.

The Tribe began its comeback bid following a media timeout. With more aggressive play, the College began to route the Pride’s defense late in the half.  Eventually, the Tribe stood at a more manageable nine-point deficit with the Pride still leading 60-51 with 67 seconds remaining. In the last minute, the College missed four consecutive three-point shots while the Pride made four free throws. The missed shots from beyond the arc prevented the Tribe from completing the comeback as Hofstra eliminated the College from the CAA tournament with a final score of 64-51.

“We couldn’t get in any sort of rhythm offensively and started settling for shots,” head coach Ed Swanson said. “I thought in the first half we did a good job defensively … we hung with them on the glass, but our offensive {was} inefficient in terms of our turnovers and forced shots made the outcome of the game.”

“We couldn’t get in any sort of rhythm offensively and started settling for shots,” head coach Ed Swanson said. “I thought in the first half we did a good job defensively … we hung with them on the glass, but our offensive {was} inefficient in terms of our turnovers and forced shots made the outcome of the game.”

The key to the game proved to be Hofstra’s shooting advantage. The Pride was 24 for 55 in field goals compared to the Tribe’s 19 of 60. From beyond the arc, the College led Hofstra with six three-pointers to five, but the Tribe missed 13 crucial attempts while Hofstra only missed 11. The foul line was instrumental in dictating the outcome as well, as the Pride drew more fouls and made 11 free throws in 19 attempts while the College made seven of its attempted 14.

Leading the Tribe, Tremba tied the game-high with 17 points, and sophomore forward Alexandra Masaquel led both teams in rebounding with 13 boards. Blocks were another important statistic for the College: Freshman center Abby Rendle broke the freshman block record during the game, putting up three more for a season total of 68.

The College is most likely done for the 2015 season after the loss, but there is certainly room for optimism about the future. This was the first season since 2010 where the Tribe had more than 10 wins, an improvement from its eight total wins in 2014. It is also the first time since 2007 the Tribe has a winning regular season record. Swanson attributed the improvements to the senior players.

“The returning players, myself, and obviously William and Mary owe this senior class a debt of gratitude,” Swanson said. “You know there’s got to be a foundation before you build anything, and [the seniors] are the rocks we built on this year.”