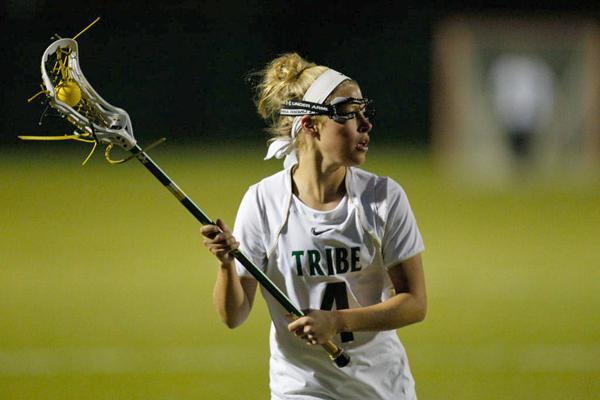 William and Mary lost its second straight game to an Atlantic Coast Conference opponent, falling 12-10 to Virginia Tech at Thompson Field in Blacksburg, Va. in the last non-conference matchup of the season.

Following a Bromley goal for Virginia Tech, a groundball pickup by junior defender Catherine Shaughnessy led to junior midfielder Michelle Goss’ goal on the other end. After a foul by sophomore defender Julia McGrath, the Hokies’ Megan Will scored from the free position, tying the score at 3-3 and leading to a Tribe timeout with 20:42 left to play in the first half.

After the timeout, Bartley beat junior goalkeeper Meredith Crizer for her second goal of the game. Virginia Tech’s Kristine Loscalzo followed with a goal 36 seconds later, increasing the Hokies’ lead to 5-3 and prompting a change in goal for the College, as sophomore goalkeeper Alex Lista replaced Crizer in front of the net.

The Tribe offense picked up after the substitution, but could not find an end product as the Hokies’ Meagh Graham made two crucial saves. A foul by Quinn resulted in Bartley’s third goal of the game, as she completed her hat trick with a free position shot. Another Quinn foul resulted in another Hokie goal from free position as Virginia Tech’s advantage grew to 7-3, with Crizer returning as goalkeeper following the goal.

The College finally broke through with 9:19 to go in the half, as junior attacker Zoe Boger scored following McGrath’s ground ball pickup. Both teams struggled to score as halftime approached, the ball constantly changing possession. With 48 seconds remaining, Bartley scored her fourth goal and the first half ended with the Tribe down 8-4.

The College opened the scoring in the second half, as freshman attacker Abby Corkum converted from free position. Bartley answered with her fifth goal a little over a minute later.

Both teams created chances over the next several minutes, but could not draw further blood. Crizer made two key saves, while Quinn put a shot wide. The College finally broke the drought with 19:20 left, as a Loscalzo foul resulted in a goal for senior attacker Ellen Shaffrey from free position to bring the Tribe within three.

With 18:23 to go, Corkum scored her second goal from free position; the Hokies immediately called a timeout. The next eight minutes provided no goals, as each team turned the ball over three times. Virginia Tech finally scored following a Goss turnover in Hokie territory, putting the Hokies ahead 10-7 and forcing a Tribe timeout.

Corkum completed her hat trick shortly after the stoppage in play off an assist from Shaffrey. After a Virginia Tech timeout with 7:08 to play, Bartley scored her sixth goal of the game, which Shaffrey answered with a goal 31 seconds later.

Will soon followed with her second goal of the game and her 29th on the season, putting the Hokies’ advantage at 12-9 with around five minutes to play. Quinn fired a shot at goal with 3:52 remaining, but Graham saved the attempt. The Hokies controlled possession for the next two minutes, turning the ball over with under two minutes to go. With 1:27 on the clock, Shaffrey’s shot hit the post, and the Hokies picked up the ground ball.

Following a Bartley turnover, Shaffrey scored the final goal of the game with 26 seconds left. The Hokies ran out the remaining seconds, and the game finished at a final score of 12-10. The Tribe opens Colonial Athletic Association play Friday at Drexel in Philadelphia, Pa., scheduled to start at 7 p.m.