Home Latest News Above and beyond 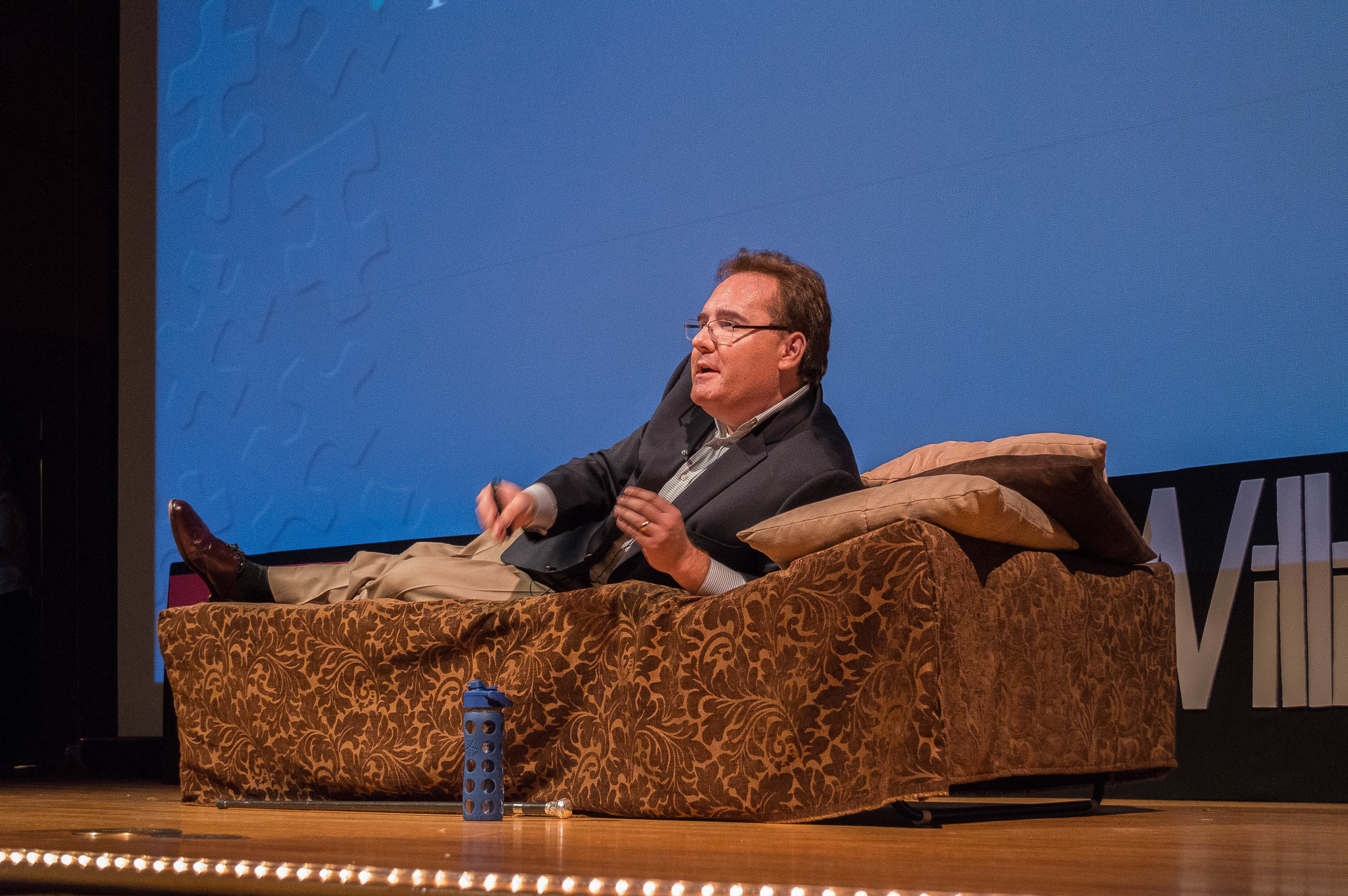 The College of William and Mary hosted its third TEDx event this Sunday featuring seven speakers from a wide range of disciplines. Hundreds of audience members gathered to listen to their 18-minute talks.

“We at William and Mary are a community invested in sparking change,” Chase Jordan ’15, co-president of TEDxCollegeofWilliam&Mary said in his opening remarks.

First to take the stage in Commonwealth Auditorium was Mark Wood, Juilliard-trained violinist, founding member of the Trans-Siberian Orchestra, and creator of Wood Violins, which makes electric violins. He captured the audience with effortless demonstrations on his self-supporting electric violin and the story of how he pushed beyond the idea of an instrument and musicianship. Wood told the story of how music of the 1970s allowed him to find himself as more than a classical violinist. He spoke extensively of his music education program, the Mark Wood Electrify Your Music Foundation, which brings classical and rock music together to teach school-age children musical skills while providing a fun background to help kids find their path as Wood did in his early life.

“These [violins] are not novelty instruments, I needed these to find my voice,” Wood said.

Next was the College’s own professor John Swaddle of the biology department, who described his research on the sonic net — a way to project sound to a contained area. Using the example of the starling, a bird indigenous to North America, Swaddle illustrated how birds create problems including power outages, aircraft damages and loss of agriculture. The sonic net was inspired by human noise pollution, which was discovered to drive birds away from the loud area. Swaddle talked about how the sonic net will be useful not only for the American agriculture and aircraft industries, but also for developing countries whose citizens depend on subsistence farming for their livelihoods.

Colonel Michael Coolican urged the audience to think beyond conceptualizing the military only through its lethal weapon technology. After describing his time flying Harrier jets, he went in depth about his newest role as Director of the Joint Non-Lethal Weapons Directorate. The Directorate functions as a research and development group that looks into technology for crowd control and citizen relations. The non-lethal solutions are mostly used in aid missions such as disaster relief. Some examples of the technology include a Star Trek-style universal translator, a fluorescent green signal light to indicate military presence to nearby citizens, and a concentrated crowd-dispersion emitter that uses heat waves to make people uncomfortable to the point of moving away from the source.

“Non-lethal weapons in the military are an oxymoron, but we need those complimentary tool sets,” said Colonel Coolican.

Director of the Casual Sex Project and professor of Human Sexuality at New York University, Dr. Zhana Dr. Vrangalova opened the conversation about causal sex and breaking everyday social barriers and stigmas. Dr. Vrangalova began by emphasizing the benefits of sex in general and how it doesn’t need to be confined to a committed relationship. She used statistics to show the audience that casual sex is not as frowned upon as many people think, and furthering the point; she then challenged those in attendance to explore non-traditional relationships such as polyamory.

“[The Casual Sex Project] is a chance for people … to make sense of their experiences through storytelling,” Dr. Vrangalova said.

Dr. David Casarett, M.D., a physician, researcher and tenured professor at the University of Pennsylvania Perelman School of Medicine, raised the question of what constitutes death.

“When is someone really and truly dead?” he asked.

As he recounted a story of a toddler being resuscitated after not having a heartbeat for three hours, Dr. Casarett spoke about how widespread knowledge of CPR and persistent emergency personnel have redefined the process of declaring someone dead. He described how it is becoming increasingly harder for paramedics to stop trying to save a life because the line between life and death is now extremely thin. In the current era, this is due to the enhanced medical technology and knowledge since the induction of lifesaving techniques in 18th century Denmark.

Author and award winning journalist Stephanie Hanes, whose work has been published in “Smithsonian Magazine” and the “Christian Science Monitor,” called for her industry to stop spreading fear with their reporting. Detailing the four years she lived in South Africa, Hanes talked about how her focus in journalism is to look at the nature of people and how issues are relevant to them. She elaborated to say that the current narrative in the news uses a combination of clever headlines and fear solely to gain readers. Harkening back to her years in Africa, she was shocked to see how the continent is portrayed in popular media as a center of chaos, instead saying that news should describe facts and how they realistically affect readers’ lives.

Professor Sean Tarter, Adjunct Professor of Economics at the College, rounded out the talks. Combining religion, time travel, finance, thermodynamics and entropy, he guided the audience to think beyond time. Using graphs of the thermodynamic property of entropy, he illustrated how it is the same as graphic representations of some financial equations. He talked about the controversial idea of time travel and how we could be time traveling constantly and not realize it due to the similarities between the forward progress and reversal of time.

The audience was invited to engage in conversation with each other and the speakers at a reception following the talks.

“[Today’s event] has brought us beyond our imaginations,” Chase Jordan said in his concluding comments.