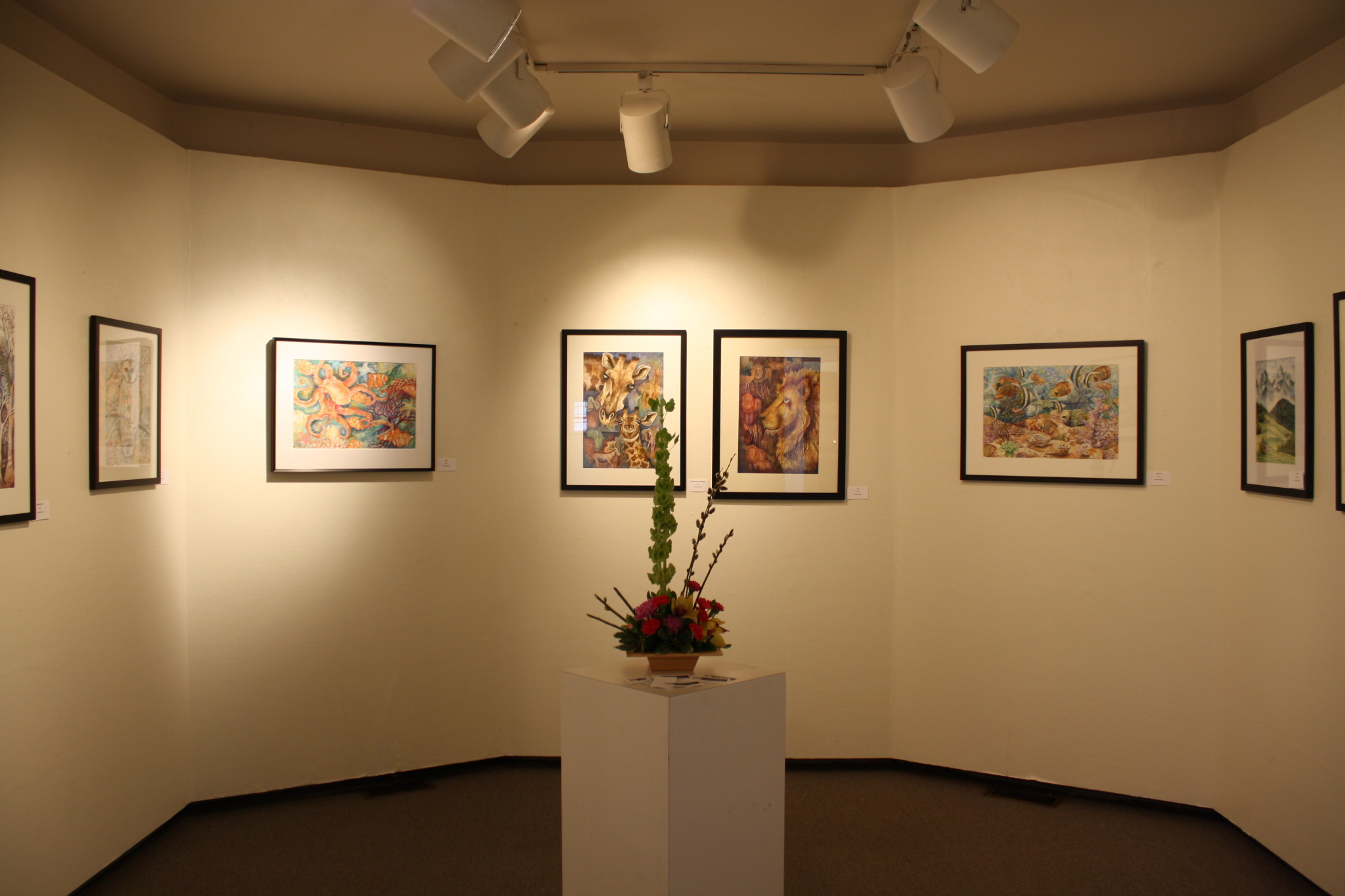 While walking from room to room in This Century Art Gallery, it is easy to get lost in the natural world. From swimming with realistic underwater life, to watching trains on a hillside, to walking between peonies and chrysanthemums, visitors can immerse themselves in the featured paintings and contemporary works of art that portray a variety of images from nature.

The gallery, located on North Boundary Street, will show its current exhibit, featuring the work of two local artists, Kristen Dahms and Juliet Kirby, until May 1.

“We do have some local artists that apply to have an exhibit and are accepted but also try to bring people in from other locales so that people in Williamsburg could see contemporary art that they don’t normally get to see,” Artistic Director and Vice President of the Board Apryl Altman said.

Though the show opened Monday, March 24, the exhibit setup process began a year ago. Submissions — with anywhere from 10 to 18 applicants — were online until mid-January of last year. After the application closed, a committee chose the artists for the upcoming year. They reviewed Dahms and Kirby last year for this year’s exhibits, giving the artists around a year to compile their work.

The gallery’s stated mission is to bring contemporary art to Williamsburg[.]

The gallery’s stated mission is to bring contemporary art to Williamsburg, an area with a heavy concentration of 18th-century art. Exhibits featuring local contemporary artists are one way the gallery works toward its mission. Members of both the gallery and the membership board also try to recruit talented artists year-round by recommending them to apply.

Dahms graduated from the Savannah College of Art and Design in 2009 and moved to the Williamsburg area not long after. Her mother, also a painter, has many connections in the area who helped Dahms find opportunities to show her work. She then met Altman, who encouraged her to apply to the gallery’s exhibition, and was finally offered a spot in an exhibit for this year. Since she plans to move to New York soon, Altman wanted to ensure that Dahms’ work was featured before she left.

“I like to develop a story, and explore with texture, color, patterns, water colors, ink, scrapbook paper, markers, and hidden imagery.”

“Nature is my main theme, and usually it is something so simple, like hot air balloons, and I just dive into that world. I like to develop a story, and explore with texture, color, patterns, water colors, ink, scrapbook paper, markers, and hidden imagery,” Dahms said. “I write down words, and explore everything that is in that world.”

Kirby, on the other hand, is a botanical artist, who takes nature and breaks it down with accuracy and fine attention to detail.

“[Kirby] doesn’t usually apply to juried art shows where she is competing against other artists unless they are other botanical artists. Oftentimes, the judge is a botanist, not an artist,” Altman said. “That’s what she is trying to do: come up with an actual rendering of the plant, and they are extremely precise.”

Thus far, Altman says that the new exhibit has been well received.

“We had a very good response at opening, especially to Kristen’s work, but only because Juliet is more well-known to the members. They love Juliet’s work too,” Altman said.

Arya Espahbodi ’15 said in an email that though both artists bring an individual perspective to the gallery, Dahm’s work is both expressive and unique.

“As a cellist, I learned that no two cellists interpret the music or play a song the same way, no two poets write the same way, and no two artists express themselves the same way. That is why I prefer Kristen Dahms’ work,” Espahbodi said. “As much as I appreciate the natural beauty in Juliet Kirby’s paintings, I believe that individual uniqueness is beautiful in the arts. Kristen’s paintings are a unique and different perspective on real animals and environments. They are a balance of accuracy and detail with creativity and uniqueness and she expresses herself well.”

While this non-profit gallery is small, it features multiple artists throughout the year, including high school exhibits and local artist exhibits. It also doubles as an art center, reaching out to the community through workshops and classes.

“We hope that students will come in and look around and see what we have to offer as far as art,” Altman said. “We want to get their reaction and their feelings about what they would want to see come to Williamsburg in the way of art. We are always looking for new, young and fresh ideas and would welcome more involvement by the William and Mary community.”