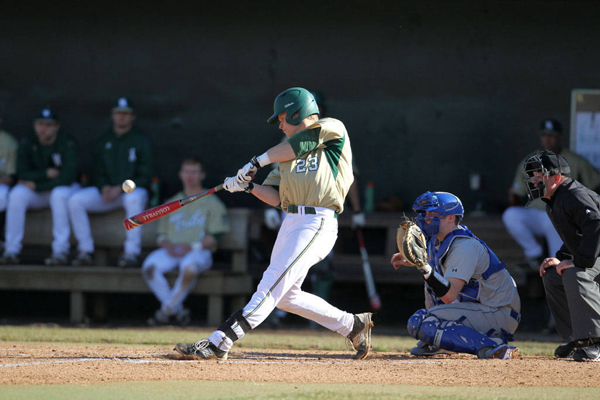 William and Mary spent the weekend on the road playing a three-game series at Colonial Athletic Association opponent Towson. The Tribe came away with two wins and one loss, bringing its record to an even .500 on the year. Friday, the Tribe lost the first game 13-7, but rebounded and won the subsequent games 6-5 and 8-3.

Friday night, the Tigers had one of their best offensive outputs of the season, putting up 13 runs. The College got on the board first, scoring two runs in the top of the second. Towson immediately tied it up by adding two of their own in the second inning. The Tigers then plated a run in the third for a 3-2 lead.

The College wasted no time coming back, and brought in three runs in the fourth, gaining a 6-3 lead. Towson added a run in both the fifth and sixth innings to make the score 6-5. The Tribe scored another run in the top of the eighth, extending its lead to two.

Unfortunately for the Tribe, Towson’s bats came alive in the bottom of the eighth inning as the Tigers plated eight runs off of seven hits. Towson began the inning with a strong offensive rally, its only out coming from a sacrifice bunt. The Tribe made a pitching change, putting in sophomore right-handed pitcher Daniel Powers. He got the College out of the inning without surrendering any more hits, but the damage had been done. The Tribe was only able to muster up one run in the ninth inning and lost 13-7.

The College evened the series the next day, winning at a close 6-5. The Tribe started out with juniors catcher Ryan Hissey and first baseman Charley Gould hitting back-to-back home runs in the first inning, giving the College a 3-0 lead. The Tribe put up two additional runs in the fourth inning, jumping out to a 5-0 lead, but Towson was productive in the fourth. The Tigers mustered up two runs, cutting the College’s lead to three.

After both teams went scoreless in the fifth and sixth innings, Towson began to mount a rally attempt. The Tigers added a run in the seventh to bring the score 5-3. The Tribe responded with a run in the top of the eighth, but Towson plated another pair of runs in the bottom of the inning. Entering the ninth, it was a one-run game, with the Tribe up 6-5. Junior right-handed pitcher Joseph Gaouette managed to earn the save for the Tribe, as he did not surrender any runs in the ninth inning and ensured the College’s victory.

After two tight games, both teams hoped to take the rubber game on Sunday. The College came out on top in an 8-3 win where it never trailed. Gould led the way for the Tribe, going three-for-three on the day, all of his hits being home runs. In Gould’s final appearance of the day, the Tigers decided to intentionally walk him to prevent him another hit out of the park. Gould ended the weekend with multiple hits every game, something the Tribe has struggled with through the season.

With three series against CAA foes under its belt, the Tribe sits in third place. Though its conference record is good, the College has yet to play North Carolina-Wilmington or the College of Charleston, the current top two teams in the CAA.

Next, the Tribe will play a single game against Longwood April 7 at 6 p.m. before getting back into conference play with a three-game series against UNC-Wilmington next weekend. All four of these games are on the road. The Tribe will not return to Plumeri Park until April 14 when it hosts in-state rival Old Dominion University.