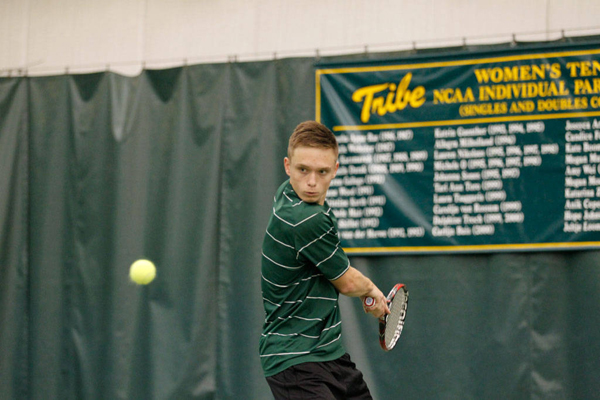 After losing in a devastating blowout match against No. 4 Virginia last Saturday, it was William and Mary’s turn to deal the blow: the College won 4-0 against Liberty at home Wednesday.

Currently, the Tribe sits at a 13-11 record for the season. Seven of those 11 losses were to nationally-ranked opponents. Liberty now holds a 12-9 record on the season; this loss to the College snapped the Flames’ two-match winning streak.

On the doubles side, the No. 3 duo of freshman Christian Cargill and sophomore Damon Niquet and the No. 2 duo of sophomore Addison Appleby and freshman Lars de Boer each posted scores of 6-3. Seniors Aaron Chaffee and Will Juggins did not complete their match at the No. 1 position, as the Tribe had taken the doubles point already. Cargill and Niquet together hold a 3-1 record as a pair on the season. Appleby and de Boer also currently hold a 3-1 record.

The College swept the singles. Juggins, playing at No. 2, won his match 6-2, 6-3, the greatest margin of the singles side. Wednesday’s match marked his sixth win at the No. 2 singles position. Niquet won 6-4, 6-3 against Liberty’s Egon Samaai; with this win, Niquet boasts a 5-1 record for his previous six matches.

Though freshman Alec Miller struggled through the first set of his No. 6 matchup, he eventually prevailed, posting a first-set score of 7-6 (1) after rattling off seven tiebreak points in a row. He dominated on the second set, finishing out the match with a 6-2 score on the final set. Miller now holds a 15-11 record for his ongoing rookie season. Appleby, Cargill and de Boer did not finish their matches. With the wins of Juggins, Niquet and Miller already secure, the Tribe’s victory was certain.

Next up for the Tribe is a home match against No. 48 Old Dominion. The match is scheduled for a 2 p.m. start Saturday at the Millie West Tennis Center and will also feature a tribute to the squad’s three seniors between the doubles and singles matches.