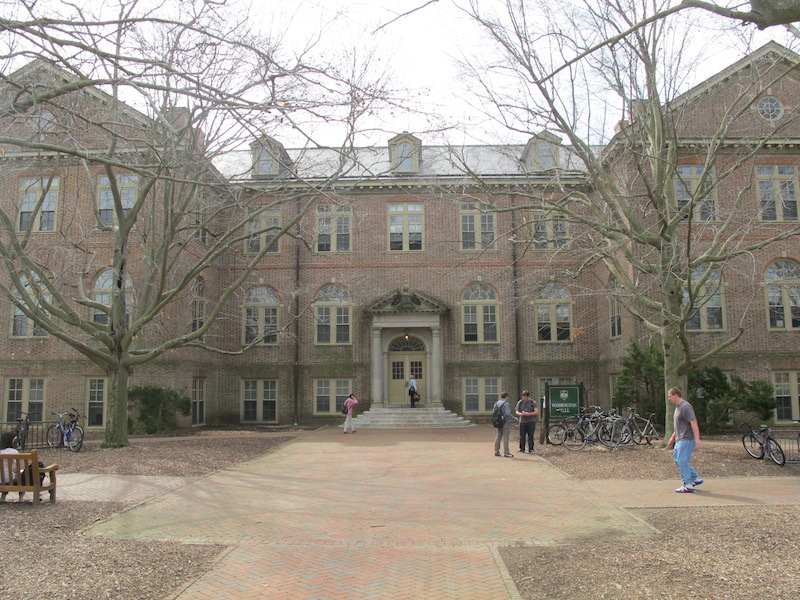 One of the academic buildings that faces the Sunken Gardens, Washington Hall is best known to William and Mary students for daily Arabic classes, embarrassingly referring to your French professor in the informal “tu” rather than the formal “vous” form and the occasional hopeful final exam the fourth-year Japanese student may leave feeling like they’re on the way to mastering their second language.

But was this always how students at the College saw Washington?

Washington Hall was built between 1928 and 1929 and was named for George Washington, who obtained a surveyor’s license from William and Mary in 1749 and served as the Chancellor of the College. The building was constructed as a companion to Rogers (now Tyler) Hall, fully equipped with a biology lab on the first floor and classrooms on the second and third floors. In 1960, a modern languages lab was added to the third floor with 50 individual soundproof booths and built-in tape recorders.

Brad Weiss, an anthropology professor at the College, recounts that nothing particularly unusual has occurred in his 22 years working in the building.

“I have worked in Washington Hall since 1993,” Weiss said in an email. “Other than an infestation of mold which the administration ignored, there is nothing of note. And the mold subsided, as well.”

Other than an infestation of mold which the administration ignored, there is nothing of note. And the mold subsided, as well.

In an email, Hispanic Studies professor Carla Buck recalls an unconventional class taught on the third floor of Washington.

“I remember that 307 used to have big storage drawers and, I think, a sink, because W&M used to offer home economics classes,” Buck said in an email.

Although Washington Hall may not be of much anecdotal interest to the students at the College, it houses some unusual and perhaps unknown institutes on its ground floor. Washington’s “forgotten” first floor is home to American Indian Resource Center, the anthropology department and the Institute for Historical Biology.

The American Indian Resource Center was founded in 1998 is run out of the office of anthropology professor Danielle Moretti-Langholtz.

Moretti-Langholtz said in an email that the institute is an important resource for academic research.

“[The institute] was founded to assist faculty and students with research that focuses on Native topics,” Moretti-Langholtz said in an email.

Moretti-Lagholtz has been working for ten years, in collaboration with other professors and researchers, to organize the Werowocomoco Project, the Brafferton Legacy Group and the Chickahominy River Project. Currently, Moretti-Langholtz is organizing an upcoming exhibit at the Muscarelle Museum about the history of the Brafferton Indian School, which will debut in the fall of 2016.

The Institute for Historical Biology is another hidden gem underneath Washington’s second- and third-floor language classrooms. The Institute is dedicated to developing our understanding of how diverse societal conditions in history manifested in the physical, biological characteristics of human beings. The Institute works at archaeological sites under government contract, as well as with private clients, and regularly assess human skeletal remains.

One of the most well-known projects at the Institute is the Remembering Project, a collaboration of memorial events, exhibits and research projects that recognise the history of those of  African descent in and around our campus.

Next time you climb the monstrous foyer steps in a hurry for  Chinese 101 at 8AM, take a second to look at what was once a biology lab. Even better, venture to the ground floor and you’ll find plaster human skulls in glass cases, Indonesian masks along the walls and rooms full to the brim with cardboard boxes of archaeological artifacts. Because we trip over hundred-year-old bricks and spot colonial-garbed commuters in green VW bugs every morning, it is not easy to forget the history of our campus. Some of that history may less visible, but is just as fascinating.