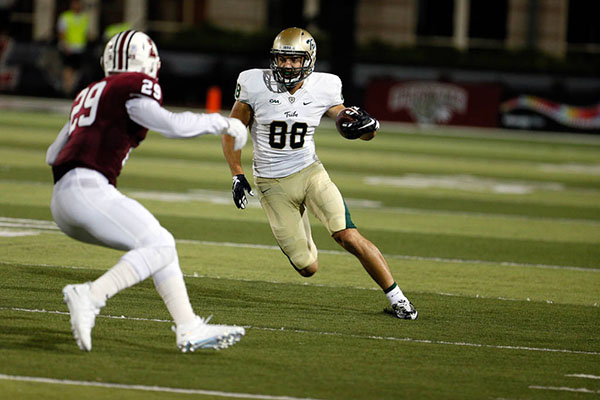 Offensive line: In the 2014 campaign, the original offensive line was dismantled by injuries to all five positions. This season, everyone is healthy; last year’s injuries have given the Tribe some advantage by having the second-stringers already retain solid experience other than just spring and summer practice.

Despite the health of the line, the unit allowed Lafayette to sack Cluley twice during Saturday’s game for a total loss of 17 yards. However, in the 30 pass attempts in the game, Cluley still had enough valuable time in the pocket to complete 20 of his passes. Last season, the line allowed 35 sacks for 269 total lost yards, some of which contributed to heartbreaking losses against James Madison and Villanova. Now, with the line healthy, there is extra pressure to perform and allow the offense to succeed by giving Cluley time to make successful and smart plays, and create running lanes for the tailback.

“In my opinion, we have a two-deep line,” senior tailback and captain Mikal Abdul-Saboor said. “We’re going to lean on the line this year; they’re going to carry our offense and we’ll only go as far as they can take us.”

Receivers: Back in April, the annual Green and Gold scrimmage showed a William and Mary team without star wideouts Tre McBride ’15 and Sean Ballard ’15, and thus illustrated a need for new receivers to step up. Many expect sophomore receiver DeVonte Dedmon to start in some games this year, but he was not present for any plays in Saturday’s win. Instead, junior Daniel Kuzjak and senior Christian Reeves were at the outside receiver spots in the starting lineup. Kuzjak had several successful plays in the spring game after a short period out for injury in March. Reeves made his first touchdown reception of the year Saturday after never catching one in 11 games last season.

Junior Kevin Hart was hurt for some of last season, but appeared in the season opener.

Last season, the Tribe averaged 172 receiving yards per game with a total of 12.4 per play. Eleven of the College’s touchdowns were made by receptions. One player specifically said he wants to step up as a receiver in addition to being a top rusher; that player is Mikal Abdul-Saboor.

“One thing [offensive coordinator] coach [Kevin] Rogers wanted me to work on over the offseason was that last year I wasn’t involved so much in the receiving game,” Abdul-Saboor said. “I think if I can do that, it adds more to the offense and more that we can do.”

As far as tight ends go, the Tribe started junior Eric Hensley and sophomore Andrew Caskin in the Lafayette game. Last year, Hensley appeared in nine games and averaged 11 yards per catch, but only made three catches on the season. Caskin appeared in 10 games, making five catches with an average of 15.4 yards per catch as well as a lone touchdown. It will be interesting to watch their development in the tight end position and how they will be utilized with the young receivers and Abdul-Saboor in the tailback position. If the Lafayette game is any indication, the Tribe will be primarily using double-tight end sets on offense.

Backs: Abdul-Saboor is the tailback for the Tribe once again after topping the 2014 CAA rushing charts with a net yardage of 1,266 over 249 carries. Averaging 115.1 yards per game, he had a few games with more than 200 rushing yards, and several others with more than 150 yards. Despite his dominance in the conference, he has extra goals for himself in his senior season.

“I want to be an All-American and to be top-five rushing in the nation,” Abdul-Saboor said. “I expect us to go to the playoffs this year, so I set my bar at 2,000 yards and 20 touchdowns. Last year it was 1,500 yards and 15 touchdowns and I missed a game, so I didn’t meet the goal, but I set it higher this year … I think this is realistic.”

It certainly does look realistic on the scoring side of the equation, as he already has two touchdowns and 103 yards over 17 carries in Saturday’s game, putting him on pace for 22 touchdowns on the season. However, Abdul-Saboor will have to increase his production on the ground, as he is on pace for only 1,100 yards at the start of the playoffs.

One of the most criticized parts of the offense is Cluley, who is now in his second year as the starting quarterback. In 2014, he threw four interceptions and had a 57 percent completion rate in 287 pass attempts. After working on passing through spring and summer, Cluley says much of the focus now is on mental training.

“I want things to be second nature to me, I don’t want to be thinking too much,” Cluley said.

“I want things to be second nature to me, I don’t want to be thinking too much,” Cluley said. “It’s being able to recognize defenses and understand our offense, not just ‘they have that and we have this’, its understanding why they have those things and what our offense can handle each play.”

Cluley’s offseason training will likely make large impacts on the success of this year’s team, as he is the man with the most experience of the roster right now. At Lafayette, he threw one interception, but also made two successful touchdown passes and a game-high longest pass of 58 yards in the 34-7 win. Cluley nearly hit the 300-yard mark with a 66.7 percent completion rate, a fairly strong start for 2015.  If he stays consistent, Cluley’s talent will rival that of the CAA’s top-rated quarterback, Villanova’s John Robertson.

“The experience of the quarterback I think says a lot in the league, people look at that,” Laycock said. “I think the league is so balanced from top to bottom that if you have a really good quarterback, then that’s the difference. The nuts and bolts on each team are very similar but the quarterback separates these teams.”

With Laycock backing Cluley for the second year, more pressure is on to produce results. Over the season, it will be a main storyline to follow Cluley’s progress after his offseason efforts and last season’s experience.