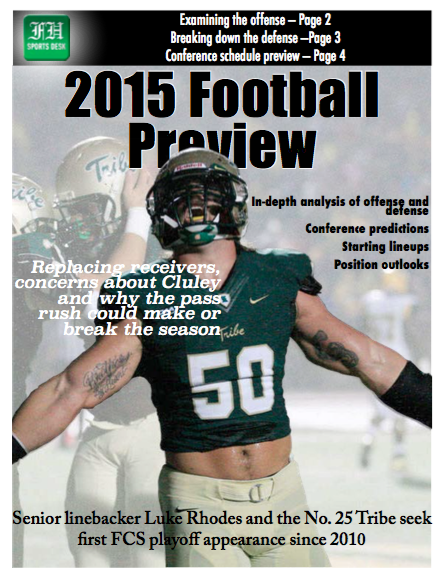 After last year’s 7-5, 4-4 CAA finish, William and Mary still hopes for qualification to the FCS Playoffs and a CAA Championship in 2015. The Flat Hat Sports editors previewed the offense and defense of the Tribe after the first game, a win over Lafayette. Click the links for the full analysis.

After a little more than half a decade of outstanding defense defining William and Mary football, including three Football Championship Subdivision top-10 squads (2009, 2010, 2013), the Tribe enters 2015 with more questions than answers on the defensive side.

Injuries struck every position last season, decimating what promised to be a premier unit and derailing the season with a home collapse against Richmond in the season finale with the Colonial Athletic Association playoffs on the line.  The College’s woes at cornerback against the Spiders were a microcosm of a frustrating season, as the Tribe was left with third-string players in the cornerback position.

It remains to be seen if the healthy 2015 defensive unit can top the mediocre performance of the injury-riddled 2014 squad. Last season the Tribe began with sky-high expectations off the strength of eight returning starters from a 2013 unit that ranked second in the nation in scoring defense and eighth overall in total defense. However, the College never came close to those numbers, finishing fifth in the 12-team CAA in scoring defense and a dismal ninth in the CAA in total defense

The main concern of the 2015 defensive unit is its youth. William and Mary graduated five starters last year, three of whom were defensive linemen. Two of those players, defensive end Mike Reilly ‘15 and defensive tackle Jasper Coleman ‘15, were signed by National Football League teams this past offseason. The Tribe also features two fewer All-CAA preseason picks than last season. Furthermore, the defense surrendered 322 yards against Lafayette, a concerning statistic given the Tribe’s upcoming schedule of higher caliber opponents, such as Richmond and James Madison.