Home Variety Behind the Brick Walls Morton Hall: The building everyone loves to hate 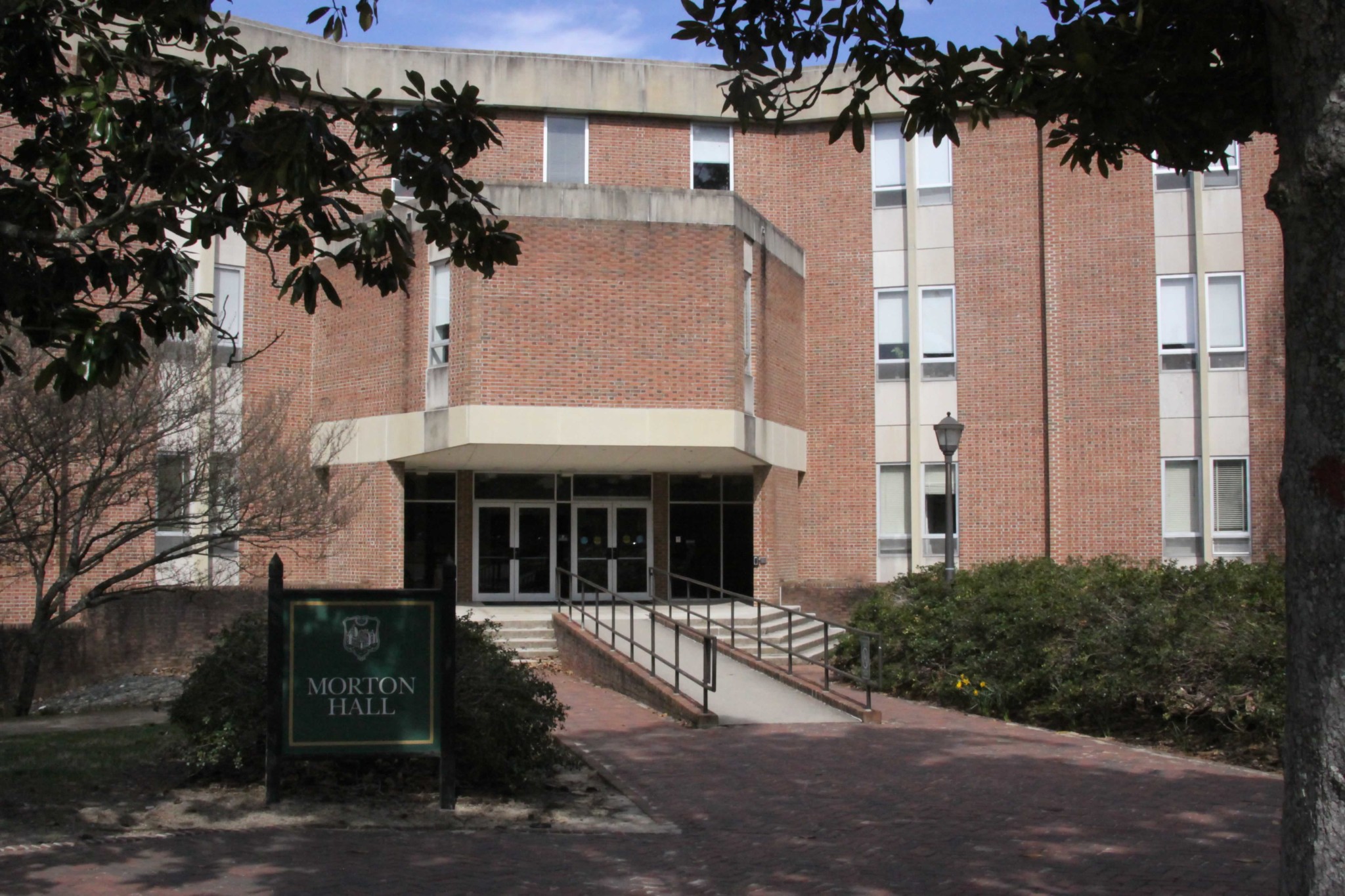 Some students hike the four flights of steep stairs, reaching the third floor huffing and puffing. Others risk the old elevator that seems like it could break at any minute. No one can tell if they’re late, on time or early because all of the clocks within view tell different times. Hundreds of students sit down for class in mismatched chairs in a building with questionable structural integrity.

Opened for use in 1972, Morton Hall has come to hold a rather special place in the hearts of students and professors.

“It’s the building everyone loves to hate,” professor of government Clay Clemens ’80 said. “It’s the Botetourt Complex of academic buildings. There’s only so much you can do with it.”

“It’s the Botetourt Complex of academic buildings. There’s only so much you can do with it.”

Once the renovation of Tyler Hall is finished, some of these departments are slotted to move there, while others are staying in Morton.

“Morton is not going away right away,” Director of public policy and professor of economics, public policy and law Sarah Stafford said. “We thought it would be great if we could auction off the rights to blow up Morton, but they’re not blowing it up. It has to stay for a while simply because we need the space. We need the classrooms and the offices.”

Morton was built during the College’s building boom in the 1970s and was one of the first buildings to be erected on New Campus.

It embodies what could be thought of as the New Campus aesthetic: boxy brick buildings with few windows that look like they could double as a bomb shelter or state prison.

“Morton was built during a time when matching old campus was not a thing anyone worried about,” Chancellor professor of economics Robert Archibald said.

Archibald has worked in Morton since 1976, just a few years after it opened. According to him, many of the departments currently housed in Morton were previously located in James Blair Hall, where professors did not have individual offices.

“Even though they seem small, the individual offices in Morton were as big as the state would allow to house one professor,” Archibald said. “It was actually an improvement from what it was like in James Blair.”

According to popular legend, Morton was built on a sinkhole and is progressively sinking deeper and deeper into the ground. Clemens said there was some truth to this legend at one point, as Facilities Management once had to pour concrete into the foundation of the building to stabilize it after it was discovered that it had settled into the ground over time in a way that created space between the building and the foundation.

“Be sure to give Facilities Management credit,” Clemens said. “Morton’s been held together by Band-Aids, but we’re still going.”

Archibald said that flooding was more of a problem than sinking into the ground.

“Rain drains toward Morton from all directions,” Archibald said. “We’re in a pit. The basement has flooded many times.”

Clemens, who has worked in Morton for 31 years and whose office is in the basement agreed and said they did experience flooding fairly often. However, he was quick to point out a benefit of Morton.

“Morton has been the workhorse of the College though, by virtue of having so many offices and so many classrooms,” Clemens said.

One of the biggest benefits of Morton, at least for faculty, is the ease of parking. Morton is located next to a large faculty and staff parking lot that the professors who are moving to Tyler said they will miss.

“It’s like an old shoe. You don’t want to show it off to your friends but it’s pretty comfortable to be in.”

Clemens said that while the building seems outdated now, he joked that it was once state of the art in some aspects.

“Morton was on the cutting edge in one respect,” Clemens said. “We were the first to get automatic flushing toilets.”

Professors and students share an affectionate distaste for Morton. While it’s not the most loved building on campus, there are memories housed there.

“It’s like an old shoe,” Stafford said. “You don’t want to show it off to your friends but it’s pretty comfortable to be in.”