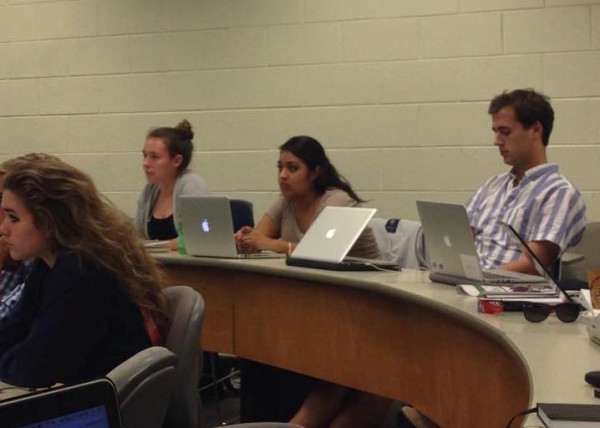 During its meeting Tuesday night, the Student Assembly senate approved conditional funds for WCWMFest, introduced the Homecoming Grant Act Round 5, and passed two bills after being one senator above quorum.

WCWMFest, hosted by the College of the William and Mary’s radio station WCWM, is a biannual music festival that began in 2012. This fall’s festival is scheduled to take place Sept. 27 during parent’s weekend. The Last Bison is expected to headline the festival.

“They’re a band from Chesapeake, Virginia,” WCWM events committee member Jim Burns ’18 said. “They’re essentially a local band with a national hit. They had the song ‘Switzerland,’ which was very popular at one point, got a lot of radio play.”

“Because of the time sensitivity of it, fully funding it does seem like it can be done,” Sen. Danny O’Dea ’18 said.

Two other musical performances are planned to appear as openers.

WCWM originally asked the senate for $11,000 but amended their request to $9000 after outlining each necessary cost. The senate is required to discuss all activities and events requests for more than $3000. Senators expressed their support for the event but questioned why WCWMFest does not receive funding from the Media Council and did not ask for funding for the event earlier.

“Because of the time sensitivity of it, fully funding it does seem like it can be done,” Sen. Danny O’Dea ’18 said. “I also don’t like setting a precedent of [that] you can come a week before the event, and, as long as it is fun, we will approve it. … I get the risk of saying that Media Council won’t match it, but I also sincerely believe that we shouldn’t be fully funding this event.”

“I am very concerned that this is a week and a half away, and you are just now requesting funding,” Fredrick said. “How do you expect to get that done in a week and half? For somebody who has to oversee your contracts and deal with that, I’m concerned about that process.”

The request to provide $9000 was approved unanimously by roll call with the non-binding stipulation that the Media Council could possibly reimburse SA for half of the cost and that SA, Media Council and WCWMFest have a conversation about funding.

Sen. Quetzabel Benavides ’16 introduced the Homecoming Grant Act Round 5, which allows the allocation of up to $10,000 for grants for student organizations recognized by the College.

Additionally, the senate passed two bills. The All about them shirts, bout them shirts, no sweaters Act, which allocates $4000 for homecoming t-shirts and creates a mechanism for students to submit their designs for the t-shirt, passed by unanimous consent. According to Sen. Eboni Brown ’17, the final t-shirt submissions will be voted on next Tuesday during the senate meeting.

The Jill Ellis Homecoming Act bill also passed by unanimous consent. The bill allocates money to pay for two vans to transport students to the women’s soccer game Sept. 25. Attendance is expected to be high because United States national women’s soccer team head coach Jill Ellis ’88 will speak during halftime. Bill sponsor Sen. Seth Opoku-Yeboah ’16 said that the cost for the vans has been lowered to $270.