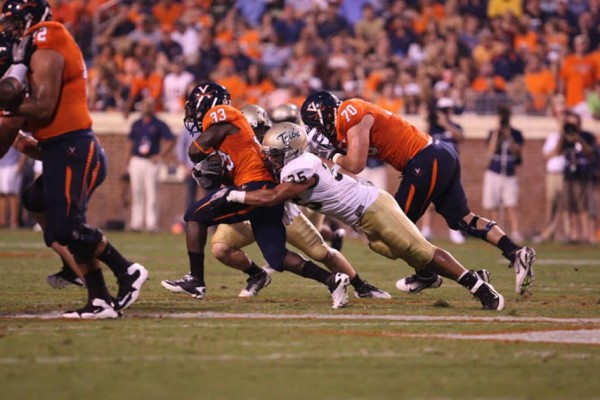 In his nearly four decades as William and Mary’s head coach, Jimmye Laycock has overseen many tough matchups against higher competition. Going into the biggest contest of the season versus in-state Football Bowl Subdivision rival Virginia Saturday, he sees no reason for his team to panic.

“If you’re a competitor than you want to do your very best,” Laycock said. “The bigger the stage the bigger the opportunity. I understand it’s a tremendous challenge, but I don’t think they’ll go in scared.”

“If you’re a competitor than you want to do your very best,” Laycock said. “The bigger the stage the bigger the opportunity.”

Riding the momentum from its opening week 34-7 thrashing of Lafayette, the Tribe (1-0) heads to Charlottesville, Va., with plenty of confidence. Awaiting the College’s arrival are the winless Cavaliers (0-2), who last week fell in heart-breaking fashion to then-No. 9 Notre Dame 34-27 following a 34-16 defeat at the hands of No. 10 UCLA. It will be the two teams’ 35th meeting on the gridiron, and while Virginia holds a 27-6-1 advantage overall, recent history would say the College has a realistic chance to pull the upset. In the 2009 opener, William and Mary scored 13 unanswered points in the second half to shock the Cavaliers with a 26-14 upset.

In order to mimic that result the Tribe will have to force Virginia to make mistakes and avoid making mistakes of their own. The 2009 game largely swung on the performance of the defense, which forced seven turnovers and limited the Cavaliers to less than 300 yards of total offense.

“We’re supremely confident,” senior defensive tackle Tyler Clator said. “Every week we go into a game with a lot of confidence because we trust our preparation. We prepare so much, we watch a lot of film, we go out, we run…we play so many tempo teams…and so we have to be in shape and we know that as players.”

Not only must the College’s defense stay sharp for all four quarters at Scott Stadium Saturday, but the offense has to be firing on all cylinders. Senior running back Mikal Abdul-Saboor should continue to do most of the heavy lifting after his 17 carry, 103 yard and two touchdown performance two weeks ago.

However when the Tribe does throw the ball, junior quarterback Steve Cluley must pass with supreme caution and poise. Virginia’s secondary is loaded, featuring three members of the Preseason All-Atlantic Coast Conference Team. Free safety Quin Blanding is the cream of the crop, the reigning ACC Defensive Rookie of the Year who had the most tackles of any freshman in the country last season. Cluley and his coach believe they can find success despite the Cavaliers’ intimidating talent on defense.

“I put on 25 pounds in the offseason,” Cluley said. “Last year I was beat up pretty bad, but when you’re strong you can be faster and more explosive, I feel my arm strength’s improved. And obviously weighing more, it’s less fun for them to hit you.”

Laycock then added his thoughts on Cluley.

“Steve’s been in some games now, so I feel pretty confident he’ll handle himself well,” he said.

William and Mary and Virginia are set to kickoff this afternoon at 3:30 p.m. The game will be televised on ESPN3.