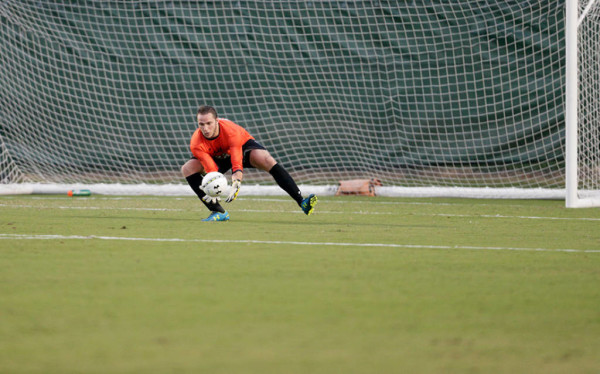 William and Mary had its first shutout of the season Tuesday night. However, the Tribe was also shut out, leading to a 0-0 draw after full regulation time and two overtime periods at Martin Family Stadium.

“[We were] disappointed not to have gotten a win, but the performance was good and Charlotte is a very good team, so a tie is not a bad result,” head coach Chris Norris said.

In the first half of regulation, the College (1-2-2) struggled to maintain possession, as the 49ers often kept the ball on the Tribe end of the field. Charlotte fired the first shot of the 110-minute match in the 13th minute, barely missing the goal as the ball bounced off the post. William and Mary’s first shot was by freshman midfielder Antonio Bustamante in the 22nd minute, but it was blocked before hitting its mark. Bustamante would add another attempt in the 27th minute which again was blocked by the 49ers back line. Toward the end of the half, Charlotte had a solid goal chance 39 minutes, 44 seconds in as the 49ers’ Tommy Madden hit a header toward the net only to be saved by the Tribe. The save was credited as a team save and was made by junior back Ryan Perry.

Entering the halftime break, Charlotte (2-2-1) outshot the College 5-4 with the lone shot on goal from the 40th minute.

As the second half began, the Tribe looked more confident than in its last game at No. 7 Coastal Carolina, surging from opening whistle to closing horn in what became a physical game. The period began with a yellow card on Charlotte at 47:22, the second of the night after junior forward Reilly Maw was issued one during the first half. Maw kicked the Tribe’s first shot on goal of the night, but the arc put the ball into the waiting hands of Charlotte keeper Austin Pack for the save. Charlotte battled through midfield on its next possession and launched another shot-on-goal, which was saved by junior keeper Mac Phillips. After the game, Phillips attributed the success to the Tribe backs.

“[The defenders] played great, they battled — they blocked shots, they got in the way of things, and that’s all you can ask from defenders as a goalie,” Phillips said. “To [have to] do the least amount of work possible is what you want, and they do that for me every game.”

“[The defenders] played great, they battled — they blocked shots, they got in the way of things, and that’s all you can ask from defenders as a goalie,” Phillips said. “To [have to] do the least amount of work possible is what you want, and they do that for me every game.”

William and Mary had another strong chance with Bustamante’s third shot, but it was high and hit the crossbar in the 59th minute. Maw made another shot on goal with 15 minutes remaining in regulation only to be denied by Pack once again. Immediately after, the 49ers drove down the field and headed a shot on goal toward the Tribe net, which was saved by Phillips once again. Phillips would go on to make five total saves in the course of the lengthy match.

“Mac is very explosive, he errs on the side of being aggressive, and that’s when he’s at his best,” Norris said. “I thought he was aggressive tonight and dealt with a lot of difficult situations, mostly service, but this is what we expect from Mac. He had this presence in goal two years ago, and I think he’s so much better now than he was at that point.”

Before the end of the second half, four yellow cards were issued. Two went to the College — freshman midfielder Marcel Berry at 82:17 and sophomore midfielder Riley Spain at 83:24. As regulation ended, the game remained scoreless for both squads. Charlotte had a 7-5 shot advantage in the second half, and the Tribe had four saves.

Although the fans began to depart at the start of overtime, the 22 players on the field persevered to the bitter end. The overtime periods were each 10 minutes of golden goal-style play. Maw got the Tribe’s lone shot off at the first overtime at 94:13, but it was blocked. The game’s seventh and final yellow card came in the 99th minute and was issued to senior forward Jackson Eskay.

Characteristic of the entire night, Maw continued to be the man with shot chances, making two attempts in the second overtime before being substituted out of play after a rough collision with a Charlotte player. Maw was able to get up and walk off of his own accord as freshman forward John Fuquene was brought in for the final two minutes. The last major play of the game was a blocked Charlotte shot at 108:29. The match ended in a 0-0 draw.

“It was a high intensity match [and] was a lot of emotion, Phillips said. “It was good to see that we were battling more. It was fun to watch, there was a lot of action.”

Overall, Charlotte outshot William and Mary 17-12 and 5-2 on shots on goal. Phillips made five of the Tribe’s six saves while Pack made both of the 49ers saves. Along with the seven combined yellow cards, there were 31 fouls in the match.

“We had an uncharacteristically low number [of yellow cards], not just for us but for any college soccer team, through the first four games,” Norris said. “We wanted to walk the line a little bit more in terms of having the right sort of intensity. Cards aren’t necessarily a bad thing if they’re taken for the right reasons.”

With the draw, the College retains only one win so far, with the other games split at two losses and two draws.

This is just the second home match of the 2015 season, but the next is not until Sept. 30 in a conference game against Elon. Until then, the College is on the road for three games —Longwood Sept. 19, Navy Sept. 22, and the start of Colonial Athletic Association play at College of Charleston Sept. 26.

“It’s easy to mentally prepare yourself when you’re playing big name opponents … It’s a little bit harder when playing other mid-majors like we’re going to do in the next stretch of games,” Norris said. “It’ll be a different challenge … and based on our early season schedule we should be very well prepared for the rest of our games.”